CEBU CITY, Cebu, Philippines — It was already 4 p.m. when Tej, a government employee, arrived at a quarantine site at South Road Properties in Cebu City. He was anxious at what awaited him during his two-week stay at New Normal Oasis for Adaptation and a Home (Noah) Complex.

After filling out forms, Tej was led to his room — about 7 feet by 6 feet — with a wooden bed comfortable enough for his 5-foot 5-inch frame and a small table, but no TV set, no radio, no internet connection.

After he was given a mattress, he was told where to find a mop and a broom to clean his room. “Just return them to where you took them,” he was told.

Looking at his windowless accommodation inside what was once a movie studio, he realized that he might just have to fight loneliness and depression, and not just the new coronavirus disease (COVID-19), during his stay at Noah.

The complex sits on a 6,600-square-meter lot leased by Bigfoot Productions, a world-renowned production company, to accommodate COVID-19 patients who are asymptomatic and classified as mild cases. The city government released P50 million to put up the beds, mess hall, equipment and showers, as well as buy food for patients and volunteers. 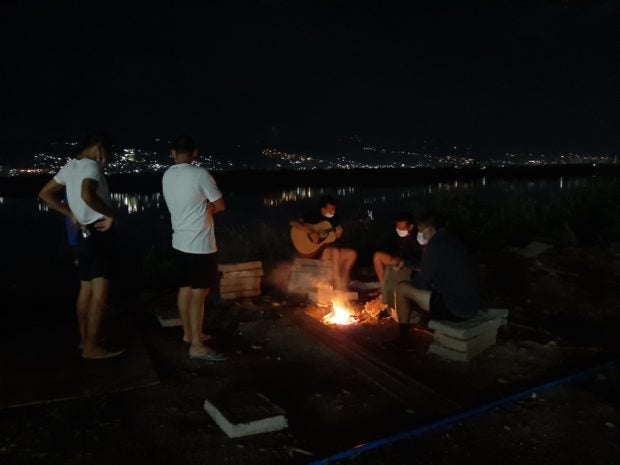 BONDING BY THE FIRE To fight off boredom, people staying at New Normal Oasis for Adaptation and a Home (Noah) Complex in Cebu City bond over music and share personal stories by a bonfire. —CONTRIBUTED PHOTOS

Joy Pesquera, Noah manager, said the center had taken in more than 600 patients since it opened on June 29. As of July 28, Noah was looking after 253 patients, 140 of them policemen.

The complex of two warehouse structures has 100 maintenance staff and 42 medical personnel, including six doctors, three of them consultants, and 40 nurses working on shifts, Pesquera said.

Inside the buildings are rows of rooms that look like cubicles made of tarpaulin, usually used in standees, with shower curtains as doors, according to Tej. Between rows is an industrial fan while the main door is left open to allow air to get in. There is also a giant ceiling fan in the middle of the building.

Outside is a vast empty space where patients walk around, jog or play volleyball.

Since the facility is near the coastline, Tej likes staying outside to enjoy the sea breeze especially in the afternoons when the heat becomes overbearing inside his room. 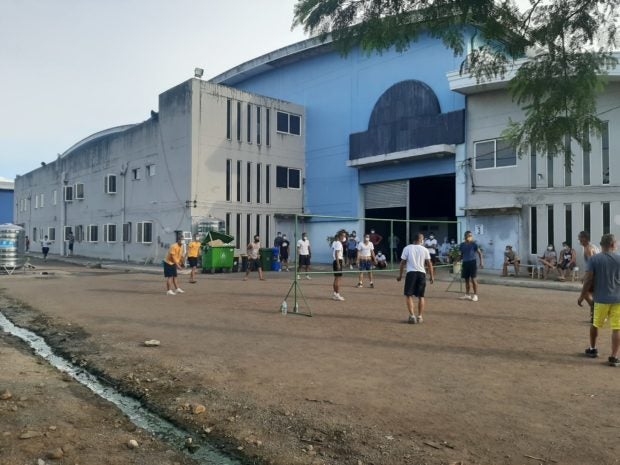 FRIENDLY GAME Playing a friendly game of volleyball is among the pastimes of “residents” of Noah Complex.

A group of policemen would do morning and afternoon exercises while chanting. “It’s like a police barracks here,” said Tej, who had made friends with other “residents.” One of his friends was Ariel, a security guard who, like Tej, was asked to clean his own room upon settling in.

There are doctors and nurses in personal protective equipment (PPE), but patients must take their own temperature and oxygen levels using a thermal gun and oximeter supplied by the facility.

There are no regular visits from doctors or nurses, but one is available upon a patient’s request, Ariel said.

“We are not a hospital,” said Pesquera. But she gave assurance that the medical staff were conducting random checkups while “cubicle leaders” were monitoring patients in their areas.

The city also provides patients packed meals of rice and two dishes—usually vegetables and meat—served thrice a day with 500 milliliters of water each.

“Sometimes, the food was not enough. We can ask for additional packed meals if there are extra,” said Ariel, 39. 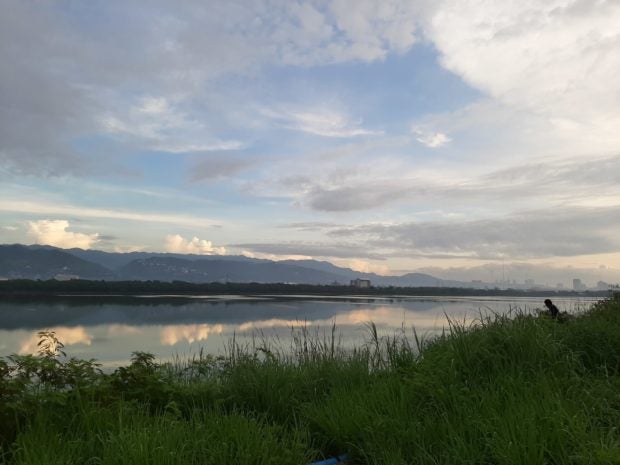 On his first night, he ate the sliced bread he brought with him because he was hungry by midnight. The next day, he asked people from his security agency to bring him water, cup noodles and biscuits.

Pesquera said the facility’s budget only allowed one packed meal per patient whose stay there was free. It also relies on donations from the private sector, especially PPE, hygiene kits and alcohol.

In a section of the facility are rows of 24 bathrooms—12 shower rooms with blue doors exclusively for women and another 12 with green shower curtains for men. Ariel said water supply would run out periodically, especially when many people are using the bathrooms, or when they do their laundry.

“There are a lot of policemen here who exercised a lot and washed their clothes a lot. It’s normal that we run out of water sometimes. You just have to wait a little for the supply to come back,” he added.

Nearby is a row of faucets with stainless sinks mounted on a fabricated steel stand. A few meters away are the clotheslines.

Behind the bathing area are 24 “portalets,” equally divided for use of male and female patients, but without running water. Using the portalets has become a challenge as many users leave them dirty, said Ariel and Tej.

Ariel said patients were supposed to clean up after use since there was no maintenance personnel around. But some just don’t.

When many complained about the dirty toilet, a meeting was held to remind the patients about the need to clean up.

Pesquera said they asked patients to help maintain the cleanliness of portalets because their staff could only clean these every other day to save on PPEs. She said they could not build proper toilets in the facility since they needed to work around Bigfoot’s existing structures. 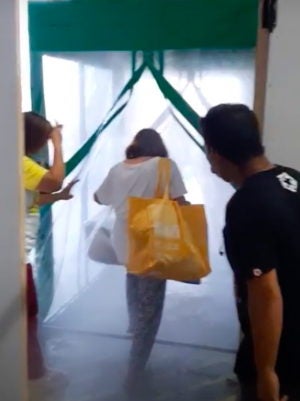 FINAL RITE A recovered COVID-19 patient passes through a disinfection tent prior to release from Noah Complex.

“It is not perfect,” Pesquera said. “They have to accept this is their temporary home. They should help clean up.”

Tej shares his excess supply of food, water and other essentials sent in by his friends to his “neighbors” who have little. Groups of patients eat together at mealtime, sharing whatever food they have.

In the evening, some would go out and hold a little bonfire. Someone plays the guitar while others sing.

“There is no discrimination here because everyone is COVID-19 positive,” joked one of the patients.

Still, they look forward to going home and be reunited with their families. Asked how they would know that they are about to leave, Ariel said patients usually receive a text message on their scheduled departure.

But there is no “reswabbing” among “graduating” patients because, according to a new Department of Health circular, it is no longer necessary if the patient has been asymptomatic for more than 10 days, Pesquera said.

During the “graduation rites,” each patient steps out of a plastic tent after getting mists by a disinfectant sprayer as his or her name is called. The staff cheer for them outside the tent while the sound system blares music, including Diana Ross’ “I’m coming out.”

After a short talk, they are handed certificates that they are fit to work.

“That is what I look forward to,” said Ariel, who was raring to get back to work and provide for his wife and two children.