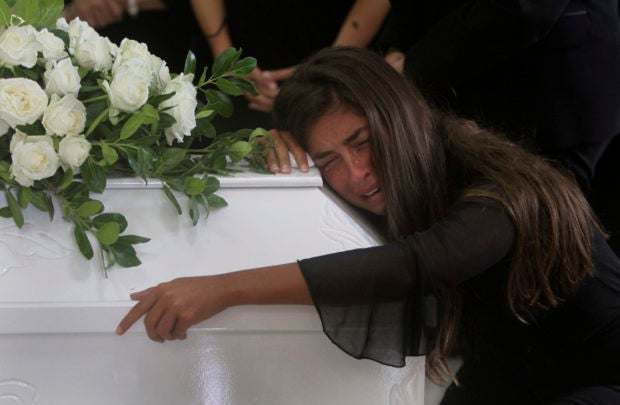 The sister of Nicole al-Helou, who was killed by the explosion Tuesday that hit the seaport of Beirut, mourns on her coffin during her funeral, in Sarba village, southern Lebanon, Thursday, Aug. 6, 2020. French President Emmanuel Macron said an independent, transparent investigation into the massive explosion in Beirut is “owed to the victims and their families” by Lebanese authorities. During Macron’s visit to the city on Thursday, angry crowds approached him and the Beirut governor as they walked through a blast-torn street. (AP Photo/Mohammed Zaatari)

BEIRUT — Lebanon’s state-run news agency said 16 employees at Beirut’s port have been detained over this week’s explosion that killed more than 100 people and wounded thousands.

The National News Agency quoted Government Commissioner to the Military Court Judge Fadi Akiki as saying on Thursday that 18 people have been questioned so far. All of them are port and customs officials, as well as individuals in charge of maintenance at the hangar where 2,750 tons of explosive materials have been stored for years.

Akiki said that the investigation began shortly after the blast occurred on Tuesday evening and will continue to cover all suspects in the explosion.