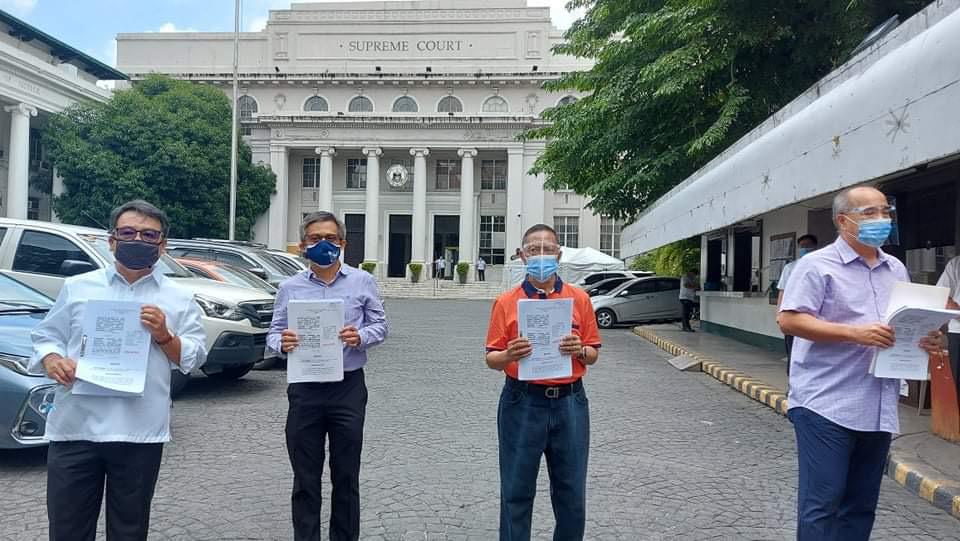 Former Vice President Jejomar Binay (Third from left) joins the other convenors and members of the Concerned Lawyers for Civil Liberties (CLCL) in calling for the junking of the Anti-Terrorism Act of 2020. Photo: JUCRA pool

MANILA, Philippines — Former vice president Jejomar Binay, former senator Rene Saguisag and other lawyers from the Concerned Lawyers for Civil Liberties (CLCL) joined the call for the Supreme Court to nullify the Anti-Terrorism Act (ATA) of 2020.

Named respondents in the petition are Executive Secretary Salvador Medialdea, the Senate represented by Senate President Vicente Sotto III, and the House of Representatives represented by Speaker Alan Peter Cayetano.

While the petition is pending, the petitioners urged the high court to stop the implementation of the law.

This is the 25th petition against the controversial measure and not the first one to ask for a restraining order.

The petition cited three main grounds to declare the law unconstitutional: vague, infringement of right to due process and violation of the equal protection clause.

“If not so voided, the assailed statute will run roughshod over the 1987 Constitution, particularly its salient provisions on the Bill of Rights,” the petition said adding that the very vagueness of the language of the law creates a “chilling effect” because of the wide latitude it gives to law enforcers.

Like the previous petitions, the group said Section 29 of the law that allows the Anti-Terrorism Council (ATC), composed of officials from the Executive Department, to authorize law enforcers or the military to take custody suspected terrorists without the benefit of a warrant of arrest issued by the court contradicts the due process requirement set by the Constitution.

“The due process clause requires the existence of a probable cause before a warrant of arrest is issued. The ATA grants the ATC the power to issue the authority to take into custody a person based only on mere suspicion, which would put in constant danger the rights of persons under the Bill of Rights of the Constitution,” the petitioners said.

(It is somewhat scary that you can be easily charged as terrorist, just like that. It is not right that the law is blurry and we’ll just allow the law enforcement to interpret it.)

Petitioners pointed out that “the authority issued by the ATC to arrest suspected terrorists is not a substitute to the warrant of arrest under the Constitution.”

“It short-circuits the right to due process under the Bill of Rights and must be impugned as a repugnant violation of fundamental rights,” the petitioners added.

On why it violates the equal protection clause, petitioners said: “The law’s provisions would deny due process to suspected terrorists. The ATA further does not show any indication of the existence of any public emergency that would require the need for special treatment of suspected terrorists. The ATA unnecessarily carves out the crime of terrorism as outside the realm of the criminal justice system, which is violative of the equal protection clause.”