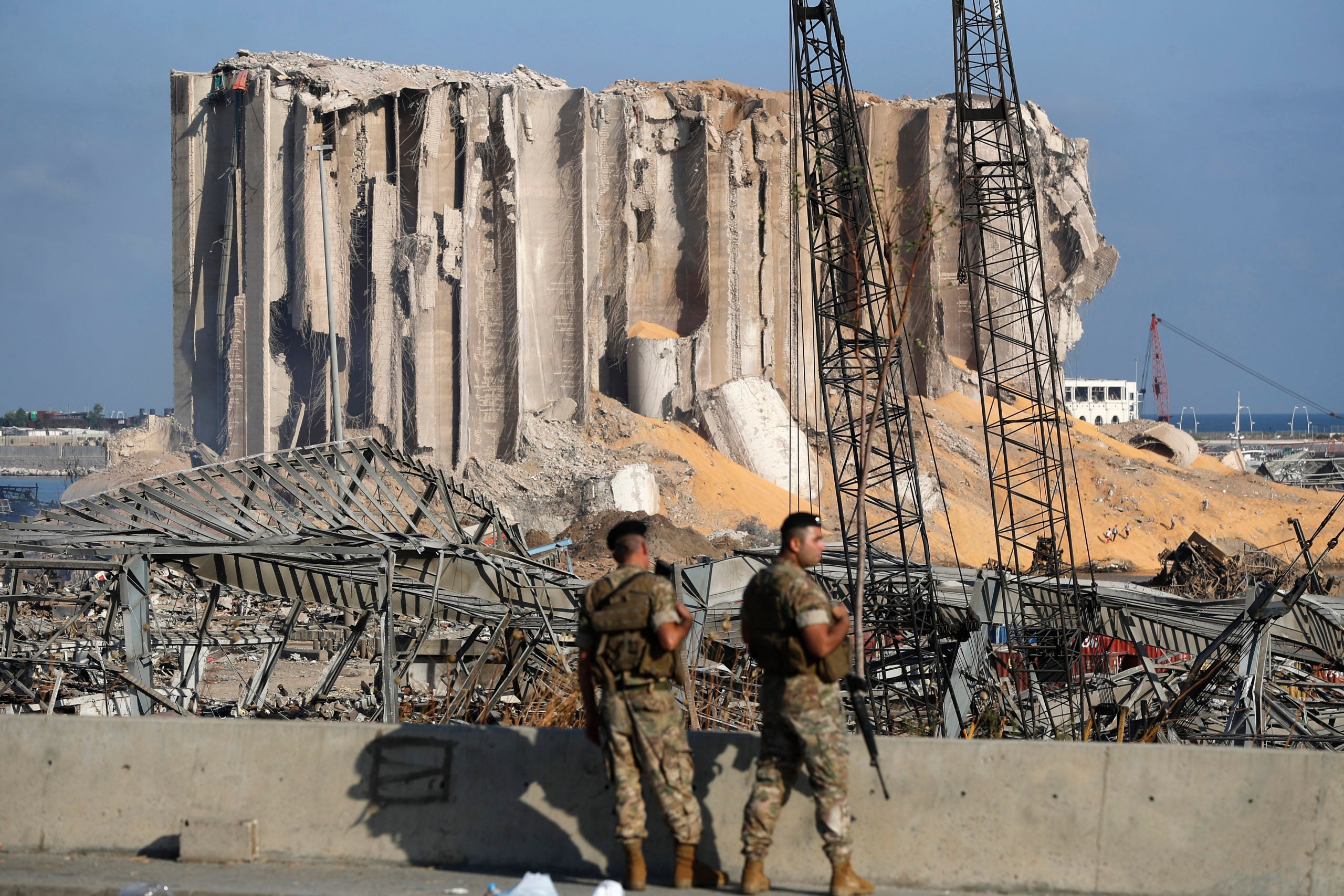 Lebanese army soldiers stand guard at the scene where an explosion hit on Tuesday the seaport of Beirut, Lebanon, Thursday, Aug. 6, 2020. Lebanese army bulldozers plowed through the wreckage to reopen roads around Beirut’s demolished port on Thursday as the government pledged to investigate the devastating explosion and placed port officials under house arrest. (AP Photo/Hussein Malla)

BEIRUT  — Lebanese army bulldozers plowed through the wreckage to reopen roads around Beirut’s demolished port Thursday, a day after the government pledged to investigate this week’s devastating explosion and placed port officials under house arrest.

The blast Tuesday, which appeared to have been caused by an accidental fire that ignited a stockpile of ammonium nitrate at the port, rippled across the Lebanese capital, killing at least 135 people, injuring more than 5,000 and causing widespread destruction.

French President Emmanuel Macron was expected to visit later Thursday amid pledges of international aid. But Lebanon, which was already mired in a severe economic crisis, faces a daunting challenge in rebuilding. It’s unclear how much support the international community will offer the notoriously corrupt and dysfunctional government.

Losses from the blast are estimated to be between $10 billion to $15 billion, Beirut Gov. Marwan Abboud told the Saudi-owned TV station Al-Hadath on Wednesday, adding that nearly 300,000 people are homeless.

The tiny Mediterranean country was already on the brink of collapse, with soaring unemployment and a financial crisis that has wiped out people’s life savings. Hospitals were already strained by the coronavirus pandemic, and one was so badly damaged by the blast it had to treat patients in a nearby field.

Anger is mounting against the political class that has dominated the country since the 1975-1990 civil war, which has long been seen as hopelessly corrupt and incapable of providing even basic services like electricity and trash collection.

The investigation is focusing on how 2,750 tons of ammonium nitrate, a highly explosive chemical used in fertilizers, came to be stored at the facility for six years, and why nothing was done about it.

The Port of Beirut and customs office are notorious for being among the most corrupt and lucrative institutions in Lebanon, where various factions and politicians, including the Iran-backed Hezbollah militant group, hold sway.

Fueling speculation that negligence was to blame for the accident, an official letter circulating online showed the head of the customs department had warned repeatedly over the years that the stockpile of ammonium nitrate was a danger and had asked judicial officials for a ruling on a way to remove it.

The cargo had been stored at the port since it was confiscated from a ship years earlier. Based on the timeline and the size of the cargo, that ship could be the MV Rhosus. The ship was initially seized in Beirut in 2013 when it entered the port due to technical problems, according to lawyers involved in the case. It came from the nation of Georgia and had been bound for Mozambique.

The stockpile is believed to have detonated after a fire broke out nearby.

It caused the most powerful blast ever seen in the city, which has survived decades of war and conflict. Several city blocks were left littered with rubble, broken glass and damaged vehicles.

Authorities have cordoned off the port itself, where the blast left a crater 200 meters (yards) across and shredded a large grain silo, emptying its contents into the rubble. Estimates suggested about 85% of the country’s grain was stored there.

Lebanon is highly dependent on imports, and the destruction of the port, along with the worsening cash crisis, has raised fears of shortages.

Two planeloads of French rescue workers and aid were sent to Beirut, and Macron was to arrive Thursday to offer support for the former protectorate. The countries retain close political and economic ties.

Other countries, including Greece, Qatar, Kuwait, Turkey, and the European Union, have dispatched medical supplies, humanitarian aid, and search-and-rescue teams.