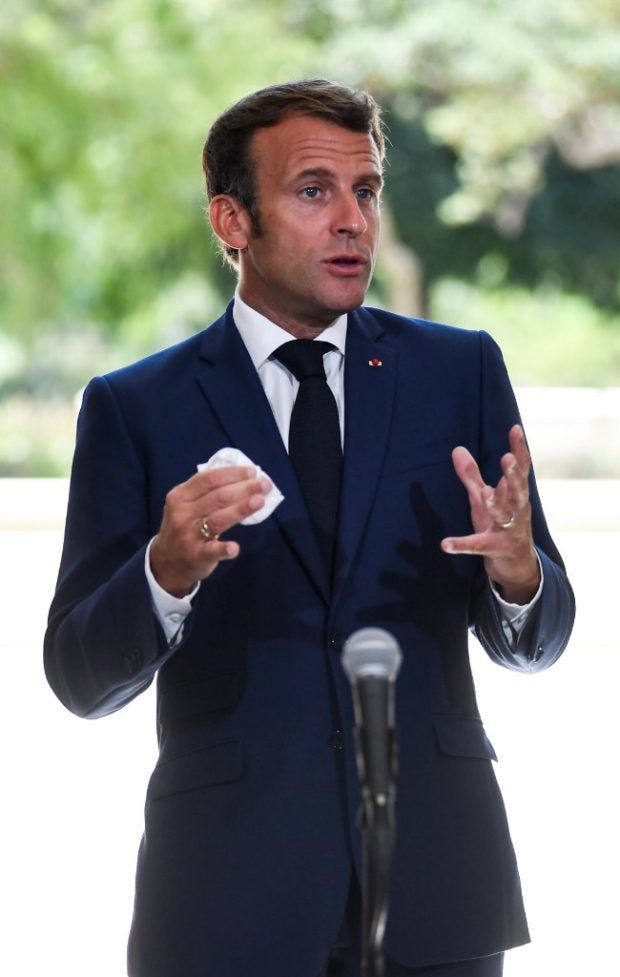 The highest-ranking foreign official to visit the country since Tuesday’s tragedy, Macron will visit the site of the blast that obliterated part of Beirut port and ripped through entire neighbourhoods of the city.

Two days on, Lebanon was still reeling from a blast so huge it was felt in neighbouring countries, its mushroom-shaped cloud drawing comparisons with Hiroshima and the devastation caused by its shockwave with the scene of an earthquake.

The provisional death toll stood at 137 but with dozens missing and 5,000 wounded, the number of victims was expected to rise as rescue workers continued to comb through the rubble.

According to several officials, the explosion was caused by a fire igniting 2,750 tonnes of ammonium nitrate fertilizer stored in a portside warehouse.

“Apocalypse,” “Armageddon” — Lebanese were lost for words to describe the impact of the blast, which dwarfed anything the country had ever experienced despite its violence-plagued history.

The Beirut governor estimated up to 300,000 people may have been made temporarily homeless by the destruction, which he said would cost the debt-ridden country in excess of three billion dollars.

Even as they counted their dead and cleaned up the streets, many Lebanese were boiling with anger over a blast they see as the most shocking expression yet of their leadership’s incompetence and corruption.

“We can’t bear more than this. This is it. The whole system has got to go,” said 30-year-old Mohammad Suyur as he picked up broken glass in Mar Mikhail, one of the most affected districts in Beirut.

Many questions were being asked as to how such a huge cargo of highly explosive material could have been left unsecured in Beirut for years.

Prime Minister Hassan Diab and President Michel Aoun promised to put the culprits behind bars but trust in institutions is low and few on the streets of the Lebanese capital held out any hope of an impartial inquiry.

Human Rights Watch on Thursday supported mounting calls for an international probe as the only credible option.

“An independent investigation with international experts is the best guarantee that victims of the explosion will get the justice they deserve,” the watchdog said.

In France, prosecutors on Wednesday opened a probe into the blast over injuries inflicted to 21 French citizens.

Paris spearheaded international mobilisation in support of Lebanon, which will mark its centenary next month but has looked like a country on its last legs since defaulting on its debt earlier this year.

Flights carrying medical aid, field hospitals, rescue experts and tracking dogs have been flying in since Wednesday to Beirut airport, which sustained no serious damage from the explosion.

Besides the international emergency effort, the aftermath of the terrible explosion yielded countless uplifting examples of spontaneous solidarity.

Much of the cleanup was being handled by volunteers who improvised working groups, bringing their own equipment and making appeals for help on social media.

“We’re sending people into the damaged homes of the elderly and handicapped to help them find a home for tonight,” said Husam Abu Nasr, a 30-year-old volunteer.

“We don’t have a state to take these steps, so we took matters into our own hands,” he said.

An unprecedented nationwide and cross-sectarian protest movement that erupted on October 17 last year had looked for a moment like it could topple what it considers a hereditary kleptocracy.

The euphoria faded as change failed to materialise and the combination of economic hardship and the coronavirus pandemic left the revolution in tatters.

The revulsion at Tuesday’s tragedy and its implications could rekindle the flame however and activists’ social media accounts were rife with calls for a new push to remove Lebanon’s widely reviled political leaders.

“Lebanon’s political class should be on guard in the weeks ahead,” Faysal Itani, a deputy director at the Center for Global Policy, wrote in an opinion piece for the New York Times.

“Shock will inevitably turn to anger.”