newsinfo / Headlines
Headlines
MAY BE STRANDED FOR DAYS OR EVENWEEKS 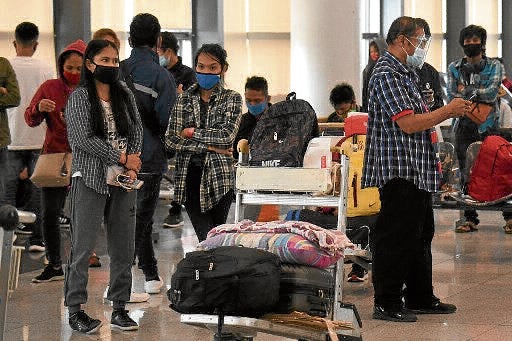 STRANDED Airplane passengers wait for updates on their flights at the airport in Manila on Aug. 4. —AFP

MANILA, Philippines — Broke and jobless, Ruel Damaso is sleeping on cardboard and surviving on food handouts at a Manila airport where dozens were left stranded after a partial coronavirus lockdown was reimposed on Tuesday.

More than 27 million people in the capital and four surrounding provinces were given 24-hours notice of the new restrictions that have shut many businesses, halted public transport and grounded flights as the government struggled against a COVID-19 surge.

Struggling to survive on part-time factory work after the first lockdown in March crippled the economy and stripped millions of their jobs, Damaso decided to leave Manila.

With nowhere else to stay, he arrived at the airport on Saturday with two former colleagues and was supposed to fly home on Tuesday to the southern city of Zamboanga.

Now, he is stuck at the terminal, where staff wearing white protective suits, face shields and masks deal with the stranded passengers.

“We’ve run out of money. We can’t leave the airport because we don’t have any relatives here,” the 36-year-old told Agence France-Presse (AFP) inside the terminal, a towel wrapped around his shoulders for warmth in the freezing air conditioning. “We will have to stay here for two weeks until our flights are back on.”

President Duterte reluctantly reimposed stay-at-home orders and other measures in response to a plea from overwhelmed health workers, who had warned that the country was losing the battle against the virus.

The number of cases in the Philippines has surged past 100,000—a fivefold increase from June when the country emerged from one of the world’s longest lockdowns.

It is now reporting several thousand new cases every day—the 6,352 on Tuesday was a record-high.

The government has blamed people flouting virus protocols for the sharp increase in infections, which have been concentrated in Manila and the central city of Cebu.

In a bid to curb rampant local transmission, police have been deployed to force people who have tested positive for the virus and cannot self-isolate at home into government-run quarantine facilities.

Now, police are back on checkpoints to ensure only people with special travel passes to work, or go shopping for essential items, are moving around. Everyone else is supposed to stay home.

The new measures—affecting a quarter of the country’s population—have shuttered much of the Philippine economy, presidential spokesperson Harry Roque said, as he warned of a “big drop” in economic activity in the first half.

Many people from the provinces are trying to leave Manila, but mandatory COVID-19 testing has made it difficult.

After losing their jobs, Gina Balos and her family had planned to fly to the southern city of Butuan, the closest airport to their hometown on Dinagat Island.

They used their savings to buy the tickets, abandoned their house in a slum where they were five months behind on the rent, and sold some of their furniture to pay for the transport to the airport.

But they had no money left to cover the cost of the virus tests and were not allowed to board their flight on Monday. Then the lockdown was imposed.

“We’ve been stranded here since yesterday because of the rapid test requirement in our province. It’s too expensive for the 11 of us,” said Balos, 45. “We have no more money. We also have a pregnant relative who’s due this August.”