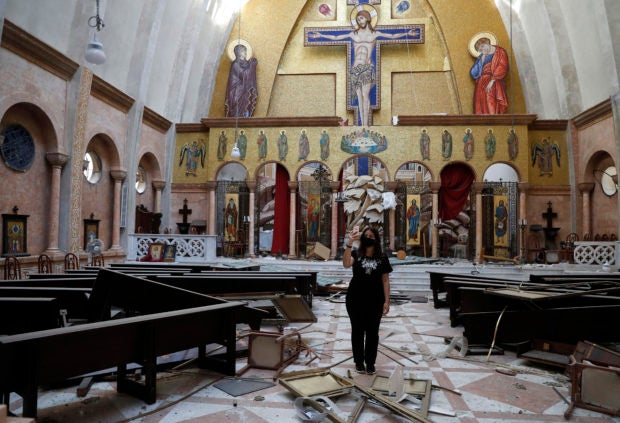 A woman takes pictures by her mobile phone for a damaged church, after an explosion hit the seaport of Beirut, Lebanon, Wednesday, Aug. 5, 2020. Residents of Beirut awoke to a scene of utter devastation on Wednesday, a day after a massive explosion at the port sent shock waves across the Lebanese capital. (AP Photo/Hussein Malla)

BEIRUT — Pope Francis has offered prayers for the victims, their families, and for Lebanon after the enormous explosion in Beirut’s port on Tuesday. At least 100 people were killed and thousands injured.

The pontiff appealed that ‘’through the dedication of all the social, political and religious elements,’’ Lebanon “might face this extremely tragic and painful moment and, with the help of the international community, overcome the grave crisis they are experiencing.’’

International aid would be heading to Beirut, with Poland sending a team of about 50 firefighters, including 39 rescuers with four dogs and a chemical rescue module. A Greek military transport plane would likewise be heading to Lebanon with a search and rescue team with specialized equipment and a sniffer dog, while Cyprus said it will be sending help.

Russia’s Ministry for Emergency Situations would send rescuers, medical workers, a makeshift hospital, and a lab for coronavirus testing.

France, Jordan, and other countries said aid is also on the way.