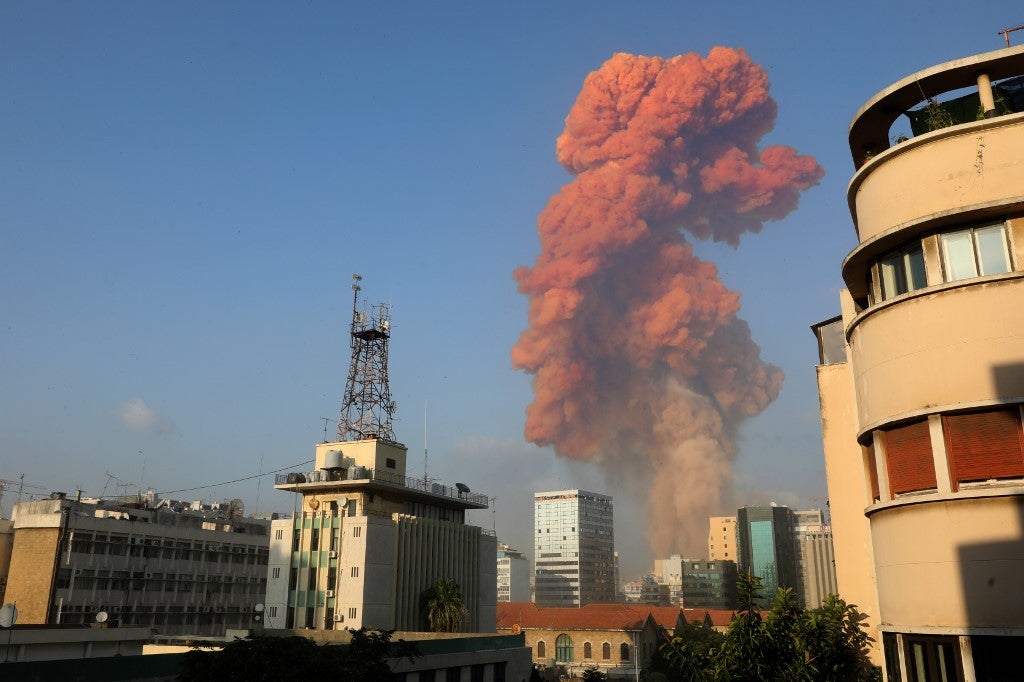 A picture shows the scene of an explosion in Beirut on August 4, 2020. – A large explosion rocked the Lebanese capital Beirut on August 4, an AFP correspondent said. The blast, which rattled entire buildings and broke glass, was felt in several parts of the city. (Photo by Anwar AMRO / AFP)

BEIRUT, Lebanon — The mega-blast that tore through Lebanon’s capital with the force of an earthquake, killing more than 100 people and injuring over 4,000, resulted from the ignition of a huge depot of ammonium nitrate at Beirut’s port, officials say, but many questions remain.

Here is what we know so far.

An initial large explosion in the port area of Beirut took place around 6:00 pm (1500 GMT), resulting in a fire, several small blasts and then a colossal explosion that flattened the harbour front and surrounding buildings.

Seismologists measured the event, which blew out windows at the city’s international airport nine kilometres (more than five miles) away, as the equivalent of a 3.3-magnitude earthquake.

Video stills show an intense blazing fireball rising above a line of massive storage silos, then a billowing cloud towering into the sky as a powerful shockwave rips through Lebanon’s biggest city.

Why such a big blast?

Lebanon’s Prime Minister Hassan Diab said 2,750 tonnes of ammonium nitrate, an agricultural fertiliser, stored in a portside warehouse had blown up, sparking “a disaster in every sense of the word”.

Ammonium nitrate is an odourless crystalline substance that has been the cause of numerous industrial explosions over the decades.

When combined with fuel oils, it creates a potent explosive widely used in the construction industry, but also by insurgent groups such as the Taliban for improvised explosive devices.

There has been no indication from Lebanese officials that the explosions were caused deliberately.

US President Donald Trump said late Tuesday that US generals had told him the explosions appeared to have been caused by a “bomb of some kind.”

“It looks like a terrible attack,” Trump said. But a Pentagon spokesman, when asked about the president’s remarks, told AFP that “we don’t have anything for you” and “you will have to reach out to the White House for clarification.”

Diab’s government described the circumstances at the port that led to the explosion as “unacceptable” and vowed to investigate.

The blasts killed more than 100 people and injured over 4,000, the Lebanese Red Cross said Wednesday, in the latest updated toll.

Search and rescue teams were still sifting through areas surrounding the port, it added, with rubble from flattened buildings spread across a wide area.

Injuries were recorded right across the city, with glass blown out of buildings in multiple districts.

Lebanon’s national defence council has declared Beirut a disaster zone and Diab has appealed to Lebanon’s allies to “stand by” the country and send aid.

But the country is in the middle of an enormous economic crisis and its hospitals are already overwhelmed by the coronavirus pandemic.

The US, France, Qatar, Iran and even Lebanon’s arch foe Israel have offered to send aid.