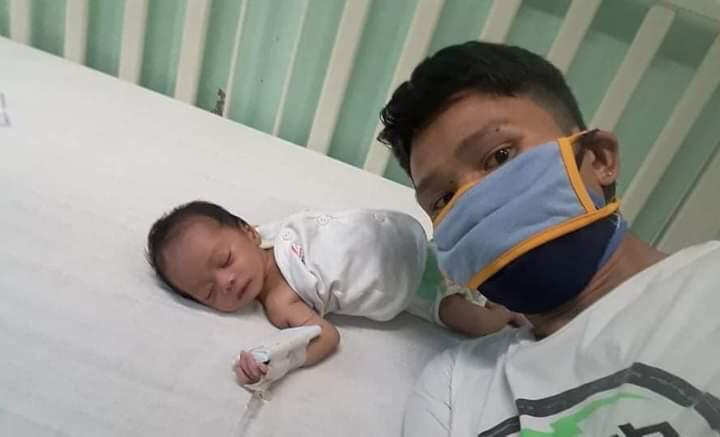 Ronnel Manjares takes a photo of him and his son Kobe, who was supposed to turn two-months old on June 12. Kobe died on Wednesday night, June 3, 2020, due to complications in his intestines. (Rosalyn Manjares)

TANAUAN, Batangas — He was heralded in the Philippines as the country’s youngest COVID-19 survivor, a baby who’d become infected with and conquered the coronavirus during his first 16 days of life.

To Ronnel Manjares and Trisha May Noche, he was Kobe Christ, their second child.

Noche wanted her son to grow up playing basketball, just like his father. The couple named him after American basketball legend Kobe Bryant, who died in a helicopter crash early this year.

“I added Christ after he was born on Easter Sunday,” Manjares said.

The young parents prepared for Kobe’s arrival during a challenging time.

Manjares, 26, lost his job as a daily wage construction worker in Metro Manila because of the nationwide coronavirus lockdown imposed in mid-March. They wanted Noche, 19, to give birth in their home province, but the lockdown prevented any travel.

The couple also was advised that it would be safer to have the baby at home instead of a hospital to prevent exposure to the virus. With the help of a traditional birth attendant, Kobe was born on April 12 in the shack near a construction area that his parents already shared with their baby daughter.

Manjares said the delivery went smoothly and that his newborn son “looked healthy and fit.” Noche was happy 15-month-old Crystal now had a brother.

“I want to take care of him, make him grow old properly, so my other child will have a playmate,” Noche recalled thinking.

The family spent Kobe’s first few days together at home. Then, the parents noticed his swollen belly. Their son also was constipated and running a fever. His father took Kobe to the main children’s hospital, where a virus test of the infant came back positive.

Neither Manjares nor the doctors could trace how or where the newborn contracted the coronavirus. Manjares, Noche, Crystal and the birth attendant all tested negative. 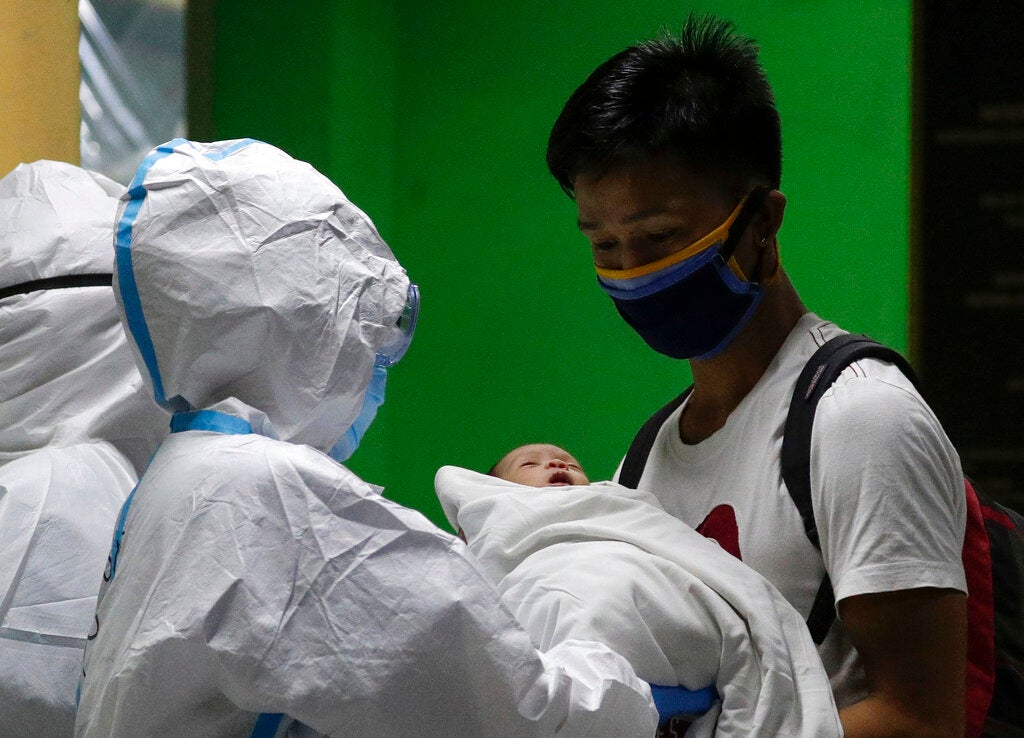 In this April 28, 2020, file photo, Ronnel Manjares, right, receives his 16-day-old baby Kobe who recovered from COVID-19 as they discharge him from the National Children’s Hospital in Quezon City. (AP)

But Kobe got better; he was declared virus-free based on another test when he was just over 2-weeks-old. His constipation and enlarged abdomen also cleared up.

The baby’s discharge from the National Children’s Hospital on April 28 made news. Video footage recorded that day shows Kobe in his father’s arms and surrounded by cheering health workers, some carrying signs reading “COVID-19 survivor” and “I Beat COVID-19.”

The two would need to spend 14 days in quarantine at another hospital, but a relieved Manjares already looked beyond the confinement period.

“I was very happy then because we were going home. My family will finally see my son, my youngest,” he recalled.

The family’s joy turned out to be short-lived. Three days later, Kobe was back at National Children’s Hospital with a swollen belly. His mother accompanied him this time so she could continue breastfeeding. Still quarantined himself, Manjares borrowed a neighbor’s cellphone for video calls with his son and partner during the month they remained at the hospital.

A biopsy showed that Kobe suffered from Hirschsprung disease, a rare birth defect that prevents stool from moving through the large intestine. It is usually treated with surgery, but the blockage can lead to a dangerous bacterial infection.

That’s what happened with Kobe. His doctors were working to manage the infection so the baby would be stable enough for surgery when Kobe’s condition rapidly deteriorated. The baby died on June 4, less than two months after he was born.

The director of the National Children’s Hospital told a local broadcaster the cause of death was sepsis, the overactive immune system response to an infection that can cause fatal tissue and organ damage.

It’s unclear if COVID-19 exacerbated the progression of the Hirschsprung disease or the complications the baby experienced. Data provided by the Philippines Department of Health showed that as of July 23, there have been 272 COVID-19 cases among infants, 12 of whom have died.

Lockdown restrictions prevented Manjares from going to the hospital to see his son’s body and comfort Kobe’s mother. Local officials allowed the couple to hold a two-day wake at their home with neighbors since Kobe’s death wasn’t attributed to COVID-19.

The baby died before he could be baptized, but a priest who came to celebrate Mass blessed the tiny remains in a white coffin.

A family friend who owns a farm in their home province south of Manila allowed them, as well as his father and siblings, to stay on his property because the Manjares home in nearby Talisay town was heavily damaged during the eruption of Taal volcano in January.

There, Manjares remembers the time he spent with Kobe by viewing some photos of the baby he keeps on his phone. One is a selfie he took with a sleeping Kobe. Another grabbed from a video call shows his son filling the main screen, Manjares smiling from a small second one in the corner.

Because of her Catholic faith, Noche believes that Kobe is in a better place. The pain of losing a child stays with his mother, who also treasures a few images to keep him in her memory.

“Life would have been happier if baby Kobe was still alive,” she said. “How I wished for him to be with us for a bit longer.” 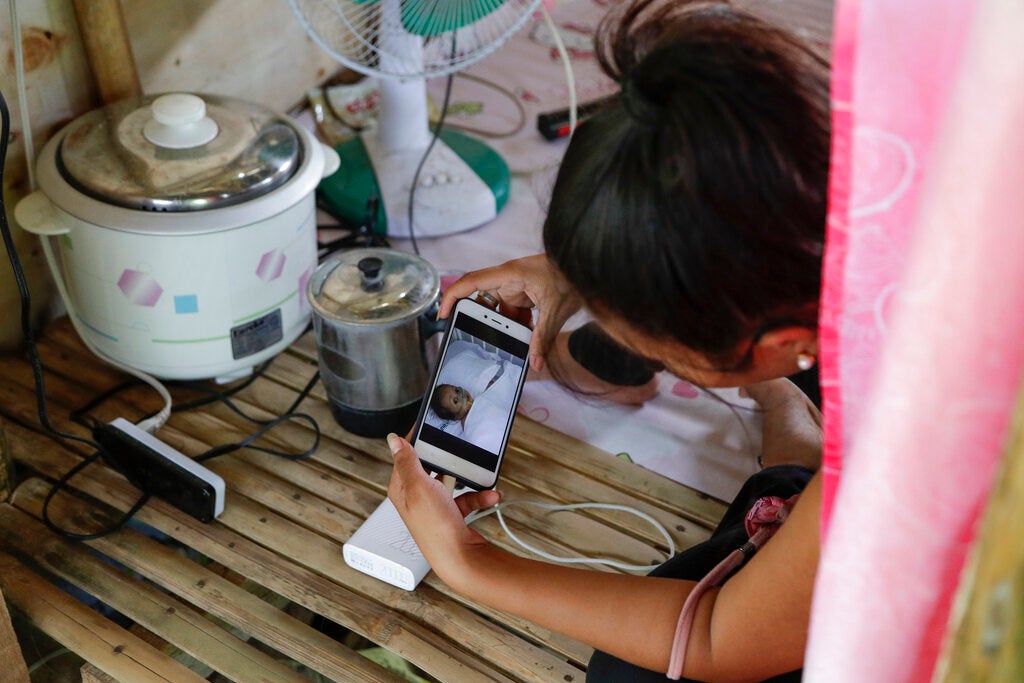 Read Next
Palace: Police personnel to be tapped as COVID-19 contact tracers
EDITORS' PICK
Complete your early Christmas shopping with vivo V25 Series
The vivo Y16 makes the season of giving more thoughtful for the whole family
DOH: No COVID surge despite strains, holidays
Drop in COVID alertness could create deadly new variant – WHO
South Korea reaches World Cup last 16 after late drama
House energy committee chair Arroyo bats for cheap electricity
MOST READ
ONE: Geje Eustaquio absorbs first round KO
Brandon Vera retires from MMA after loss at ONE 164
eTravel to replace One Health Pass, e-Arrival Card
World Cup Round of 16: qualified teams, schedule and how it works
Don't miss out on the latest news and information.