MARTIGUES, France — A forest fire Tuesday ravaged 800 hectares of vegetation near the southern French city of Marseille, forcing the evacuation of over 200 people, officials said. 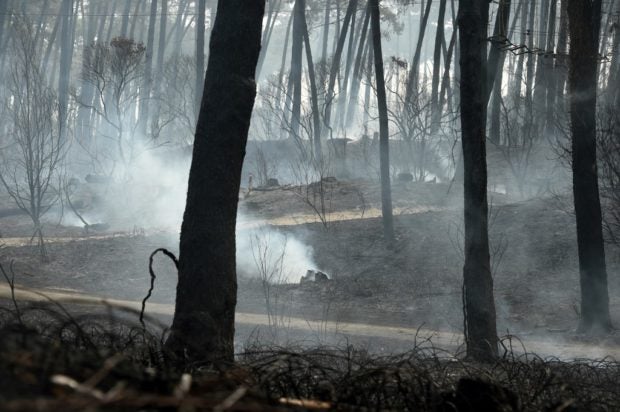 This picture shows burnt trees and greenery after a bushfire in the Chiberta forest in Anglet, southwestern France, on July 31, 2020. (Photo by GAIZKA IROZ / AFP)

There were no casualties thus far from the blaze that broke out west of Marseille, as 1,200 firefighters and water bombing planes were deployed to fight the flames.

Some 225 people, mostly tourists and campers, were evacuated by boat to a nearby fishing village and then taken by bus to makeshift shelters in the town of Martigues.

“We are braced for a difficult fight throughout the night,” said a spokesman for the firefighting service in the Bouches du Rhone department.

The fire broke out in the afternoon, sending out plumes of black smoke. It crossed eight kilometers in two hours, fanned by strong winds, the firefighting service said.

Seven water-dumping planes and a number of helicopters and other aircraft were deployed to back up 1,200 firefighters, officials said.

“We were in Martigues for shopping but now we cannot enter our home in La Couronne. All the roads have been cut off and the fire’s burning everywhere,” said Mylene Greffeuille.

“We’re very worried because my father is old and he is La Couronne,” near the fire, she said.

Part of a highway from Marseille to Martigues has been closed.