ILIGAN CITY—Fr. Teresito “Chito” Soganub left an indelible mark on two Marawi war survivors who recalled how the priest’s words kept them clinging to hope in their darkest hours during the war in 2017—God will not abandon you.

Roger Patendol, 43, who lost his left leg when a sniper shot him during his first attempt to escape, said there was only one line that he heard from the priest that he could not forget.

“He said, ‘we should not lose our hope and faith in God,’ (the only one) who could help us get out of that very difficult situation,” Patendol said during the birthday tribute to Soganub, who was buried on Monday (Aug. 3) in his hometown in Norala, South Cotabato province.

Pakigdait, a nongovernment group that the priest had been supporting 15 years before the war and which Soganub served as chair after the Marawi fighting, decided to hold the birthday tribute for Fr. Soganub, who died of cardiac arrest last July 22 in Norala.

Abel Moya, Pakigdait director, said the group had planned to attend the priest’s wake and burial on Monday but a lockdown in Norala prevented them from doing so.

“We were told that once we enter Norala, we will undergo the 14-day quarantine,” Moya said. “That would defeat our purpose of going there because we cannot attend his burial,” he said.

This prompted the group to hold a tribute to the priest on his birthday at Tabe’s Place in Palao village here.

Patendol, who left his fishing boat at the village of Buruun to attend the gathering of at least 50 people, said he met the priest only on June 4, 2017, two days after he was captured by terrorists in Marawi City.

“We did not have the chance to talk because we were forbidden to chat with fellow hostages. We had different assignments. But there was only one line that I could not forget from him. That made me think to hang on to God and never lose hope,” Patendol said. 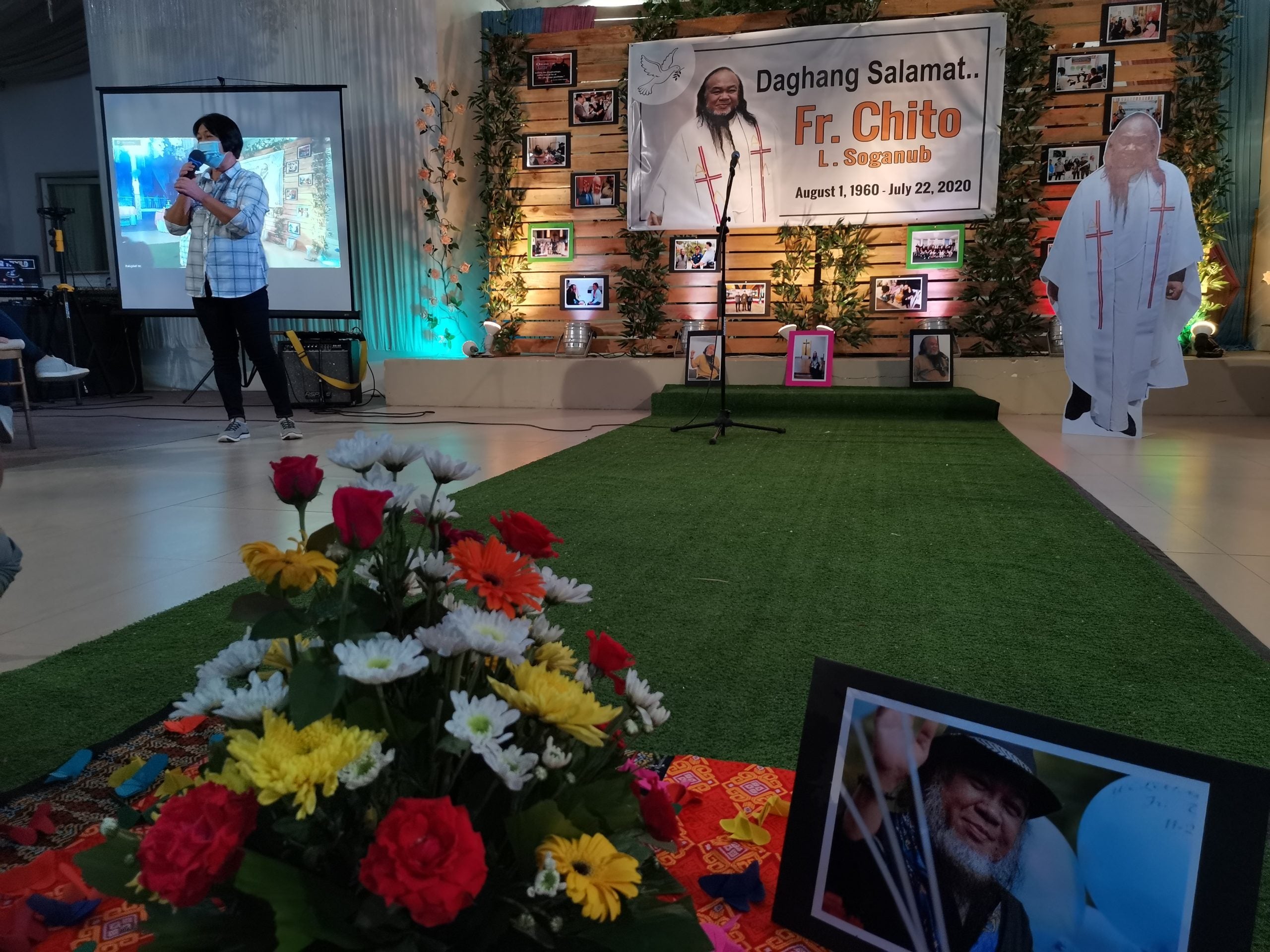 Noeleta Cosap, a teacher captured by armed men led by her former students, the Maute brothers, remembers Fr. Teresito “Chito” Soganub during the tribute and birthday celebration of the late priest on Saturday, August 1, in Iligan City. DIVINA M. SUSON

Noeleta Cosap also met Soganub only once and that was on the night of May 23 when they were captured.

“I had asked him, ‘Father, what do you think of this situation?’ and he answered, ‘We Christians and Muslims are praying to the same God,” said Cosap.

“His answer made me realize that he was a person possessed of kindness, humility and patience,” said Cosap, a former teacher of the Maute brothers who led the terror group that held them captive.

Hundreds of civilians were taken hostage by the IS-inspired terror group during the five-month war in Marawi City.

Some of them survived but many died during the airstrikes and exchanges of gunfire.

“I only have a few words for Fr. Chito: ‘My big salute to you, Father!’” said Patendol, who came to the gathering wearing his crutches and eager to share his remembrance of Soganub.

The priest, who was captured at the start of the war, recounted in previous interviews how he was assigned to help in making improvised explosive device (IED).

Patendol said he was assigned as cook for the terrorists. He said it was because of what the priest had said that he did not lose hope despite their situation.

“The last time I saw him was when I was coming out of the toilet and heard the planes coming. He emerged from the other side and when we heard (the sound), we knew they would be dropping bombs again. We only talked with our eyes and our eyes were saying, ‘Let’s hide!’” Patendol said.

Soganub escaped and was eventually rescued by the military on Sept. 17, 2017.

On Oct. 4 that year, Patendol and 17 other hostages tried to escape again and finally succeeded.

“Even if he’s gone, we will continue to keep alive his memories and legacy. It’s something that we will not forget,” Macapaar said. WITH A REPORT FROM RICHEL UMEL