President Rodrigo Duterte said he needed a vaccine against the coronavirus that caused the global COVID-19 pandemic before he could lay down the roadmap for the country’s recovery from the national health crisis.

He was reacting to criticisms that he did not spell out clear plans to deal with the pandemic in his State of the Nation Address on Monday.

“I could not have uttered a single sentence about roadmap to recovery because the medicine must come first,” the President said.

He spoke during his meeting with some members of the Inter-Agency Task Force for the Management of Emerging Infectious Diseases on Thursday, which was broadcast on government television on Friday morning.

Opposition Sen. Risa Hontiveros said Mr. Duterte “uttered the same incoherent statements that did not present a health and economic roadmap that could lead us through this pandemic.”

Renato Reyes, Bayan secretary general, said in a statement that the President’s response to the pandemic was “primarily to wait for a vaccine from China.”

Mr. Duterte promised a “normal” life for Filipinos as early as December but only if the government gets its hands on the vaccines.

He urged Filipinos to be more patient as the vaccines were on their way.

“I promise you, by the grace of God, I hope by December, we would be back to normal. Not the new normal, new normal. I said even at the beginning, let’s just wait for the vaccine,” he said.

Finance Secretary Carlos Dominguez III said the Philippines could fully reopen the economy and “start the normal life” once a vaccine became available.

“The economy actually is already beginning to recover. Our estimate is that we hit already the lowest part of the economy in April, or May,” he told the President. “Actually, it’s already starting to pick up already now.” 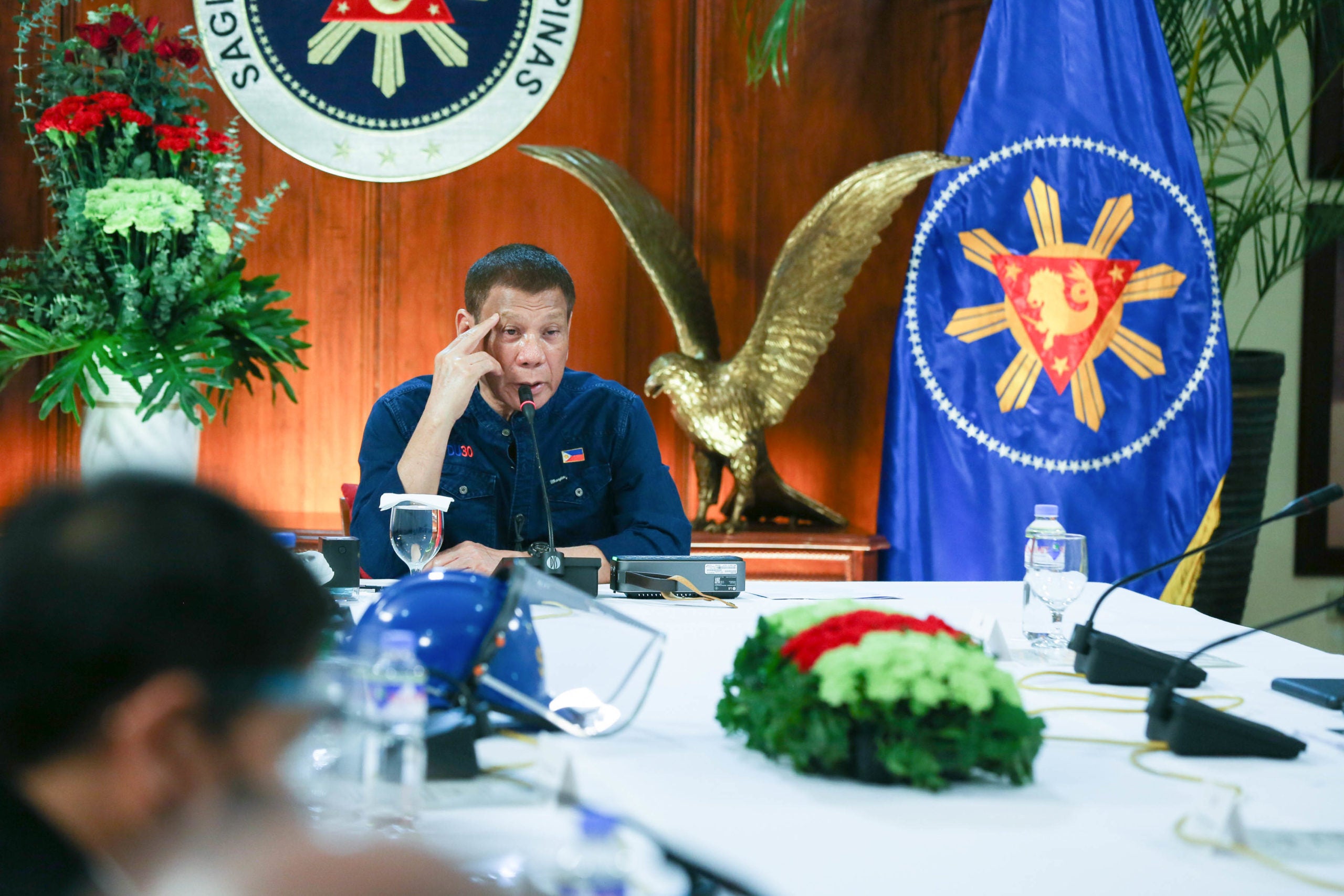 WHO: No cutting corners

The World Health Organization (WHO) last week dampened hopes for a vaccine within the next few months.

“We’re speeding up as much as possible but we’re not in any way going to cut corners on safety,” WHO health emergencies program executive director Mike Ryan said. “We can shorten that time but realistically it’s going to be the first part of next year before we start seeing people getting vaccinated.”

But Mr. Duterte said there were potential vaccines being made by pharmaceutical companies in other countries particularly China.

“The good thing is, to our credit, we have remained friendly with China … They promised that we will be a priority,” he said.

He already had a list of who should receive the vaccines for free.

The top priority will be the poorest Filipinos, referring to those who received financial aid from the government during the lockdown.

“The first will be the have-nots and of course, those in the hospitals, the sick or dying,” Mr. Duterte said.

They will be followed by “my military and my police because I need a strong backbone,” the President said. “The backbone of my administration is the uniformed personnel of government.”

He also offered the prospective vaccines to communist rebels “as a matter of humanity … and because they are also Filipinos.”

The Filipino Nurses United (FNU) pointed out that while they have nothing against the government providing the vaccine to the poorest Filipinos, it should’ve been top of the President’s mind to vaccinate medical frontliners first given the risk that they are exposed to.

“Once our frontline health workers fall ill, that will be a big problem for our countrymen,” FNU president Maristela Abenojar said in a phone interview.

Dr. Josh San Pedro, coconvener of the Coalition for People’s Right to Health, said the distribution of the vaccines should be based on one’s risk, not on who is favored by the government.

He also said the government shouldn’t rely heavily on vaccine being available soon as it would not only give “false hopes” but may also lull the public into complacency.

“A true solution to this public health problem goes beyond a vaccine—requiring attention to nutrition, access to nutrition, housing, and a free, quality and comprehensive healthcare system,” he said.

Sentro secretary general Josua Mata said it was “disgusting” that Mr. Duterte “would pander to the military and the police by ensuring that they get special mention as among those to be prioritized.”

Dominguez said the DOH had estimated that at least 20 million of the poorest Filipinos needed to be vaccinated for free.

If two shots were required, and at a cost of about $10 per dose, this would total $400 million or about P20 billion, Dominguez said. He did not say where he got the vaccine price estimate.

The vaccines will be sold to the DOH, which will pay PITC over time with its budget allocations, Dominguez said.

He said both LBP and DBP were in a good financial position to support the estimated loan requirements because the government hardly collected any dividends from them since 2016, strengthening their capital bases.

Speaking at the Laging Handa Briefing on Friday, Trade Secretary and PITC chair Ramon Lopez said the private sector could also ask PITC to buy the vaccines for them to get volume discounts.

“What the government is only saying here is that the poorest of the poor will be prioritized first. Nobody is preventing anyone from importing also the vaccine, and if they want us to buy [in huge volumes], they could course it through PITC,” he said.

PITC President and CEO Dave Almarinez said they were ready “to deliver the much needed vaccines in this great hour of need of our country today.”

Lopez told reporters in a Viber message that there were still no details regarding the brands, quantities and price.

Sen. Nancy Binay on Friday urged the government to take “the right approach to public safety and provide the highest degree of prudence” in acquiring the vaccines, recalling the Dengvaxia fiasco.

Sen. Francis Pangilinan said President Duterte’s plan to stem the contagion would be futile as long as Health Secretary Francisco Duque III remains at his post.

“(The President’s) proposals to address (the pandemic) ring hollow and empty when he condones incompetence and corruption, and when his team continues to miss their targets for mass testing and contact tracing,” Pangilinan said. —WITH REPORTS FROM JOVIC YEE, MARLON RAMOS, ROY STEPHEN C. CANIVEL AND BEN O. DE VERA

Read Next
Zamboanga sees spike in COVID-19 cases
EDITORS' PICK
Water remains our saving grace right now
Been there, done that but what’s the difference between MECQ and GCQ?
Smart 5G goes live
PNP: Checkpoints back in MECQ areas
A gem of a residence in the new normal
BREAKING: 3,226 latest COVID-19 cases bring PH’s total to 106,330
MOST READ
MECQ guidelines in infographics
Lacson takes up cudgels for health workers ‘threatened’ by Duterte
You’re my ‘idol’ in crafting laws, neophyte senator ‘Bato’ tells Drilon
Education advocate promotes ‘unschooling’ of children
Don't miss out on the latest news and information.