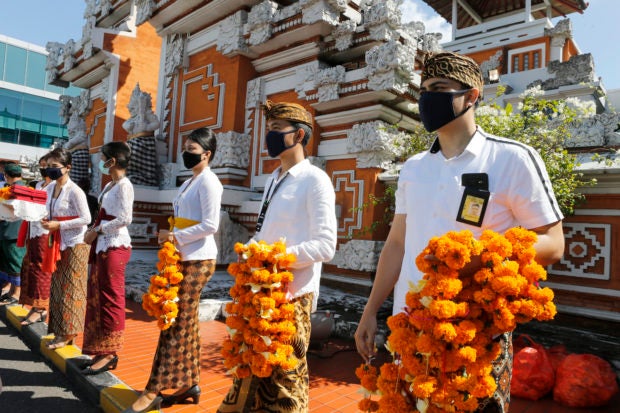 Airport officers wearing face masks line up as they hold flowers to welcome passengers at Bali airport, Indonesia on Friday, July 31, 2020. Indonesia’s resort island of Bali reopened for domestic tourists after months of lockdown due to a new coronavirus. (AP Photo/Firdia Lisnawati)

CANBERRA, Australia  — Tourism operators across Asia and the Pacific are making furtive and faltering advances, as well as some spectacular missteps after travel was largely halted by the coronavirus pandemic that continues ebbing and mostly surging around the globe.

With international travel heavily restricted, progress in reviving tourism has been at best anemic and usually perilous.

The perils became evident in Vietnam’s popular beach destination of Da Nang, where an outbreak that began with one person last week has swelled to nearly 100 cases. Da Nang’s beaches, which host some 50,000 tourists daily during the high season, were emptied when the city was locked down Tuesday.

Queensland state, which is believed to be free of community transmission of the virus, has been allowing in all interstate travelers except those from coronavirus hot spot Victoria state.

While businesses lost visitors from Melbourne, Australia’s second-largest city, at least they could look forward to Sydney residents escaping the Southern Hemisphere’s winter for a tropical Great Barrier Reef vacation. 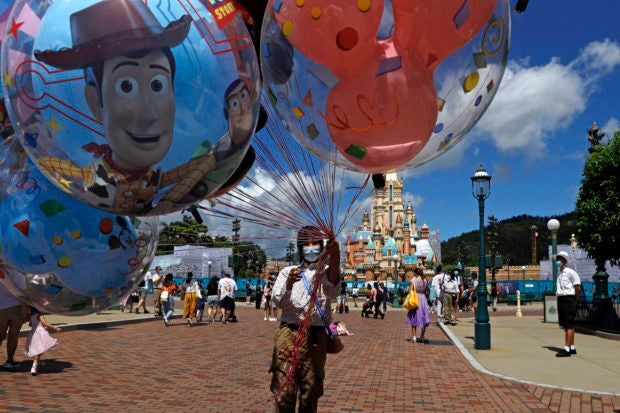 An employee wearing a face mask to prevent the spread of the new coronavirus, sells balloons at the Hong Kong Disneyland Thursday, June 18, 2020. In March, Hong Kong closed its borders to overseas countries, restricting visitors to those who have spent more than 14 days in mainland China, Macao, and Taiwan. Tourist numbers plunged nearly 90%, with only about 3.5 million visitors arriving in the city between January and June this year. The city’s airlines, hospitality and tourist industries – which had already taken a hit from months of anti-government protests last year – took a second beating, with the government pledging $51.6 million in subsidies to help them stay afloat. (AP Photo/Kin Cheung)

But a growing Sydney outbreak led the Queensland government to reconsider and Sydney visitors will now be banned from Saturday.

“With this pandemic, the situation becomes fluid and therefore evolves weekly,” Kapernick said. “A week ago, we didn’t think we’d be facing a border closed to Sydney.”

Like Australia, Hong Kong effectively closed its borders in March, driving down tourist numbers by 90%. At first, Hong Kong seemed successful in dealing with the pandemic, helped by residents’ fastidious mask-wearing and restrictions on public gatherings and restaurants.

The city had weeks with zero local transmissions in May and June, and the government relaxed the rules. Hotels offered “staycation” packages and theme parks reopened.

The tourism industry was again plunged into crisis, though, by Hong Kong’s worst outbreak in July, with hundreds of new, locally transmitted cases.

Japan’s outbreaks have spread across the country with increasing travel during the summer holidays.

In recent days, the number of newly confirmed infections nationwide has topped 1,000 and the number of deaths recently also surpassed 1,000, with more than 31,000 confirmed cases so far.

Critics have faulted Prime Minister Shinzo Abe’s administration for its “GoTo” campaign, offering discounts and other incentives for domestic tourism, even though the campaign excluded Tokyo, a hot spot with surging infections.

Thailand, like Vietnam, has been among the success stories of the pandemic. It has counted around 3,300 cases, with all of them in recent weeks among Thai soldiers, workers, and students returning from abroad. But the U.N. Conference on Trade and Development recently cited the Southeast Asian travel hub as one of the countries expected to lose the greatest percentage of its GDP due to the pandemic and tourism restrictions. 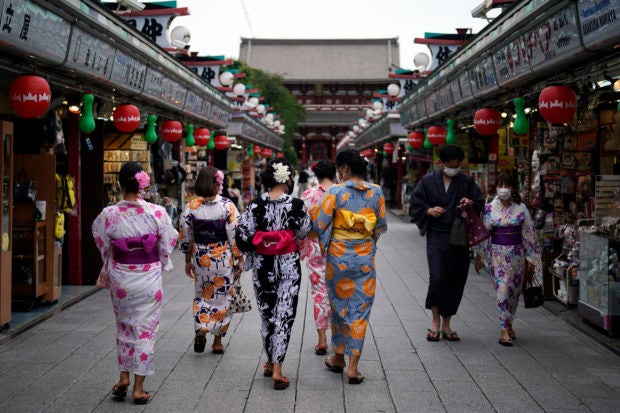 In this July 27, 2020, file photo, tourists in traditional Japanese kimonos walk in Asakusa district in Tokyo. Tourism operators across Asia and the Pacific are making furtive and faltering steps forward as well as some spectacular backward steps from the setback of the coronavirus pandemic that continues to ebb and surge across the globe. In Japan, new coronavirus outbreaks spread across the country with increasing travel during the summer holidays. (AP Photo/Eugene Hoshiko)

Thailand’s Cabinet this week approved three projects together worth more than $700 million to help the tourism industry, which normally accounts for more than 10% of GPD.

Bali’s reopening to domestic tourism after an almost four-month lockdown is a step toward overseas arrivals resuming in September.

Normally bustling beaches and streets on the idyllic island were emptied in late March. Authorities restricted public activities, closed the airport, and shuttered all shops, bars, restaurants, and tourist attractions. Limits were eased beginning three weeks ago, and visitors will face stringent rules in hotels, restaurants, and beaches.

The island that’s home to more than 4 million people, attracted more than 6 million tourists from abroad and 10 million from Indonesia last year, according to government data.

According to Indonesia’s Coordinating Maritime Affairs and Investment Minister, Luhut Pandjaitan, the tourism sector has lost an estimated $500 million due to the coronavirus outbreak.

The government will waive taxes for hoteliers and restaurants in 10 promoted destinations for the next six months. Local governments will be compensated by the central government for the loss of taxes, which is estimated to total $230 million.

In Australia, Kapernick said keeping Queensland COVID-19-free was more important to the struggling tourism industry than letting in more holidaymakers.

“What will send businesses to the wall quicker is if we don’t control these outbreaks that are happening now and we find ourselves in a situation like (hot spot state) Victoria,” Kapernick said.