SWS: 55% of Filipinos comfortable in going to work in case quarantine ends 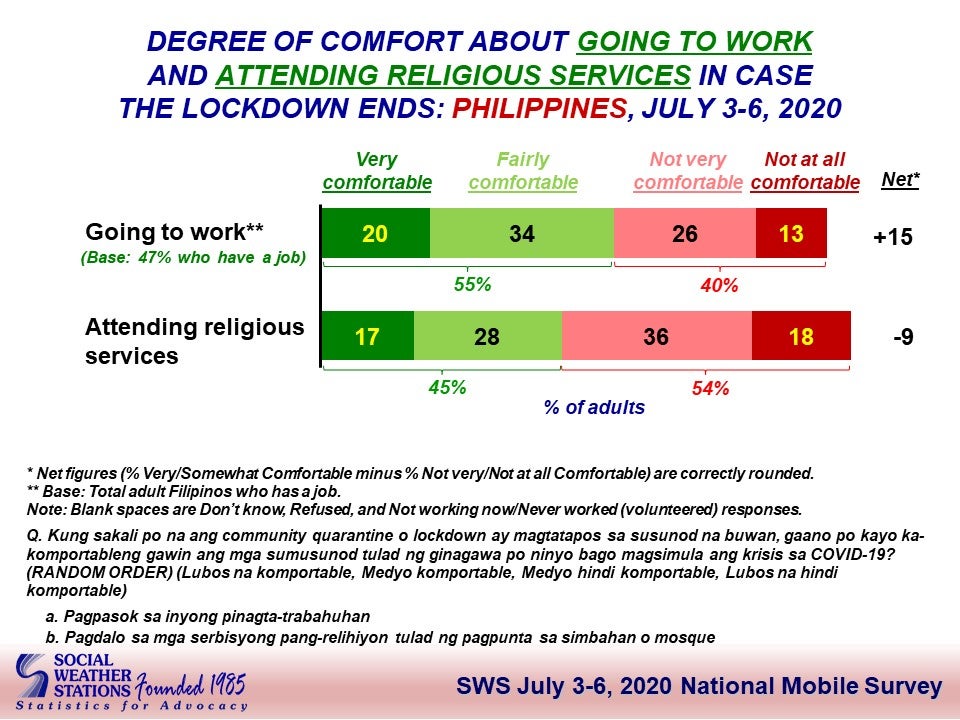 MANILA, Philippines — Fifty-five percent of Filipinos expressed that they would feel comfortable in going to work in case the community quarantine has been put to an end next month, the latest Social Weather Stations (SWS) survey released on Friday showed.

The survey, which was conducted from July 3 to 6, asked 1,555 Filipinos nationwide if they would feel comfortable in going to work should the government decide to end the community quarantine restrictions all over the country.

Meanwhile, 40 percent of respondents said that they felt uncomfortable of traveling to work in case community quarantine ends.

Respondents from Mindanao were found most comfortable if lockdown will end, with 64 percent; followed by Balanced Luzon with 55 percent; Visayas at 50 percent; and, Metro Manila at 45 percent.

In the same survey, it also found that 54 percent of respondents said that they would feel uncomfortable about attending religious services, such as going to church or a mosque, should community quarantine ends.

The remaining 45 percent of respondents, however, said they felt comfortable about attending such services.

The net figure for the total responses was at -9, where all figures were correctly rounded, according to SWS.

Those who answered “don’t know” or “refused” were not shown included in the responses, SWS added.

The Inter-agency Task Force (IATF) for the Management of Emerging Infectious Diseases previously relaxed restrictions on religious activities under general community quarantine (GCQ) areas, as venues, will now be allowed 10 percent of its capacity.

President Rodrigo Duterte earlier announced that GCQ will remain in Metro Manila, Cebu and other areas until Aug. 15, even as the country’s COVID-19 cases continue to surge.