QUITO, Ecuador  — Some call it a floating city, a flotilla of 260 mostly Chinese fishing vessels near the Galapagos archipelago that is stirring diplomatic tension and raising worries about the threat to sharks, manta rays and other vulnerable species in waters around the UNESCO world heritage site. 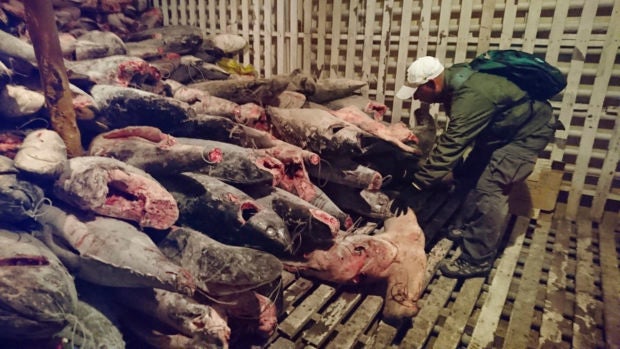 FILE – In this Aug. 13, 2017 handout file photo provided by Galapagos National Park, a park ranger takes part in the inspection of a Chinese flagship where 300 tons of marine species, several of them in danger of extinction, were found, in Galapagos Islands, Ecuador, as the ship and its crew are detained. In July 2020, a congregation of about 260 mostly Chinese fishing vessels near the Galápagos archipelago is stirring diplomatic tension and raising concerns about the threat to sharks, manta rays, and other vulnerable species in waters around the UNESCO world heritage site. (Galapagos National Park via AP, File)

Yet the vast fleet is in international waters, outside a maritime border around the Galapagos and also outside coastal waters off Ecuador, which controls the archipelago. 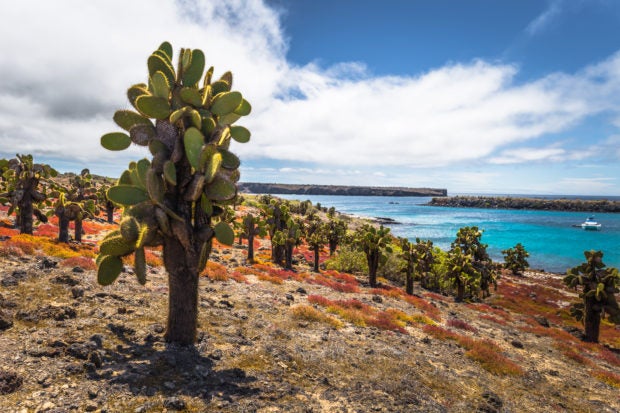 That means the fleet, one of the biggest seen in years off South America’s Pacific coast, is likely to fish with minimal monitoring until its holds are full.

The Chinese fleet is “very close” to the edge of the exclusive economic zone around the Galapagos, which extends 200 nautical miles (370 kilometers) from the archipelago, said its governor, Norman Wray. He said that, because of overfishing in recent years, “what we’re seeing is that each time fewer species return to the Galapagos.”

Luis Villanueva, an officer with the Pew Bertarelli Ocean Legacy Project, said Thursday that it was possible, though unproven, that long fishing lines from the Chinese vessels could be drifting into the exclusive economic zone. The fleet is a huge logistical undertaking, with storage and supply vessels that allow it to stay at sea for long periods.

The fleet has drawn the attention of the United States, whose relationship with China is fraught on many fronts. The U.S. National Security Council tweeted that the U.S. stands with Ecuador “against any aggression directed toward their economic and environmental sovereignty.”

China maintains that it is a “responsible fishing nation” with a “zero tolerance” policy toward illegal fishing. The Chinese Embassy in Quito said in a July 23 statement that China respects Ecuador’s measures to protect the environment and preserve marine resources.

China had ascertained and confirmed with Ecuador’s navy that all the Chinese fishing vessels are operating legally “and don’t represent any threat for anyone,” the embassy said.

Despite the Chinese statement, Ecuador has expressed concern through diplomatic channels and its navy is on alert for any incursion into Ecuadorian waters. In 2017, 20 crew members of a Chinese boat were jailed after Ecuador seized the vessel in the marine reserve of the Galapagos and discovered large numbers of sharks on board.

China’s “distant-water” fishing fleet is the biggest in the world and comprises a total of about 17,000 vessels, with about 1,000 of those registered in other countries, according to a June report by ODI, a London-based research group.

The fleet’s “vessel ownership is highly fragmented among many small companies” and it is unclear whether the Chinese government has a clear picture of its complex control structure, the report said. It said other countries are involved in the world’s overfishing crisis but that China is the most significant factor.

The U.N. Food and Agriculture Organization said in June that about one-third of fish stocks are being fished at “biologically unsustainable levels.”
Luis Suárez, vice president and executive director of Conservation International in Ecuador, said there are suspicions, so far unconfirmed, that the Chinese fleet is being aided by South American associates because it is so far from home. For example, they could be selling it fuel, he said.

Villanueva said fishing pressure around the Galapagos will only increase as climate change warms oceans and creates a more abundant catch around the archipelago in comparison to other regions.

“More and more fleets will be interested in that area,” he said.