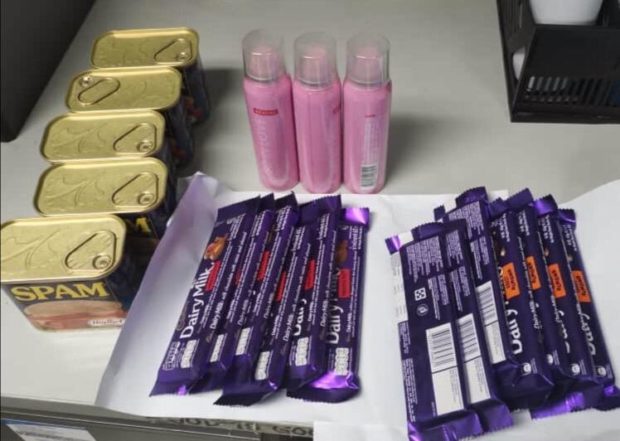 Five cans of Spam, 13 packs of chocolate bars, and three bottles of body spray were recovered from a 60-year-old woman who was allegedly caught shoplifting in a convenience store in Barangay Bel-Air, Makati City on Wednesday, July 29, 2020. Photo courtesy of the Southern Police District

MANILA, Philippines — A 60-year-old woman was arrested for alleged shoplifting of several pieces of canned meat, chocolates and body spray in a convenience store in Barangay Bel-Air, Makati City.

The suspect was brought by an arresting officer and the branch manager of the convenience store to Substation 6 of the Makati City Police at about 4:20 p.m. on Wednesday for allegedly stealing five tin cans of meat, 13 packs of chocolates, and three bottles of body spray, totaling P2,577.

According to police, the branch manager saw the suspect at a closed-circuit television camera taking the items and placing them inside her bag.

An employee of the convenience store then chased the suspect.

“Thereafter, suspect immediately went out of the store without paying to the cashier, prompted the arresting officer chased the latter, hence her arrest and recovered in her possession the above-cited loot items,” read the police report.

The woman was then brought to Palanan Health Center for medical examination and turned over to the Station Investigation and Detective Management Section at about 11 p.m. on the same day for the filing of appropriate charges.