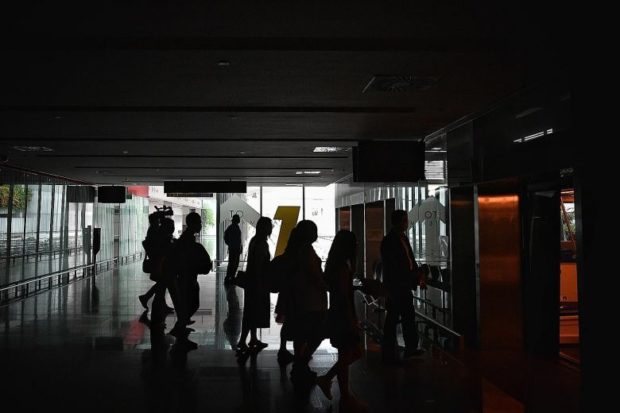 People boarding a skytrain at Changi Airport on July 1. Singapore recorded a total of 688 imported cases as of Tuesday. ST PHOTO: ARIFFIN JAMAR

SINGAPORE — Singapore is now seeing a third wave of imported Covid-19 cases, with more than 100 such cases confirmed in the past month.

These make up about 15.5 per cent of the total number of imported cases here since the start of the outbreak in January.

As of Tuesday, a total of 688 imported cases of Covid-19 had been confirmed in Singapore.

The number of daily imported cases had earlier dropped to zero as travel restrictions tightened here and around the world.

But on June 15, the multi-ministry task force tackling Covid-19 here announced that more long-term pass holders would be able to return to Singapore during phase two of the country’s reopening, which began on June 19.

On June 30, the Republic saw its first imported case in more than two weeks.

Another 106 cases followed up until Tuesday, and they were imported from nine different countries, with more than half – 62 cases – coming from India.

India has seen a rapid rise in Covid-19 infections, with more than 1.5 million confirmed cases, and nearly 35,000 fatalities.

Another 23 cases were imported from the Philippines, which also saw a recent coronavirus surge, while the rest came from countries such as Indonesia, Pakistan and the United States.

Most of the imported cases – 27 – are work pass holders, while 23 of them are Singaporeans.

There were 20 permanent residents and 19 dependant’s pass holders among the imported cases.

The increase in cases has prompted some Straits Times readers to ask why travelers entering Singapore are not tested for Covid-19 upon arrival.

Currently, travelers have to get approval before entering Singapore, serve a 14-day stay-home notice (SHN) upon arrival, and are swabbed for the coronavirus a few days before their SHN period ends.

They should travel from their place of residence to the designated testing facility, and return immediately after the test, using a private vehicle. They are also advised to avoid taking public transport.

Some experts had earlier said people who are infected may not test positive during the early stages of their illness due to a low viral load.

Associate Professor Alex Cook, vice-dean of research at the National University of Singapore’s Saw Swee Hock School of Public Health, suggested yesterday that countries such as Singapore may consider swabbing travelers on arrival instead of quarantining them.

He told The Straits Times: “This would still help filter out the majority of infected travelers, save money and inconvenience related to quarantine, and could potentially lower the risk of spread to the general population, since those testing positive could then be isolated at hospital or a facility.”

However, he added that quarantine is an effective way of combating the spread caused by imported cases. He noted that Singapore went through two waves of imported cases before the current one – an initial wave of cases from Wuhan, and a larger one in March from areas like Europe and countries like the US that preceded a wave of community cases which led to the circuit breaker.

“The lesson we learnt from that second wave was that it is vital to ensure that infected cases are quarantined in a way that minimizes the risk of spillover. As long as we continue to keep new arrivals separated from the community, then it’s not a concern,” he said, adding that any home-based quarantine regime would need to be rigorously enforced.

Read Next
Flood engulfs over a third of Bangladesh
EDITORS' PICK
PH logs 665 new COVID-19 cases, lowest since July 2020
A delightful blessing!
Gov’t eyeing COVID-19 vaccine booster for essential workers, indigents by Dec. 10
Legarda: Ending Violence Against Women, a cause for all
Omicron poses ‘very high’ global risk, countries must prepare–WHO
Villar Group gears up for AllValue Shopping Party on Dec. 3; around P 1-million promos and discounts up for grabs
MOST READ
Quiboloy warns of ‘much worse than Omicron virus’ if his ‘persecution’ is not stopped
IATF tightens border control, suspends entry of fully vaxxed travelers from ‘green’ countries
Bongbong Marcos’ conviction in tax case not a crime involving moral turpitude — lawyer
Omicron poses ‘very high’ global risk, countries must prepare–WHO
Don't miss out on the latest news and information.