Flood engulfs over a third of Bangladesh 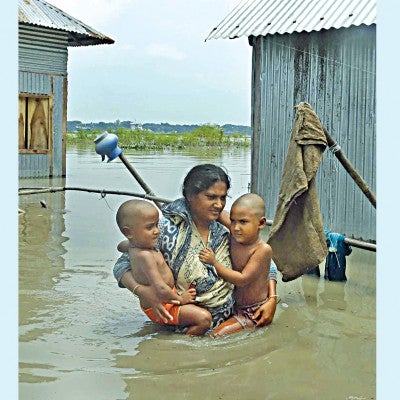 A woman trying to walk in her flooded front yard holding her two babies in Jhautia area of Munshiganj yesterday. She could save very little of her belongings from being soaked as the Padma swelled and inundated vast areas along its banks. Officials said over 5 million people across the country have been directly affected by the floods. Photo: Amran Hossain

People of low-lying areas are the worst affected victims of this natural disaster. Some of them have been waterlogged for over a month, he told The Daily Star yesterday.

Over 50 lakh people of 150 upazilas in 31 districts have been affected by the flood, said the latest report of National Disaster Response Coordination Centre.

Meanwhile, the flood situation may deteriorate further in the northern region as well as in the low-lying areas around the capital.

The state of some low-lying areas around the capital may slightly deteriorate today, said yesterday’s bulletin of Flood Forecasting and Warning Centre (FFWC).

Water level of the rivers around the capital may rise today, while that of the Teesta and Dharala in the northern region may increase till tomorrow.

Seventeen rivers were flowing up to the danger marks yesterday, said the bulletin.

Our district correspondents report on the flood situation.

In Tangail, fresh areas have been flooded after a 30-meter portion of a flood protection dam collapsed at Naogaon in Sadar upazila yesterday.

“The embankment was in a bad state. We tried to protect it by dumping geobags for the last couple of days. But it finally collapsed, said Sirajul Islam, executive engineer of Water Development Board (WDB) in Tangail.

Although water has started receding from some areas, the flood situation still remains unchanged.

Around 5.41 lakh people were affected in 11 out of the district’s 12 upazilas. Some 750 villages, 89 unions, and six municipalities were hit by the flood.

Three flash floods ravaged houses, farmland, and roads of low-lying areas of all upazilas and four municipalities in Sunamganj.

The Surma and Jadukata rivers have been flowing below the danger level for the last couple of days. But the river water started increasing from early yesterday.

Such triple strikes by flash floods in a month is a new experience for many people of the district — even the elderly could not recall such a situation.

Wahid Miah, another elderly man of Sonapur village of the upazila, echoed similar views and said when the water would recede completely, it could be realised how destructive the floods were.

Meanwhile, road communications remain suspended between Chhatak and Dowarabazar upazilas, Jamalganj and Tahirpur with Bishwambarpur upazilas, and Nabinagar and Dharargaon with Sadar upazila for around a month.

Over 900km of roads were washed away in the district.

In Sirajganj, water level of the Jamuna is slowly coming down. But many people are still waterlogged as the river was flowing above the danger mark.

About 3.38 lakh people have been affected in the district, according to the district relief and rehabilitation office.