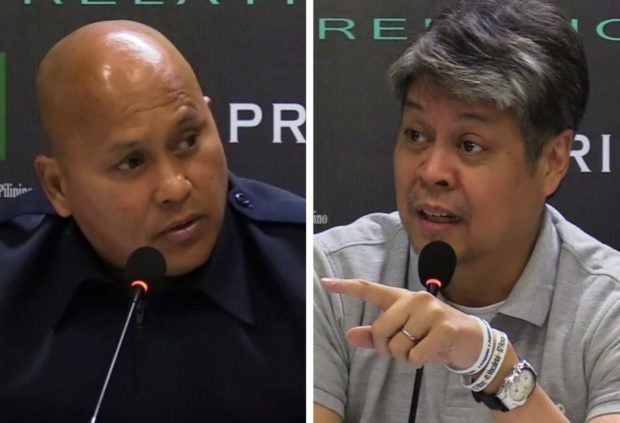 MANLA, Philippines — Sen. Ronald “Bato” dela Rosa insisted at a Senate plenary session on Wednesday that the administration’s anti-illegal drugs campaign had been “very effective” after Sen. Francis Pangilinan questioned the “logic” behind its supposed success when billions of pesos worth of illegal drugs continued to enter the country.

Dela Rosa made the assertion as he urged his fellow senators to begin deliberations on the death penalty bills after President Rodrigo Duterte renewed his call to Congress to approve the return of capital punishment for drug-related crimes.

Earlier in the session, Pangilinan asked Dela Rosa,  a former chief of the Philippine National Police, whether the need to revive the death penalty for drug-related crimes was due to the continuous flow of illegal drugs in the country.

Dela Rosa agreed, saying in Filipino: “Drug trafficking continues even during this pandemic. If we didn’t have this problem of drug trafficking, I will not author this bill, to tell you frankly — because I myself don’t want death. I want all of us to be alive. Nobody should die.”

Noting Dela Rosa’s answer, Pangilinan further asked the neophyte senator if this would mean that the administration’s “Oplan Tokhang” had been “ineffective” in stopping the flow of drugs in the country.

The question piqued Dela Rosa, who told Pangilinan: “Your saying it’s ineffective is very subjective. I will not yield to your opinion that it was ineffective. I will say that it’s very effective. Where else can you see a government program that achieved 1.3 million surrenderers who are drug users and drug pushers?”

The reason why the death penalty needs to be revived,  according to Dela Rosa, is to go after drug lords, most of whom continue to do their business behind bars.

“Drugs continue to enter the country because they’re very lucrative. The return of investment in this drug business is very high. That’s why these drug lords won’t stop their business until the death penalty is returned,” he said.

“Even when they’re detained at the [New] Bilibid [Prison], their drug business continues — because they’re still alive. If they had been executed long ago, this problem of drugs would have been gone away.”

Pangilinan remained skeptical, however, about the supposed success of the campaign.

“We beg to disagree that, even with millions have been imprisoned or have surrendered — but with drugs still in abundance — that it means [the campaign] was successful,” he said.

“I don’t see any logic in the fact that, despite so many who have been arrested and thousands who have died, drugs continue to proliferate,” he added.

Meanwhile, Dela Rosa was elected as a member of the Senate justice committee, which will be tasked with conducting hearings on several pending bills seeking the death penalty revival.

Before this, Dela Rosa expressed his intent to lead sub-committee hearings should the panel chair, Sen. Richard Gordon, who has long opposed the death penalty, opt not to head the hearings.

Under the rules of the Senate, only members of a committee are allowed to participate in hearings on bills referred to the panel.

Sen. Sherwin Gatchalian, a member of the committee, then yielded his membership to Dela Rosa after he sensed the latter’s “candor and determination” on the matter.

“I am yielding my membership in the justice committee to Senator Dela Rosa so he can participate in the deliberation,” Gatchalian said.

Gordon, meanwhile, said he would “objectively” preside over the hearings. But he maintained that he would not sponsor the measure once it reached the Senate floor.

“But…I will not sponsor it because I don’t believe in it. Let Senator Bato or Senator [Manny] Pacquiao do the sponsorship,” he added.

Capital punishment was abolished in 2016 under then-President Gloria Macapagal Arroyo.

In the 17th Congress, the House of Representatives gave its nod to House Bill No. 4727 seeking to reimpose capital punishment for heinous and drug-related offenses, but it did not prosper in the Senate.

Currently, there are several bills seeking the revival of the death penalty filed at the Senate. All are still pending at the committee level.

Other senators have earlier expressed opposition to the return of the death penalty without needed reforms in the country’s justice system.