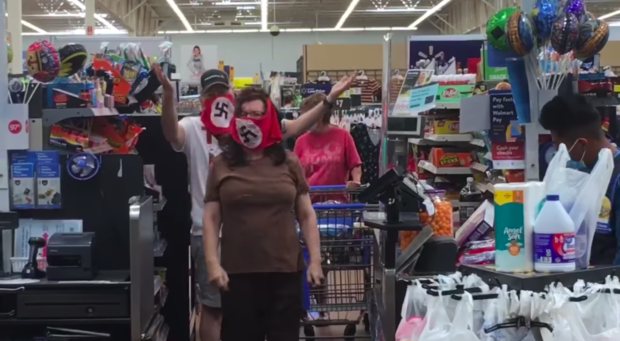 A couple was banned from a grocery store in Minnesota, USA, after they wore face masks designed with swastikas while shopping.

Raphaela Mueller, one of the customers at the store, posted a video of the man and the woman on her Facebook page last Sunday, July 26. The clip shows the couple paying for their groceries at the cashier as Mueller and her companion, Benjamin Ruesch, scold them for wearing the masks.

“You’re sick. You have an illness,” Ruesch tells the woman. “You can’t be American and wear that mask. You cannot. We literally had a war about this.”

Edit, since this is going much further than I thought it would (and the trolls and haters are starting to roll in): I was born and raised in Germany, and I grew up hearing about my great-grandmother who fought in the underground against the first wave of Nazis in the 1930s and 40s. Let me make this abundantly clear once and for all – THE SWASTIKA IS A HATE SYMBOL AND YOU DO NOT FLY THE FLAG, YOU DO NOT WEAR THE SYMBOL ANYWHERE ON YOUR BODY, YOU DO NOT USE OR DEFEND THIS SYMBOL, EVER. END OF STORY.

“I’m not a Nazi. I’m trying to show you what’s going to happen in America. If you vote for [Joe] Biden you’re gonna be in Nazi Germany,” the unidentified woman explained. “That’s what it’s going to like.”

She added that if Ruesch and Mueller vote for Biden, the US would adopt socialism. The woman then walks away as her male companion continues to pay for their groceries.

Mueller later explained on her Facebook page that she was born and raised in Germany. She noted that growing up, she would hear about her great-grandmother “who fought in the underground against the first wave of Nazis in the 1930s and 40s.” Mueller then stressed that the swastika is a hate symbol that one should not “use or defend.”

Following the verbal argument, the couple was offered disposable face masks, as per BuzzFeed News on July 26. However, they refused and continued to wear their Nazi coverings.

Store managers eventually asked the pair to leave. The two then became hostile upon the request, which led employees to contact authorities.

After the police arrived, the couple were both issued trespass notices and banned from the Walmart store and other branches in the country for at least a year.

“What happened at our store in Marshall, Minnesota, is unacceptable,” Walmart spokesperson Delia Garcia said in a statement to the publication. “We strive to provide a safe and comfortable shopping environment for all our customers and will not tolerate any form of discrimination or harassment in any aspect of our business.”

Meanwhile, Ruesch urged his fellow Americans to confront others who wear hate symbols on their masks.

“Don’t be silent. Think of those who cannot or will not speak,” he said in the report. “Be the kind of person to say this is wrong.” Ryan Arcadio /ra

Barista gets over $74,000 in tips after woman without face mask shames him for not serving her

‘It shouldn’t be a debate’: Jennifer Aniston urges fans to wear face masks amid COVID-19