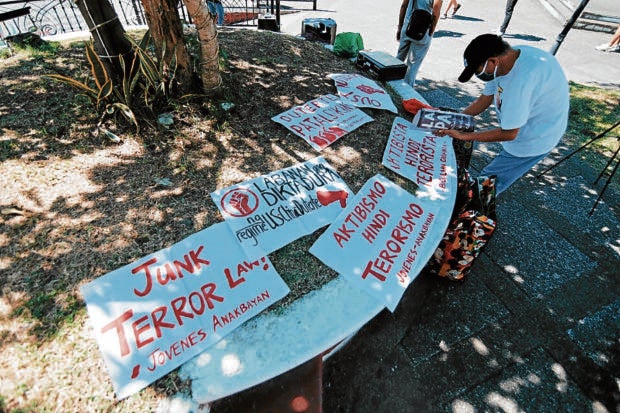 SIGNS OF THE TIMES Protest signs tackling a variety of issues confronting the Duterte administration are checked by a protester during a rally at Peñaranda Park in Legazpi City before the President delivered his State of the Nation Address on Monday. —GEORGE GIO BRONDIA

MANILA, Philippines — Hours leading to President Rodrigo Duterte’s State of the Nation Address (Sona) on Monday, several groups in the provinces took to the streets to express their indignation over issues facing the country amid the new coronavirus disease (COVID-19) pandemic.

In Baguio City, some 80 members of progressive and religious groups staged a prayer rally in front of the Baguio Cathedral to protest the antiterror law.

The protesters brought with them paper cranes, which, they said, symbolized their aspirations. The Diocese of Baguio and Church-based Taripnong Para ti Kapya (Gathering for Peace) organized the protest and a related forum at the diocese’s Social Action Center.

Wearing face masks printed with the messages, “Junk terror law,” “Tulong hindi kulong (aid not imprisonment)” and “Mass testing now,” the protesters prayed for solutions to the health, economic and political crises that beset the country.

In Angeles City, at least 20 members of Bagong Alyansang Makabayan marched around EPZA Resettlement, demanding medical solutions to the coronavirus, jobs and food.

In Laguna province, police briefly held seven members of the youth activist group Anakbayan who were on their way to “SONAgkaisa,” a mass protest at the University of the Philippines Los Baños (UPLB).

Police Lt. Col. Louie Dionglay, Los Baños police chief, said the protesters were stopped at a checkpoint because the jeepney they had rented was traveling “out of line” or route. They were later released without charges.

In Cavite province, police said they would file charges against 62 members of militant groups that tried to cross provincial borders to join the UPLB rally.

Joy Caldo of Student Christian Movement of the Philippines-Cavite State University said their group, on four jeepneys, was stopped near South Luzon Expressway in Carmona, Cavite.

Protesters in Bicol region decried what they called was “intimidation” from police during a pre-Sona protest.In Iloilo City, around 500 protesters led by Church-based, progressive and political groups gathered at Iloilo Sunburst Park to hold their own version of the Sona.

Wearing face masks and standing a meter apart, the protesters assailed the “failure of the national government” to address the pandemic. 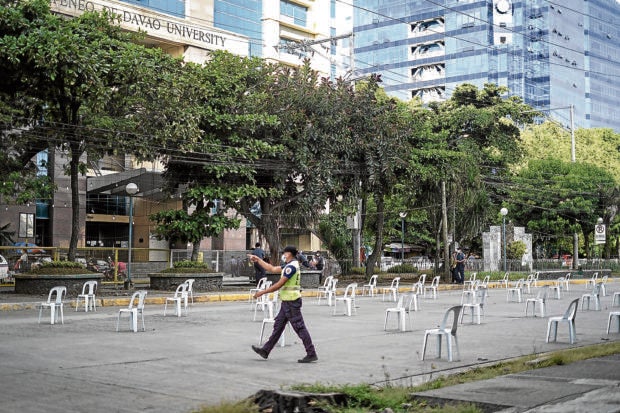 PROTEST CANCELED A protest rally on the day President Duterte will deliver the State of the Nation Address did not push through in Davao City after negotiations ended on an impasse. Protesters said the police insisted on restricting people in the rally and barricaded Freedom Park. KARLOS MANLUPIG

Similar protest actions were held at Pastrana Park in the capital town of Kalibo in Aklan province and in Roxas City in Capiz province.

In Cebu province, members of Bagong Alyansa Makabayan-Central Visayas staged a rally in front of the compound of ABS-CBN in Mandaue City to protest the shutting down of the media network.

In Bacolod City, churches held a “holy hour” while Mr. Duterte delivered his Sona. Bishop Patricio Buzon said it was necessary to pray for the country’s leaders so they “may be given an understanding heart, be able to discern right from wrong and serve the common good above personal interest.”

In Davao City, workers assailed what they described as “failure” of the Duterte administration in addressing labor issues.

The police mounted a barricade around Freedom Park and arranged plastic chairs, explaining that this would ensure physical distancing during the protest.