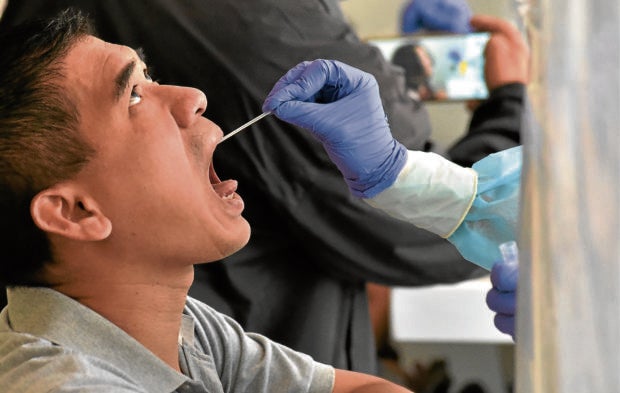 TESTS CONTINUE Continuous testing and tracing are important to keep COVID-19 cases in Baguio City at manageable levels. The city government, however, laments that disregard of health protocols have resulted in an increase in infections recently. EV ESPIRITU

The latest cases were the highest here in a day that officials said were partly due to “alcohol-drinking practices.” Citing accounts from contact tracers, Mayor Benjamin Magalong said some of the new patients were construction workers who shared a glass during a drinking party.

Officials also monitored gatherings in villages past the curfew hours between 10 p.m. and 4 a.m. that caused authorities to install checkpoints in 128 villages.

“Increase in cluster cases has shown that health standards and protocols are deemed worthless when people let their guards down and become complacent,” Magalong said in a statement.

On Saturday, 14 cases were also recorded in the city, adding to the 95 recorded since March. Forty-eight of these were active cases.

The city government has requested for more policemen and civilian volunteers to help in contact tracing.

Magalong, who was appointed the government’s COVID-19 czar on contact tracing, said they would field more contact tracers to cover all patients and would augment isolation facilities for those who would undergo quarantine.

A policy limiting households to two market days and shopping mall days each week to control movement in the city was also imposed starting on Monday.

In Mountain Province, borders in the neighboring communities of Bontoc, the capital town, were closed on Saturday after two staff members of the provincial disaster risk reduction and management office there tested positive for COVID-19.

In Bauko town, also in Mountain Province, all travel passes to and from Bontoc were suspended to curb the virus transmission. Travel passes from Barlig town were also suspended while health workers addressed the infections, according to Mayor Clark Ngaya.

The Department of Health in the Cordillera said the rising infections in the region were due to the easing of travel restrictions, and the return of migrant workers and residents stranded outside the region when the lockdown was imposed.

In Cagayan Valley, 47 new cases were recorded on Saturday, raising the number of infections there to 291. The youngest patient was a 3-year-old girl from Tuao in Cagayan province and the oldest was a 75-year-old man from Tuguegarao City.

In Pampanga province, Vice Mayor Jimmy Lazatin of the City of San Fernando had tested positive for COVID-19. He was the second elected official in Pampanga to contract the virus. Earlier, Candaba Mayor Rene Maglanque reported having recovered after testing positive for the virus on July 18.