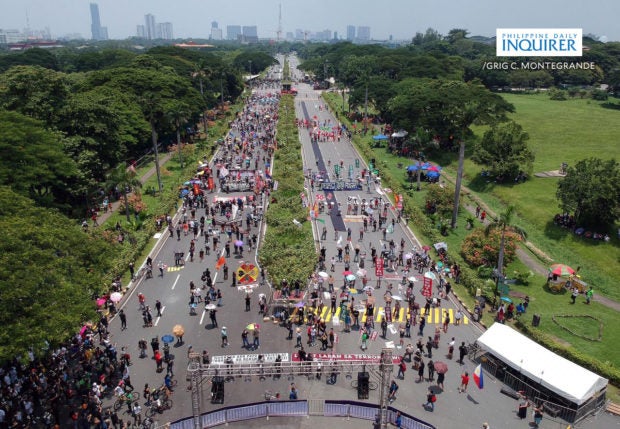 Groups from different sectors gather at the University of the Philippines, Diliman, Quezon City on Monday, July 27, to protest hours before the fifth State of the Nation Address of President Rodrigo Duterte. The protesters practiced social distancing and adhered to strict health and safety protocols. INQUIRER / GRIG C. MONTEGRANDE

MANILA, Philippines — Amid the heat of the scorching sun, COVID-19, and the government’s ban on mass gatherings, members of various groups from different sectors still managed to push through with their plan to stage the #SONAgKAISA protests at UP Diliman a few hours before President Rodrigo Duterte’s fifth State of the Nation Address (Sona).

The program only ran for two hours,  from 10 a.m. to 12 p.m., making it the shortest Sona-related protest action, according to Bagong Alyansa Makabayan secretary general Renato Reyes.

The program had a line up of civic leaders, lawmakers, and human-rights lawyers speaking about issues such as the government’s response to the pandemic, the ABS-CBN shutdown, the Anti Terror law, and the welfare of laborers, frontliners, and disenfranchised jeepney drivers.

Human rights lawyer Chel Diokno criticized the government’s priorities in the face of a public health crisis, pointing out that the administration’s supporters are pushing for constitutional amendments instead of dealing with COVID-19.

Veteran journalist Ces Drilon, meanwhile, denounced the government’s move to shut down ABS-CBN by denying the network a franchise. She also spoke about the importance of press freedom.

To complete Juana Change’s look, she even brought along inflatable dolphins.