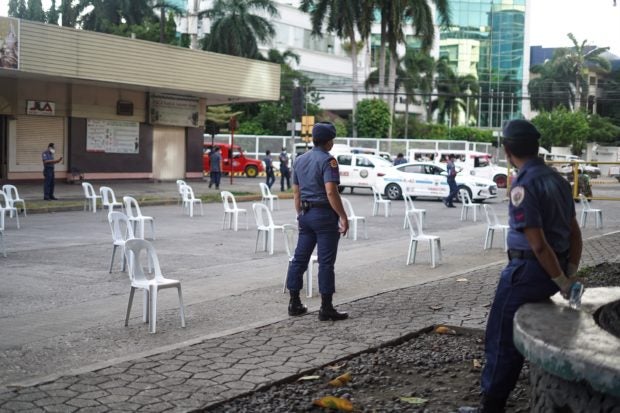 SIT DOWN RALLY? The SONA protest did not push through in Davao City after negotiations between police and protesters ended in an impasse. Protesters said the police insisted on restricting people in the rally and barricaded the Freedom Park. KARLOS MANLUPIG

DAVAO CITY—Activists called off a planned protest rally here after police imposed various restrictions as conditions, among them for the protesters to take seats, supposedly to observe health protocol.

Groups like the Kilusang Mayo Uno (KMU) would have converged at the city’s Freedom Park to air their grievances about the what they said was the failure of President Rodrigo Duterte to deliver on his promises at the start of his administration four years ago, among these the end to contractual labor.

“Years have passed since he became president and labor issues have worsened in the country. Contractualization is still here,” said PJ Dizon of KMU Southern Mindanao.

Duterte delivered his fifth and most important State of the Nation Address (SONA) on Monday afternoon (July 27) as the country continued to reel from the impact of the COVID-19 pandemic.

The groups were told to comply with a set of conditions like the police controlling the entry and exit to the park, and that all those who participate in the rally must be seated.

On Monday noon, local police forces mounted a barricade around the Freedom Park and arranged plastic chairs explaining that this would ensure physical distancing during the protest action.

The police also reminded the protesters that going outside their residences, including attending rallies, without a food and medicine pass is a violation of quarantine rules.

In the coding scheme, passes with control numbers ending in odd numbers can only be used on Mondays, Wednesdays and Fridays. Residents with passes ending in even numbers can go out only on Tuesdays, Thursdays and Saturdays.

The protesters instead took to online platforms to express their sentiments.