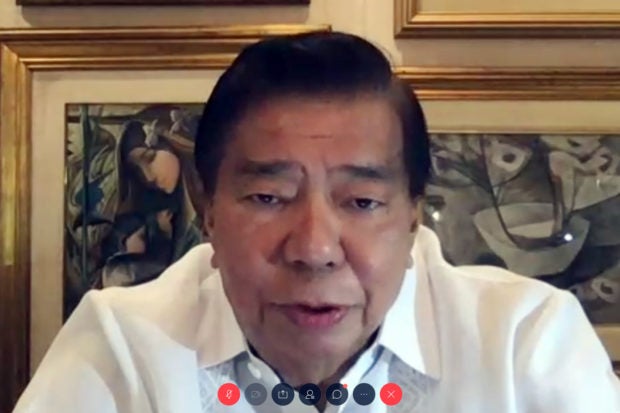 MANILA, Philippines — Senate Minority Floor Leader Franklin Drilon has refuted President Rodrigo Duterte’s claim that he was defending the Lopez clan that owns media giant ABS-CBN, insisting that he was focused on press freedom and the jobs of the workers.

Drilon, who was on the receiving end of tongue-lashing from Duterte during his State of the Nation Address (Sona), clarified that his call was for the upholding of press freedom, saying that the Lopezes’ ownership of the network was only incidental.

(When I stood up for ABS-CBN when it became an issue, the reason was for freedom of the press, it was just incidental that the Lopezes own it.)

(The issue is that 11,000 ABS-CBN workers will lose their jobs. That is what I’m fighting for. I am not indebted with the Lopezes, I have no debt from them, and we came from the same province aside from that we do not have a history to look back to.)

Drilon was mentioned several times by Duterte, from the start of his speech up to a moment before the end, saying that the senator “arrogantly” made a remark on oligarchs and supposedly defended the Lopezes, even linking Duterte’s children as oligarchs.

Duterte was making a statement about those who supposedly “take advantage of a preoccupied government” amid the coronavirus pandemic when he made the tirades about Drilon.

“One of them is Senator Franklin Drilon. In an interview, he arrogantly mentioned, among others, that oligarchs need not be rich. Then he linked the anti-dynasty with oligarchy and the topic was my daughter and son,” Duterte said.

Later on, Duterte also questioned whether he was with the ACCRA Law Office that allegedly lawyered for the Ayala family in their water concession agreement.  According to Drilon, he did not serve as counsel for any concession agreement, and that he was no longer with ACCRA when the contracts were entered.

(No, I have done nothing to be a lawyer of the Lopezes for the contract entered into the government, I have no interests with the water concession agreement that the President was saying, I was not with ACCRA when the said contract was approved.)