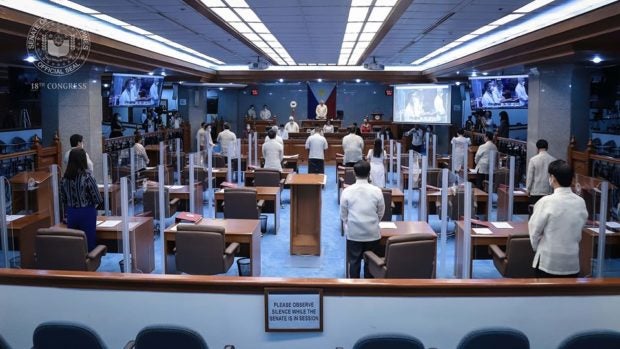 OPENING PRAYER: Senators bow their heads in prayer during the opening of the 2nd Regular Session of the 18th Congress Monday, July 27, 2020. Some senators to be led by Senate President Vicente Sotto III will proceed to the House of Representatives in the afternoon to hear the President’s 5th State of the Nation Address in a hybrid joint session. Photo by Henzberg Austria/Senate PRIB

MANILA, Philippines — Amid the threat posed by the COVID-19 pandemic, lawmakers opened the second regular session of the 18th Congress Monday morning in a “hybrid” manner, hours before President Rodrigo Duterte is set to physically deliver his fifth State of the Nation Address (Sona) at the Batasang Pambansa in Quezon City.

In a first, the Senate and the House of Representatives opened the second regular session with some lawmakers physically attending the proceedings while others participated through video conference.

Later in the afternoon, House lawmakers will be joined by senators to convene in a joint session at the Batasang Pambansa Complex for Duterte’s penultimate Sona. 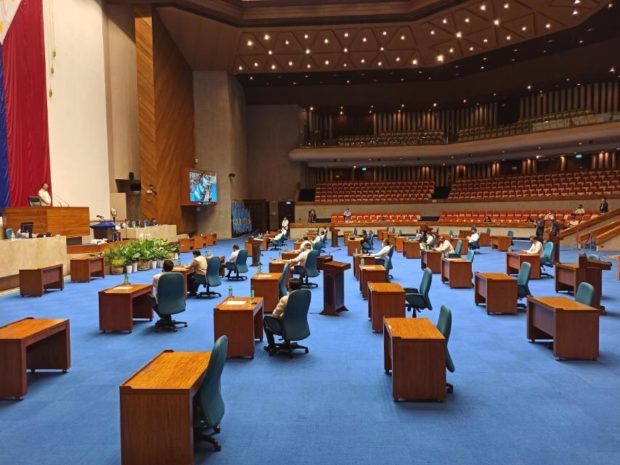 Opening of the second regular session of the 18th Congress at the House of Representatives. Contributed photo.

In previous years, Cabinet members, lawmakers, local government officials, ambassadors and other guests would fill up the House session hall, which has a seating capacity for around 1,500 people.

But due to the pandemic, the President would have to deliver his speech before a limited number of lawmakers to adhere to health protocols and physical distancing measures.

Malacañang, meanwhile, has organized virtual Zoom viewing rooms where government officials and other personalities can virtually attend this year’s Sona.

For the second regular session of the 18th Congress, the Senate will prioritize the third and final reading approval of the proposed Bayanihan to Recover as One Act, or Bayanihan 2, according to Sotto.

Among other priority measures include the proposed Medical Scholarship Act, the Expanded Solo Parents Act, the Coconut Farmers and Industry Trust Fund Act, the Reserve Officers’ Training Corps, the creation of the Department of Disaster Resilience, amendments to Public Service Act and the Agrarian or Agricultural Credit Cooperative Condonation Act.

Meanwhile, the House is looking to focus on “lives and livelihood” especially in light of the pandemic that has affected millions of Filipinos.

Like the Senate, Cayetano said the House will prioritize deliberations on COVID-response-related measures such as the Bayanihan 2 as well as the proposed Accelerated Recovery and Investments Stimulus for the Economy (ARISE) Act and the COVID-19 Unemployment Reduction Economic Stimulus (CURES) Act of 2020.

Romualdez said that, in record time, the House approved the 2020 national budget on third and final reading on September 20, 2019 or exactly one month after the August 20, 2019 submission of the Department of Budget and Management (DBM).

The House will continue its deliberations on some of the priority legislation of Duterte such as the Creation of the Department of Disaster Resilience (DDR), which is under the period of interpellations, Romualdez also said.

Other priority legislation at the House include proposed fire protection modernization programs, which is under committee report preparation; the creation of the Department of Water Resources and Services and creation of the Water Regulatory Commission, as well as Additional Benefits for Solo Parents are both under committee or technical working group deliberations.