Ahead of SONA protests, DOJ affirms right to assemble

MANILA, Philippines — Justice Secretary Menardo Guevarra affirmed on Saturday that the right to peaceably assemble is enshrined in the Constitution that all government officials and employees swore to “uphold and defend” and is subject only to reasonable regulation.

“The right of the people to peacefully assemble for the redress of grievances is a fundamental right protected by the Constitution,” Guevarra said, referring to Section 4, Article III of the Constitution, or the Bill of Rights.

“Its lawful exercise, however, such as with respect to the time and place where it may be carried out, is subject to reasonable regulation by the authorities in the interest of public order, health and safety,” he added. 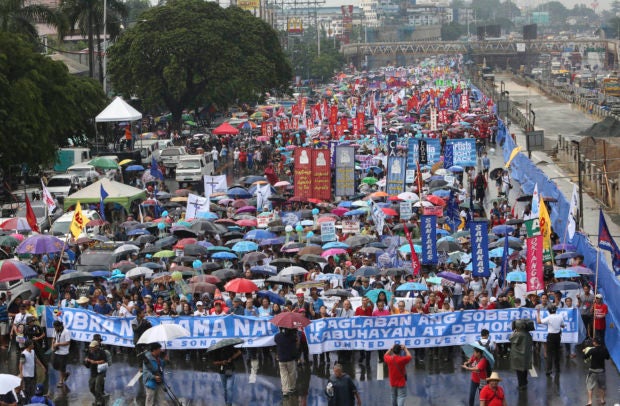 THE OLD NORMAL Thousands of protesters pressed together during a protest march in last year’s opening of Congress months before the COVID-19 pandemic. —PHOTOS BY MARIANNE BERMUDEZ

Guevarra expressed the opinion after the Department of the Interior and Local Government (DILG), headed by former Gen. Eduardo Año who also swore to “uphold and defend” the Constitution, signed an unnumbered advisory on July 23 suggesting that local governments should not issue permits for demonstrations during President Rodrigo Duterte’s State of the Nation Address (Sona) on Monday.

When asked about the DILG advisory, Guevarra suggested that local authorities and law enforcers “assess the actual situation” after some mayors said they would have to comply with the DILG advisory and not issue permits.

“I cannot substitute my judgment for theirs. But a blanket and absolute prohibition of peaceful assemblies, unless necessitated by paramount considerations of public order, health and safety, runs counter to the constitutional right of the people to peaceably assemble for the redress of grievances,” Guevarra said.

But the public interest National Union of Peoples’ Lawyers (NUPL) said in a statement that the Public Assembly Act, or Batas Pambansa Blg. 880, mandates that law enforcers shall not interfere with the holding of a public assembly.

The same law also states that “no public assembly with a permit shall be dispersed,” and even without a permit, “no person can be punished or held criminally liable for participating in or attending an otherwise peaceful assembly.”

The NUPL also scored the DILG and the Philippine National Police for threatening fundamental constitutional rights by issuing the prohibition on protests.

“This pronouncement from the PNP threatens the exercise of the people’s fundamental right to assemble, to express their sentiments, and to demand accountability from the government at a time when accountability is needed most,” the group said in a statement.

The Quezon City government, which has jurisdiction over some of the rallies’ venues, said on Friday that in compliance with the DILG advisory, it would no longer process applications for permits to organize or hold public assemblies and revoked those that were issued earlier.

But the peasant group Kilusang Magbubukid ng Pilipinas (KMP) said that no amount of threat or warning from the government can stop or hamper the activities they scheduled for Monday. 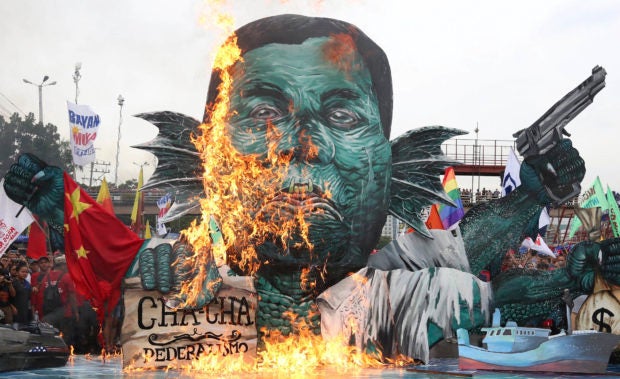 FIERY TREATMENT Leftist groups burn an effigy of President Duterte during his fourth State of the Nation Address last year.

“The people have all reason to protest and show outrage with the aggravation of mass unemployment, poverty and hunger, and the crimes of the Duterte administration,” said KMP chair Danilo Ramos.

Ramos said groups of farmers, workers, urban poor, Church people, youth and artists, and other sectors will “proceed as planned” with their protests along Commonwealth Avenue on Monday.

But he also assured officials that they will observe health safety measures because of the COVID-19 pandemic.

MMDA Chair Danilo Lim said he had deployed over 1,000 personnel to manage traffic and clear obstructions along Commonwealth Avenue, IBP Road and other major roads in Quezon City to ensure a “peaceful and orderly Sona.”