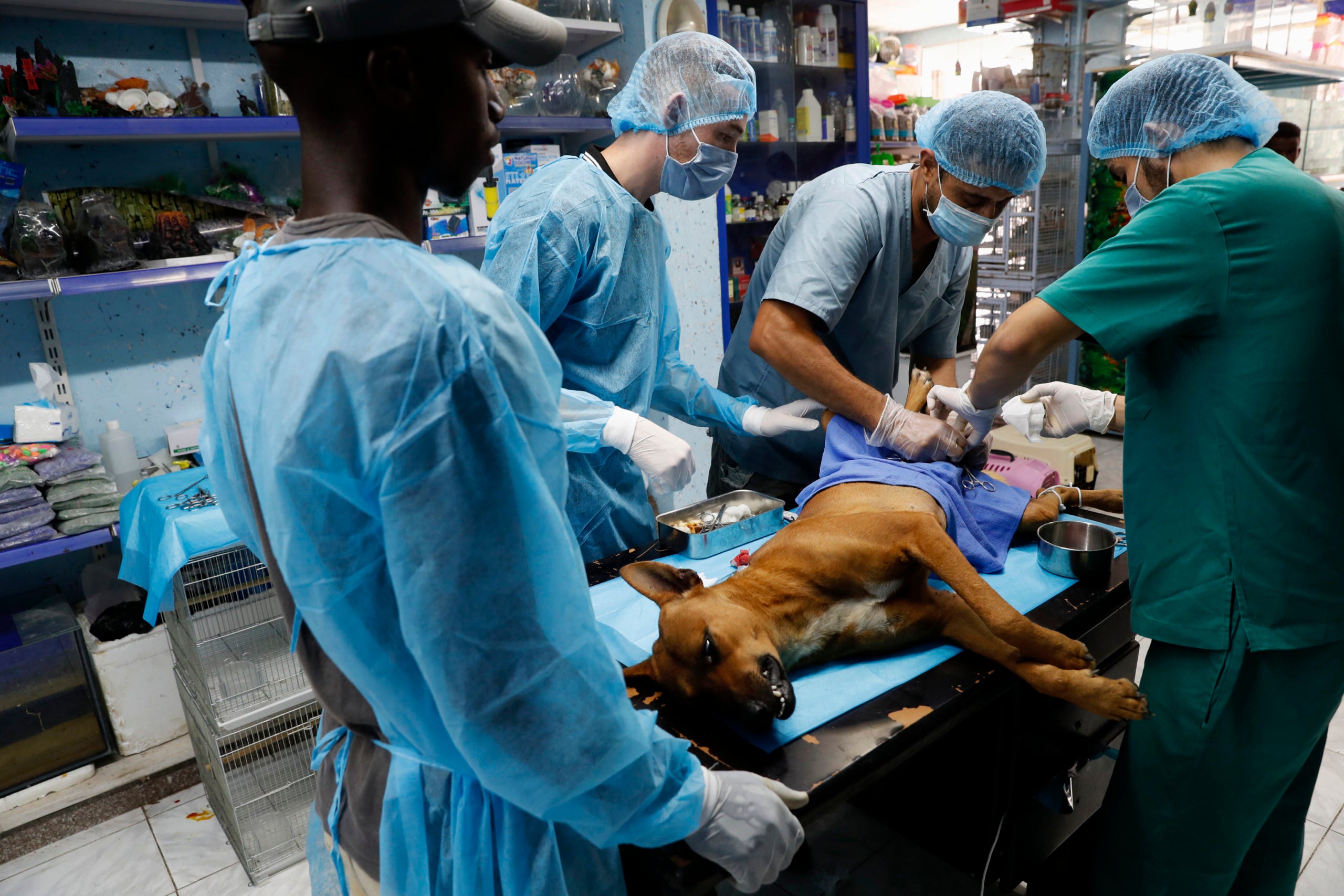 Palestinian veterinarians neuter a dog at a clinic in Gaza City, Monday, July 13, 2020. In the impoverished Gaza Strip, where most people struggle to make ends meet amid a crippling blockade, the suffering of stray dogs and cats often goes unnoticed. (AP Photo/Adel Hana)

GAZA CITY, Gaza Strip  — In the impoverished Gaza Strip, where most people struggle to make ends meet amid a crippling blockade, the suffering of stray dogs and cats often goes unnoticed.

Said el-Er, who founded the territory’s only animal rescue organization in 2006, has been trying to change that. He and other volunteers rescue dogs and cats that have been struck by cars or abused and nurse them back to health — but there are too many.

So in recent weeks, they have launched Gaza’s first spay-and-neuter program. It goes against taboos in the conservative Palestinian territory, where feral dogs and cats are widely seen as pests, and many view spaying and neutering as forbidden by Islam.

“Because the society is Muslim, they talk about halal (allowed) and haram (forbidden),” el-Er said. “We know what halal is and what haram is, and it’s haram (for the animals) to be widespread in the streets where they can be run over, shot, or poisoned.”

Islam teaches kindness toward animals, but Muslim scholars are divided on whether spaying and neutering cause harm. Across the Arab world, dogs are widely shunned as unclean and potentially dangerous, and cats do not fare much better.

El-Er and other advocates for the humane treatment of animals face an added challenge in Gaza, which has been under an Israeli and Egyptian blockade since the Islamic militant group Hamas seized power in 2007. Gaza’s 2 million residents suffer from nearly 50% unemployment, frequent power outages, and heavy travel restrictions.

With many struggling to meet basic needs, animal care is seen as a waste of precious resources or a luxury at best. El-Er’s group, Sulala for Animal Care, relies on private donations, which can be hard to come by.

El-Er says his team can no longer keep up with the number of injured animals that they find or that are brought to the clinic. “The large number of daily injuries is beyond our capacity,” he said. “That’s why we resorted to neutering.”

On a recent day, volunteers neutered a street dog and two cats that had been brought in. There are few veterinary clinics and no animal hospitals in Gaza, so they performed the operations in a section of a pet store that had been cleaned and disinfected.

“We have shortages in capabilities, tools, especially those needed for orthopedic surgeries,” said Bashar Shehada, a local veterinarian. “There is no suitable place for operations.”

El-Er has spent years trying to organize a spay and neutering campaign but met with resistance from local authorities and vets, who said it was forbidden. He eventually secured a fatwa, or religious ruling, stating that it is more humane to spay and neuter animals than to consign an ever-growing population to misery and abuse.

Once the fatwa was issued, el-Er said local authorities did not object to the campaign as a way of promoting public health and safety. The Hamas-run health and agriculture ministries allowed veterinarians to carry out operations and purchase supplies and medicine, he said.

The Gaza City municipality provided land for a shelter earlier this year. Before that, El-Er kept the rescued animals at his home and on two small tracts of land that he leased.

The new shelter currently houses around 200 dogs, many of them blind, bearing scars from abuse or missing limbs from being hit by cars. At least one was adjusting to walking with a prosthetic limb. A separate section holds cats in similar shape.

The group tries to find homes for the animals, but here too it faces both economic and cultural challenges. Very few Gazans would keep a dog as a pet, and there’s little demand for cats.

Some people adopt animals from abroad, sending money for their food and care.

Over the past decade, international animal welfare groups have carried out numerous missions to evacuate anguished animals from makeshift zoos in Gaza and relocate them to sanctuaries in the West Bank, Jordan and Africa.

But there are no similar campaigns for dogs and cats, and Gaza has been sealed off from all but returning residents since March to prevent a coronavirus outbreak.

El-Er’s phone rang recently and the caller said a dog had been hit by a car. Volunteers from Sulala brought it back to the shelter on the back of a three-wheeled motorbike and began treating it. El-Er says they receive around five such calls every day.