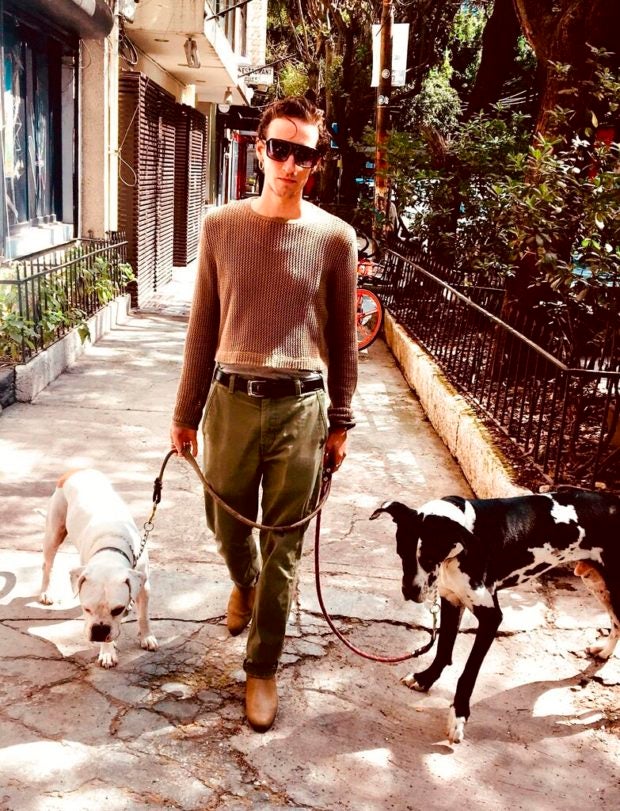 In this photo courtesy of Sophie Fustec shows her brother Pablo Fustec walking his dogs Sasha, right, and Felipe in Mexico City in Nov. of 2019. The dual citizen of France and Mexico died on July 5, 2020 after jumping into a scalding hot spring the previous month, on June 13, in a failed attempt to rescue Sasha. He had adopted the black and white Great Dane after finding it in a Mexico City street following the 2017 earthquake. (Sophie Fustec via AP)

MEXICO CITY — The devotion of dogs to people has been remarked upon for centuries. In Mexico, one man’s love for his dog cost him his life.

Pablo Fustec, a dual citizen of France and Mexico, died this month after jumping into a scalding hot spring in a failed attempt to rescue Sasha, one of his dogs. He had adopted the black and white Great Dane after finding it in a Mexico City street following an earthquake that killed several hundred people in the country in September 2017.

“It’s an extreme act,” sister Sophie Fustec, who is in Paris, said in an interview on Thursday. But, she said, “his dogs were like his babies” and he would have done “the same with me or another human being.”

The family plans a memorial – outdoors in line with pandemic precautions – for Fustec on Sunday in Argenteuil, on the outskirts of Paris.

Fustec, whose ashes were brought to France by his partner, Jonathan Ramos, had lived in Mexico for a decade. He had a background in theater and architecture, and planned a project to teach job skills to ex-convicts so they could successfully re-enter society.

On June 13, Fustec and Ramos were hiking with their three dogs in Zinapécuaro in Michoacán state, west of Mexico City. Sasha fell into the spring and Fustec jumped in after the male dog, only realizing that he was grievously injured after climbing out, according to his sister.

Sasha died at the spot. Ramos carried Fustec on his back for 40 minutes until they could find an ambulance, Sophie Fustec said. Her brother suffered burns over 70 percent of his body as well as septic shock, and was eventually transferred to a hospital in Mexico City, where family and friends launched a blood drive ahead of expected surgeries.

Ramos visited, but was not allowed to enter Fustec’s room because of tighter restrictions aimed at preventing the spread of the new coronavirus. He made signals of support and affection to his partner from outside the room. Fustec’s mother, who is Venezuelan, sent her son a message by telephone to say “everybody was moving mountains to find the blood that he needed,” his sister said.

Fustec died on July 5, a day after his first operation.

One online tribute to Fustec referred to an account in the Indian epic poem “Mahabharata” of Yudhishthira, the royal who refused to abandon his loyal dog as a condition for entering heaven.

Sophie Fustec, a musician who performs with the stage name “La Chica,” said she had spoken to her brother while he was hospitalized. He was sad about the death of Sasha, but his attitude was positive, she said.

2020 has been a “rough” year, Fustec said, noting the pandemic and the police killing of George Floyd in the United States. But she said her brother had committed a selfless act that “gave me hope for the future.”