He has lived through the 1971 bombing at Plaza Miranda, the vagaries of political drama in his earlier incarnations as senator and congressman, as well as two terms as mayor of Toledo City.

His latest feat is beating the new coronavirus disease (COVID-19) following a 20-day confinement in a private hospital in Cebu City, despite an ongoing battle with colon cancer and hypertension.

“I didn’t think of dying. I was thinking that I am immortal,” Osmeña said half-jokingly, albeit with a slight slur.

The situations Osmeña has survived were indeed life-threatening.

At Plaza Miranda in August 1971, two grenades thrown onstage during the miting de avance of the opposition Liberal Party (LP) killed nine people. Osmeña, one of LP’s senatorial candidates, was among those injured. (He and former TV and radio talent Eddie Ilarde are now the only two surviving premartial law senators in the country.)

And while Osmeña survived his ordeal with COVID-19, his contemporary in the post-Edsa Senate, Heherson Alvarez, was not as fortunate. Alvarez, 80, succumbed to the disease in April.

Osmeña and Alvarez both fought Ferdinand Marcos’ dictatorship and went into exile in the United States after Marcos declared martial law in 1972.

After the dictatorship was toppled in 1986, the two men joined the Senate slate drafted by President Corazon Aquino that dominated the Eighth Congress in 1987.

All told, Osmeña served three nonconsecutive terms as senator and one term as congressman before embracing local politics.

His advanced age is seen as a factor that makes him more vulnerable to the disease caused by the new coronavirus.

His high blood pressure and the effects of the cancer treatment he receives in Singapore are also supposed to cut his chances of making it.

“But I was really confident that I was going to beat COVID,” he said. “Everybody else was afraid, because I am 85 years old and everyone my age is vulnerable. But I came home on July 8. I have cancer, I have high blood [pressure], and I beat COVID.” 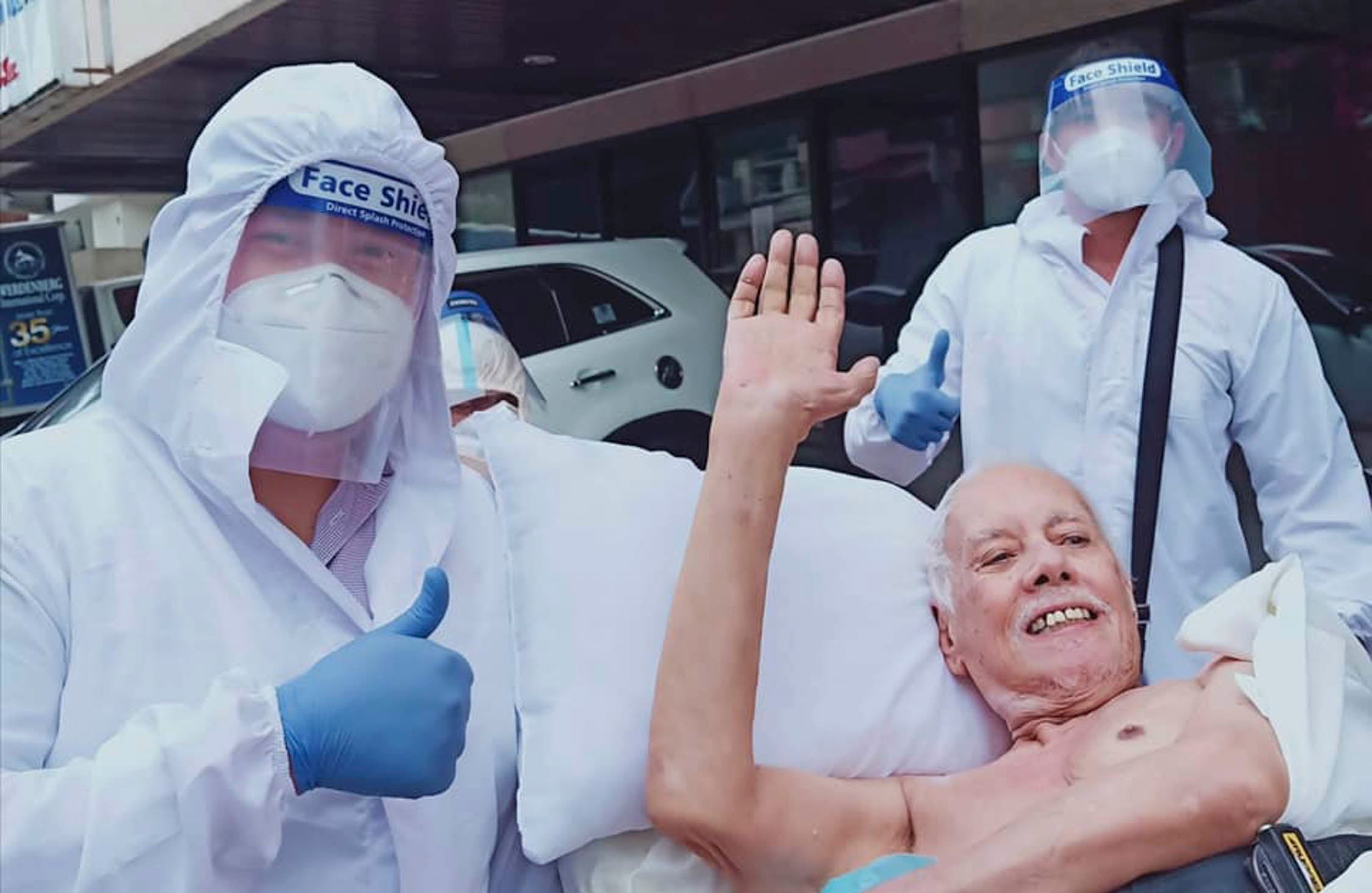 DISCHARGED John Osmeña waves to cheering supporters who waited for his discharge from a private hospital in Cebu City on July 8 after a 20-day confinement due to COVID-19. The 85-year-old veteran of national and local politics said he was “conscious” during his hospital stay and even made plans to help his favored local candidates in the 2022 campaign. —FROM THE FACEBOOK PAGE OF FERLIZA CONTRATISTA

Osmeña, who once chaired the powerful finance and public services committees in the Senate, displayed a stubborn streak in admitting that he went about his business in Toledo despite warnings about the disease and the precautions repeatedly suggested by health and local officials.

“I was in my property, in my office building, where I was supervising construction. I was going to the hardware [store] to buy materials. There always were people—carpenters, painters, about 40 laborers the whole time,” he recalled.

Osmeña said he “most likely” got the disease from “one of the workers” he saw every day.

It did not help that physical distancing was almost impossible because as an easily recognizable character, he drew people who would stop his vehicle to chitchat or tell him their troubles.

Osmeña ignored the tell-tale signs after catching the virus until his employees were forced to call his sister, Annie Osmeña Aboitiz, to report that he had “a loud cough and a fever.”

Aboitiz promptly sent someone to “arrest” him, he said: “She sent people to block my vehicle in the middle of the street. Pinahuli ako. When I refused, she called the head of the hospital who is also our nephew, Dr. Justin Osmeña.”

At the “special clinic that handles COVID patients in Cebu,” Osmeña said he tested positive for the coronavirus and was prevented from going home.

“I asked how long I would be staying … Basta my stay just grew longer and longer,” he said.

Osmeña could not provide details about his medications and his discussions with doctors, but he remembered being conscious most of the time and “thinking about who to support in local politics” in 2022. (Marjorie Perales, his successor as Toledo mayor, was top of mind.)

Local politics remains important because the provincial capitol “influences Toledo, which is a keystone in the province’s third district. And the district plays a role in provincial politics,” he pointed out.

But Osmeña has come to realize that actual participation in a political campaign would be impossible following his COVID-19 experience.

“I may be out of the hospital, but not 100-percent recovered. My strength has been badly shot. I am here at home in Cebu, always in bed. If I get off, I need a wheelchair. It’s not the same as how I was pre-COVID. The disease has taken its toll,” he said, adding:

“I am very weak, I cannot stand too long. My voice can still be loud but my body has really been affected. Even if I recover my strength, [my capabilities are now limited]. I cannot go on the campaign trail, I cannot go onstage or meet people. So the best is to support candidates.”

Told the cliché that God might still have a plan for him, Osmeña said he wondered about the same thing: “I could turn that into a campaign line. Something like, matanda na ako pero di pa rin natepok—I’m old but I wasn’t done in.”

“I really don’t know,” he said. “I don’t want to assume. For all we know, this could be it—baka ito na. But I’m still happy to be around to make life hard for many people. Maraming kalaban, eh—many enemies.”

In the meantime, said the ever-feisty politician, he would concentrate on agriculture when he got strong enough.