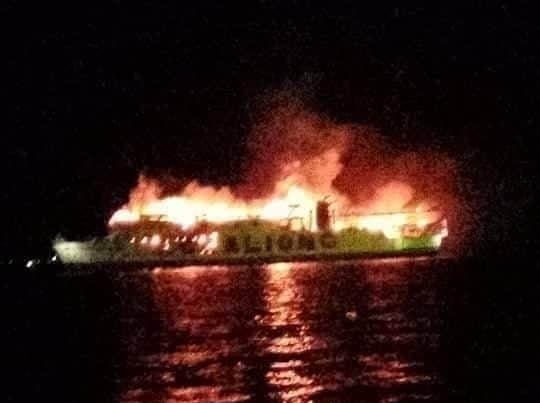 CEBU CITY – A passenger ship caught fire at the sea off Catmon town, north Cebu around 10 p.m. on Thursday, July 23.

The captain and all 47 crew members of MV Filipinas Dinagat managed to abandon the ship and were all safe, said Commander Alvin Dagalea, spokesperson of the Philippine Coast Guard in Central Visayas (PCG-7).

There were no passengers or rolling cargoes on board the ship during the incident.

“The ship was only carrying assorted goods,” Dagalea said.

Cokaliong Shipping Lines, which owns MV Filipinas Dinagat, had yet to issue a statement regarding the incident as of 11:30 p.m. Thursday.

According to Dagalea, the ship left Pier 1 in Cebu City at 7 p.m. on Thursday on its way to Palompon town in Leyte.

But around 10 p.m., the PCG-7 received a distress call, informing them that the ship was burned.

All ships near the place were also asked to assist in rescuing the crew members of MV Filipinas Dinagat.

Dagalea said 95 percent of the ship was burned down.

He said PCG-7 would be conducting an investigation to find out the cause of the fire.