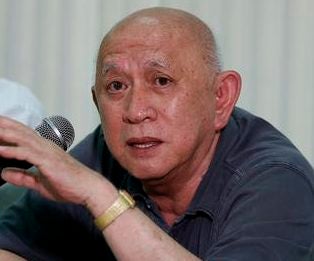 Agcaoili would have turned 76 on August 8, Sison, who co-founded the Communist Party of the Philippines (CPP), said in a Facebook post.

According to Sison, the cause of Agcaoili’s death was “pulmonary arterial rupture which caused massive internal bleeding,” although he noted that it was not related to COVID-19.

“The National Democratic Front of the Philippines (NDFP) announces with deep sorrow the untimely passing of Ka Fidel V. Agcaoili today, 23 July 2020 at 12:45pm in Utrecht, The Netherlands. He would have turned 76 on 8 August,” Sison said.

“According to the doctor, the cause of his death was pulmonary arterial rupture which caused massive internal bleeding. It was not Covid-19 related,” he added.

ANNOUNCEMENT OF THE DEMISE OF FIDEL AGCAOILI, CHAIRPERSON OF THE NDFP NEGOTIATING PANELThe National Democratic Front…

Agcaoili’s remains would be flown to the Philippines in accordance with his family’s wishes, the communist leader added.

As NDFP negotiator, Agcaoili participated in peace talks between the communist rebels and the Philippine government —  discussions that started nicely as President Rodrigo Duterte and even left-leaning activists appeared to be in sync, with three activists even appointed to the Cabinet.

However, distrust between the two sides creeped in when the government accused the rebels of breaking ceasefire declarations, while the communists slammed several of Duterte’s policies including the drug war, the stance on the West Philippine Sea, and the continuous problems faced by peasants and laborers.