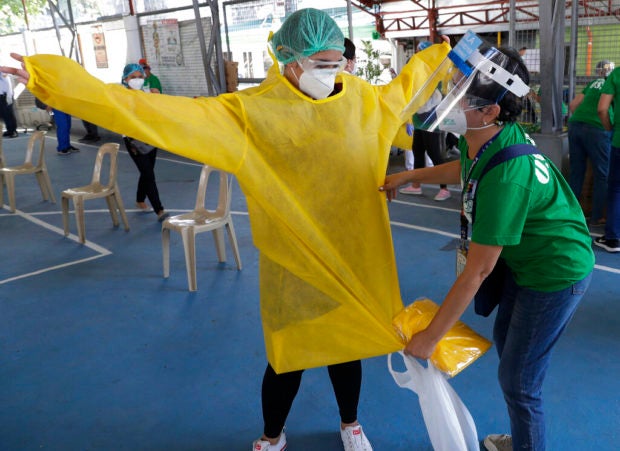 A health worker puts on a protective suit as they conduct mass testing for COVID-19 in Manila, Philippines on Friday, May 8, 2020. The whole of metropolitan Manila is still under enhanced community quarantine to prevent the spread of the new coronavirus. (AP Photo/Aaron Favila)

MANILA, Philippines — It is unfair to conclude that the government’s coronavirus disease 2019 (COVID-19) task force failed to respond to the pandemic is an “unfair assessment,” Cabinet Secretary Karlo Nograles said Thursday noting that the country is in a “good place” compared to more developed countries.

Nograles, who is also the co-chairperson of the Inter-agency Task Force (IATF) for the Management of Emerging Infectious Diseases, said the body was able to prevent millions of infections when it implemented quarantine measures.

“I think that’s an unfair assessment of the work that the IATF has done,” Nograles said in an interview on ANC.

Malacañang shrugged off the statement and accused the opposition of supposedly “resorting to politicking” when it claimed that the task force was failing.

“In fact, mathematicians and statisticians and scientists say if we did not act as quickly as we did, when we did, we would have seen 1.3 million cases of COVID-19 by this time around. The fact that that had not yet happened, shows that the IATF, the President acted fast,” Nograles pointed out.

(Right now, we can see that we have increased our bed capacity, ICU capacity, number of ventilators, PPE, testing capacity. So we were able to respond. It shows that we were able to decrease our fatality rate.)

Nograles said the Philippines is in a “good place” compared to other developed countries which recorded an overwhelming number of cases and deaths.

“You can also look at the other side of the world and see other countries where community transmission has skyrocketed, deaths are so high, the number of cases are so high, their health capacities are overwhelmed. And these are developed and first world countries,” he said.

“And the fact that we’ve been able to manage it, shows na compared to these countries, we’re also in a good place. Of course, there will be countries who have done better and we benchmark with those countries. And we try our best to match them.”