Mike Pompeo urges ‘entire world’ to stand up to China 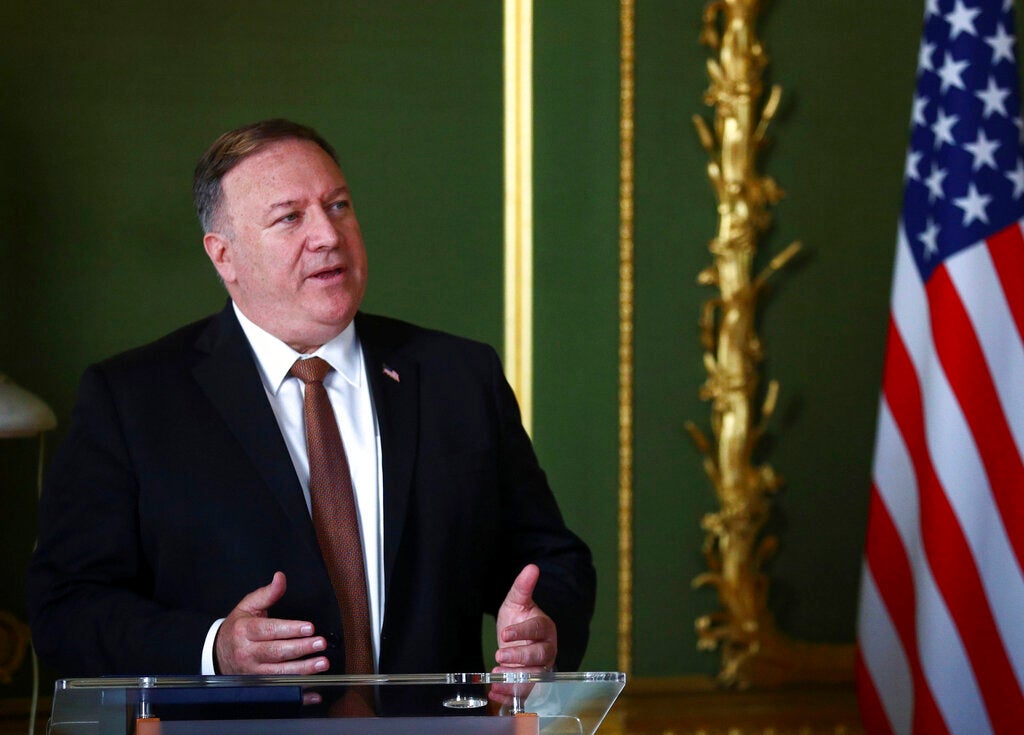 US Secretary of State Mike Pompeo urged “the entire world” Tuesday to stand up to China but denied forcing Britain’s hand in its decision to ban the communist superpower’s private telecoms giant Huawei.

Pompeo met Prime Minister Boris Johnson in the heat of an emerging crisis in relations between London and Beijing over everything from China’s treatment of Hong Kong to its persecution of more than one million ethnic Uighurs and other mostly Muslim minorities.

The top US diplomat used a press conference with his UK opposite number Dominic Raab to air a host of grievances President Donald Trump’s administration had built up against Beijing.

He accused China of engaging in “a cover-up and co-opting” the World Health Organization by allegedly suppressing early details of the “preventable” coronavirus pandemic that has killed more than 610,000 people globally.

The Chinese Communist Party’s “exploitation of this disaster to further its own interest has been disgraceful,” he said.

Pompeo also castigated China for claiming disputed areas of the South China Sea “you have no lawful claim to” and trying to “threaten and bully” its neighbors.

“We think that the entire world needs to work together to ensure that every country, including China, behaves in the international system in ways that are appropriate and consistent with the international order,” he said.

‘Right thing to do’

This trip was announced just a day after Johnson last week decided to risk drawing the wrath of China and phasing out Huawei from the speedy new system.

But Pompeo and Raab both tried to dispel suggestions the White House was dictating British affairs.

“I think that decision was made not because the United States said it was a good decision but because the leadership here in the United Kingdom concluded (that it was) the right thing to do,” Pompeo said.

Johnson is keen to avoid being too closely associated with Trump — whose approval in Britain is languishing at around 20 percent — despite the “special relationship” between the two historical allies.

The UK government stresses it only ditched Huawei after new US sanctions imposed in May endangered the safety of future 5G equipment produced in China.

“The reality is it is a result of US sanctions,” Raab said.

Washington argues that the Chinese Communist Party can force Huawei to either intercept UK data or shut down the British network in times of war.

Huawei has always denied this and Britain had previously concluded that it could mitigate any security flaws.

But the range of steps taken by Johnson in the past month threaten to bring an early end to a “golden decade” in cooperation that former British finance minister George Osborne promised on a visit to Beijing in 2015.

Britain followed that up on Monday by suspending its extradition treaty with Hong Kong and extending an arms embargo of “potentially lethal weapons” that had previously applied only to mainland China.

The UK parliament’s release of a delayed report that took the government to task for failing to properly look into any Russian meddling in the 2016 Brexit referendum also hung over Pompeo’s visit.

The report was commissioned in response to concerns that Moscow attempted to help Trump win the presidency in 2016.

Trump and Pompeo reject suggestions that Russia played any meaningful role in the vote.

Raab said Britain viewed Russia as “a top national security priority” but Pompeo did not address the issue in his public remarks.