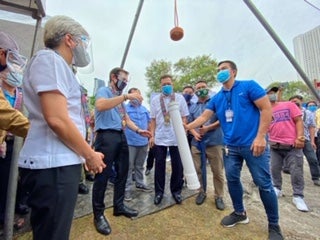 MANILA, Philippines — The construction of the first cemetery as well as a Cultural Hall for Muslim residents in Manila has started during Wednesday’s groundbreaking ceremony, the city government said.

The city government allocated P49.3 million for the cemetery, which uses about 2,400 square meters of land at the Manila South Cemetery.

Manila Mayor Isko Moreno noted that the cemetery will be in close proximity with the Muslim community in Manila, unlike before when some Muslim residents would have burial services in farther places such as Bulacan, Taguig or Mindanao.

“In recognition to the beliefs and tradition of our Muslim brothers and sisters, we are going to build the Manila Muslim Cemetery so that they will not travel far to bury their departed loved ones,” Moreno, who led the groundbreaking ceremony at the Manila South Cemetery, said in a statement.

Moreno also underscored the preservation and recognition of Muslim history and culture in the capital city.

“Why is it important to discuss the role of Rajah Sulayman in the history of Manila? It is to show that there is a need to give due recognition to the Muslims in the development of our city as it was them who founded and made great the Kingdom of Maynila before the Spanish conquest,” Moreno said.