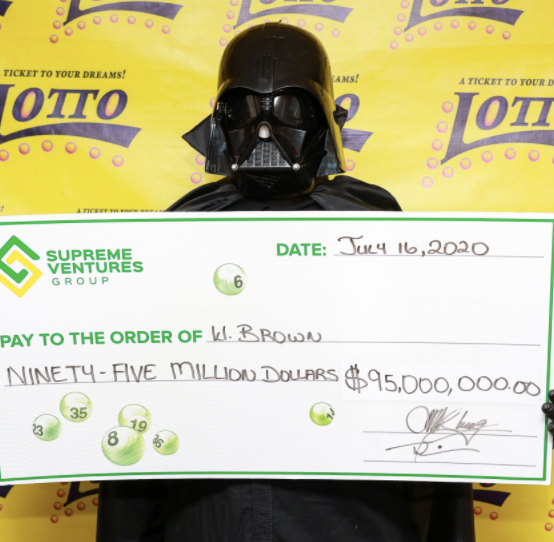 The Force was apparently very strong in one lucky lotto winner, who dressed up as the iconic “Star Wars” villain Darth Vader to receive his prize.

Brown and his female companion, who was also dressed in black clothing and mask, made a day out of the occasion by posing with the giant cheque. Another photo of the two made it look like they in the middle of a lightsabers match.

Brown had apparently been trying to win the lottery with the same set of numbers over the past 20 years, with only a few alterations along the way. The lotto winner intends to buy a coaster, a house and invest some of his winnings, as per Jamaica Gleaner last Friday, July 17.

The man disclosed that he did not buy his tickets from his usual ticket-selling outlet and was merely stopping by when he purchased the winning ticket.

Despite having a difficult life, the lotto winner also held on to the belief that lotto could turn his fortune around. Brown told the local newspaper that he has not announced his lotto win to a lot of people since he was still thinking about what he wants to do with his millions.

“Life has always been very rough,” Brown was quoted as saying. “I come from a poor family, sometimes I couldn’t attend school because my parents didn’t have it, but I told myself that God will help me one day so I can help my family.” Cha Lino/JB

After losing his house to Australian bushfire, man wins $1 million in lottery