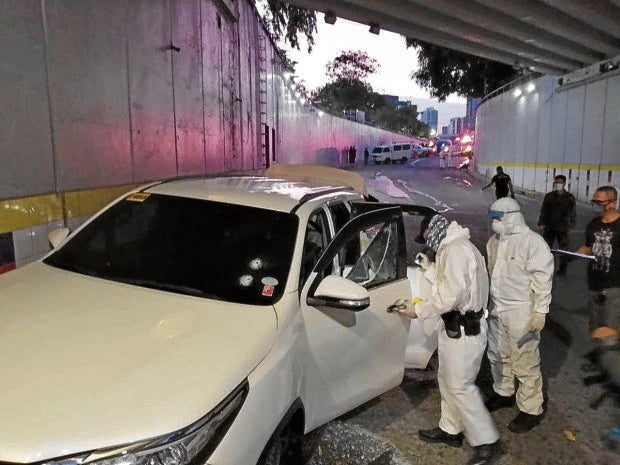 SEARCHING FOR LEADS Police investigators gather evidence at Lagusnilad Underpass where the victim, family driver Nerlbert Casido, was gunned down by four men in a sport utility vehicle without license plates. Casido’s employers, who were with him, were not hurt. —PHOTO COURTESY OF MANILA PUBLIC INFORMATION OFFICE

MANILA, Philippines — A family driver was shot dead and then robbed by four men in a sport utility vehicle (SUV) at Lagusnilad Underpass in Ermita, Manila, on Saturday afternoon, the police said.

Nerlbert Casido was driving his employers home when the suspects, who were wearing black facemasks and bulletproof vests, blocked their vehicle at 5:35 p.m. on the southbound lane.

The gunmen alighted from a gray Mitsubishi Adventure without a license plate and fired twice at the windshield of the victims’ vehicle before breaking the window on the driver’s seat with a dumbbell. They dragged Casido out of the vehicle, shot him in the head and then took his sling bag which contained his belongings and cell phones. His employers were unharmed.

According to authorities, the suspects fled the scene and headed toward Taft Avenue. Footage from a closed-circuit television camera at City Hall showed that their vehicle passed through Taft Avenue, turned right on Finance Road and briefly stopped on P. Burgos Street.

Lt. Col. Ariel Caramoan, commander of Ermita Police Station 5, said they were conducting follow-up operations to locate the suspects, adding that the motive for the killing had yet to be determined.

On July 7, Manila’s chief inquest prosecutor Jovencio Senados was ambushed and shot dead in broad daylight on Quirino Avenue. He and his driver were headed to City Hall when a gunman aboard a black SUV opened fire at their vehicle, killing him instantly.