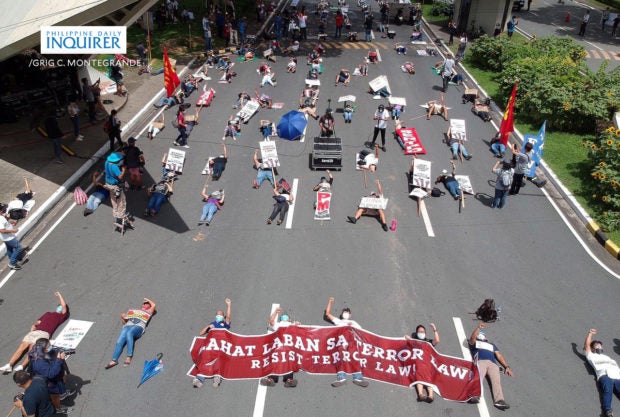 LOOK: Protestors stage a die-in at the “Resist Terror Law” rally on Tuesday, July 7, which coincides on the 128th year anniversary of the Katipunan, at the University of the Philippines in Diliman, Quezon City. The group Movement Against the Anti-Terrorism Act (MATA) express outrage over President Duterte’s failure to preserve and defend the constitution.-INQUIRER/GRIG C. MONTEGRANDE

MANILA, Philippines – Cause oriented and advocacy groups, along with individuals claiming to be victims of  the government’s red-tagging drive have  joined the call for the Supreme Court (SC) to strike down as unconstitutional Republic Act 11479 or the Anti-Terror Law.

The petition is the 10th case filed against the controversial law that has already taken effect last July 18, 2020 even without its Implementing Rules and Regulations.

In the latest petition, the SC was asked stop the convening of the Anti-Terror Council (ATC) and the exercise of its functions.

The ATC, under the law was given the authority to order the arrest of suspected terrorists and unilaterally designate persons as terrorists

They also called on the high court to stop the drafting of the IRR and the convening of the Joint Oversight Committee under Section 50 of the law.

The petitioners are asking the SC to strike down the entire law for being unconstitutional.

Prior to the enactment of ATA, petitioners represented by the National Union of Peoples’ Lawyers (NUPL) said they have already been subjected to red-tagging as communists by the government.

“Red-tagging, harassment, and killings of trade unionists continues. Intervention by State security forces in union meetings and affairs, threats and profiling of members–including of a national alliance of teachers–have been reported,” petitioners said.

“The International Labour Organization Committee on Freedom of Association has also raised concerns about ‘blanket linkages of trade unions to an insurgency’ placing unionists in situations of extreme security,” they said.

They added that even members of the legal profession were not spared. A total of 50 have been killed since June 2016, “many who were working on politically sensitive cases or advocating for land rights of farmers and indigenous peoples.

“As shown, the assailed law serves as the trigger for hands that have long been poised to shoot. Verily, the prosecution and escalated persecution of petitioners are not questions of if, but when and how large a scale the ensuing human rights crisis will be,” they added.

Similar to the first nine petitions, they said the ATA violates:

The petition was filed via electronic filing. The physical filing of the petition is scheduled on Thursday as the Supreme Court is closed for disinfection from Monday to Wednesday.