EU leaders extend summit as they haggle over budget, virus

BRUSSELS  — European Union leaders on Saturday extended their summit by an extra day, convinced they were finally closing in on a deal for an unprecedented 1.85 trillion euro ($2.1 trillion) EU budget and coronavirus recovery fund, an EU official said. 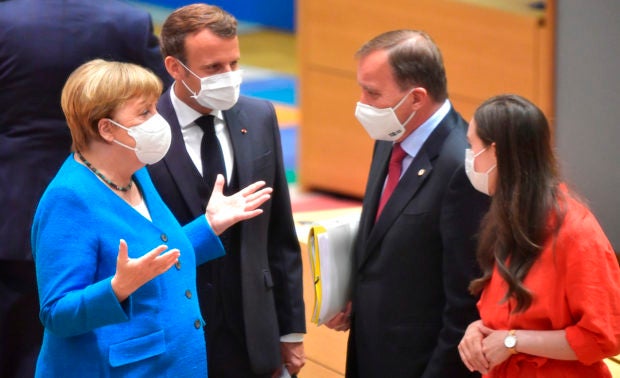 Heading into a balmy summer night, a deal was still far off, but several key nations said negotiations were at least heading in the right direction despite tensions that were running high after months of battling the pandemic.

Shortly after 11 p.m., summit host Charles Michel’s spokesman Barend Leyts tweeted that the plenary meeting had finished for the night and would reconvene at noon (1000 GMT) on Sunday.

Two full days and one night of discussions by the bloc’s 27 leaders oscillated between raw irritation over how the huge sums should be spent and what strings should be attached to a glimmer of hope that somehow a deal could materialize — if not this weekend, then at least within a few weeks.

An EU official, who asked to remain anonymous because the talks were ongoing, said Michel was “tying up some ends now” during a dinner with EU leaders before breaking for the night and reconvening with a new proposal early Sunday.

“We are pushing through. Michel is working carefully and doesn’t want to let it slip away now,” the official said.

The summit was supposed to end Saturday but more negotiations lay ahead for leaders as they dealt with their toughest crisis in years, one that has burdened the bloc with its worst recession ever. The pandemic has sent the EU into a tailspin, with 27-nation bloc’s economy estimated to contract 8.3% this year, according to the latest predictions. Around 135,000 of its citizens have died from COVID-19.

Michel held talks with Geman Chancellor Angela Merkel, French President Emmanuel Macron and the main leaders involved in the dispute in an open air space atop the Europa summit center before joining other EU leaders for dinner.

The EU executive has proposed a 750-billion euro fund, partly based on common borrowing, to be sent as loans and grants to the most needy countries. That comes on top of the seven-year 1-trillion-euro EU budget that leaders were fighting over even before COVID-19 slammed their continent.

Despite the urgency and seriousness of the crisis, there were deep rifts between some richer nations in the north, led by the Netherlands, which want strict controls on spending, and struggling southern nations like Spain and Italy, which have been especially hit hard by the pandemic and are looking for as much help as they can get.

Michel’s latest proposals reduce the proportion of grants in the rescue package and raise the proportion of loans that will need to be paid back, in an apparent enticement for a group of “frugal” nations led by the Netherlands, said an EU diplomat, who requested anonymity because the talks were still ongoing.

But the issue of how to track the rescue money remains the key sticking point, the diplomat said. Michel has proposed a measure that would stop short of allowing any country a veto on how governments spend the money.

Another diplomat described Michel’s new proposals as just the first step in what could be a long journey to agreement. The diplomat also spoke on condition of anonymity because they were not authorized to publicly discuss the closed-door negotiations.

Kurz said major issues still under discussion include the rule of law in EU nations and certainty on how the funds will be used.

Kurz and Dutch Prime Minister Mark Rutte are among the leaders of four “frugal” nations, also including Sweden and Denmark, that want conditions such as economic reforms attached to EU handouts to help countries recover from the economically devastating hit of the coronavirus pandemic and checks on how the money is being spent.