UN chief: World ‘at the breaking point’ due to inequalities

JOHANNESBURG  — Saying “we are at the breaking point,” the U.N. secretary-general made a sweeping call Saturday to end the global inequalities that sparked this year’s massive anti-racism protests and have been further exposed by the coronavirus pandemic. 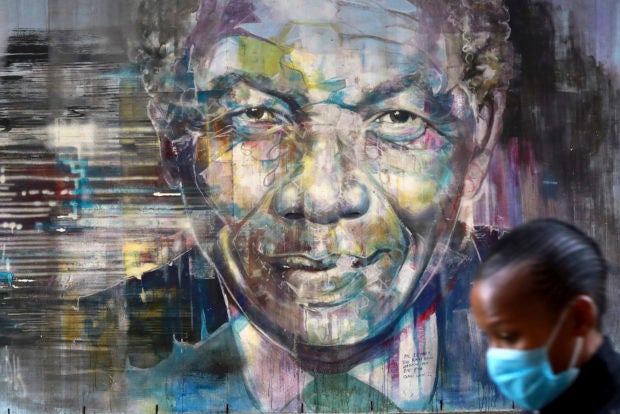 A woman wearing a face mask walks past a mural of former President Nelson Mandela in Cape Town, South Africa, Saturday July 18, 2020, as the country celebrates International Mandela Day. Mandela’s fight for freedom and human rights makes him the most influential person among Africa’s youth, according to a survey conducted across the continent. (AP Photo/Nardus Engelbrecht)

“COVID-19 has been likened to an X-ray, revealing fractures in the fragile skeleton of the societies we have built,” Antonio Guterres said as he delivered the Nelson Mandela Annual Lecture.

“It is exposing fallacies and falsehoods everywhere: The lie that free markets can deliver health care for all, the fiction that unpaid care work is not work, the delusion that we live in a post-racist world, the myth that we are all in the same boat.”

He said developed countries are strongly invested in their own survival and have “failed to deliver the support needed to help the developing world through these dangerous times.”

The U.N. chief’s address marked what would have been the birthday of former South African president and Nobel Peace Prize winner Mandela.
South Africa, the world’s most unequal country a quarter-century after the end of the racist system of apartheid, is quickly becoming one of the world’s hardest-hit nations in the pandemic and now makes up roughly half of Africa’s confirmed coronavirus cases.

The speech by the U.N. chief took aim at the vast inequality of wealth — “The 26 richest people in the world hold as much wealth as half the global population,” Guterres said — and other inequalities involving race, gender, class and place of birth.

These, he said, are seen in the world’s fragmented response to the pandemic as governments, businesses and even individuals are accused of hoarding badly needed testing, medical and other supplies for themselves.

The legacy of colonialism still reverberates, Guterres added, and it shows in global power relations.

Developing countries, and especially African nations, are under-represented at the levels of power including at financial institutions like the World Bank and political ones like the U.N. Security Council, whose five most powerful members — the U.S., Britain, France, Russia and China — date from the 1940s when the world body was created.

“Inequality starts at the top: in global institutions. Addressing inequality must start by reforming them,” Guterres said, offering some solutions.
A new generation of social protection is needed, including universal health coverage and perhaps maybe even a universal basic income he said, adding “individuals and corporations must pay their fair share.”

Education spending in low and middle-income countries should more than double by 2030 to $3 trillion a year, he said. And in the face of enormous shifts due to climate change, governments should tax carbon instead of people.

Answering questions after his speech, Guterres called for “massive support” for the developing world including debt write-offs. He said the suspension of debt payments until the end of this year, which was agreed upon by the G-20, the world’s 20 major economic powers, “is clearly not enough.”

And he noted, without naming names, that “leadership and power are not always aligned.”

The U.N. chief called for a new model of global governance with inclusive and equal participation.

“We see the beginnings of a new movement,” he said, adding it’s time to right the wrongs of the past.