Even firemen will be part of the action.

Interior Secretary Eduardo Año on Friday ordered the Bureau of Fire Protection (BFP) to join the Philippine National Police in assisting health workers in the transfer of COVID-19 patients from their houses to government isolation facilities.

According to Año, the BFP’s Emergency Medical Service and Special Rescue Units have the necessary health personnel and equipment to transport infected individuals.

On July 14, Año said the police would conduct “house-to-house” visits to COVID-19 patients, drawing criticism from various sectors. He later clarified that the police would only assist health workers and local government units. 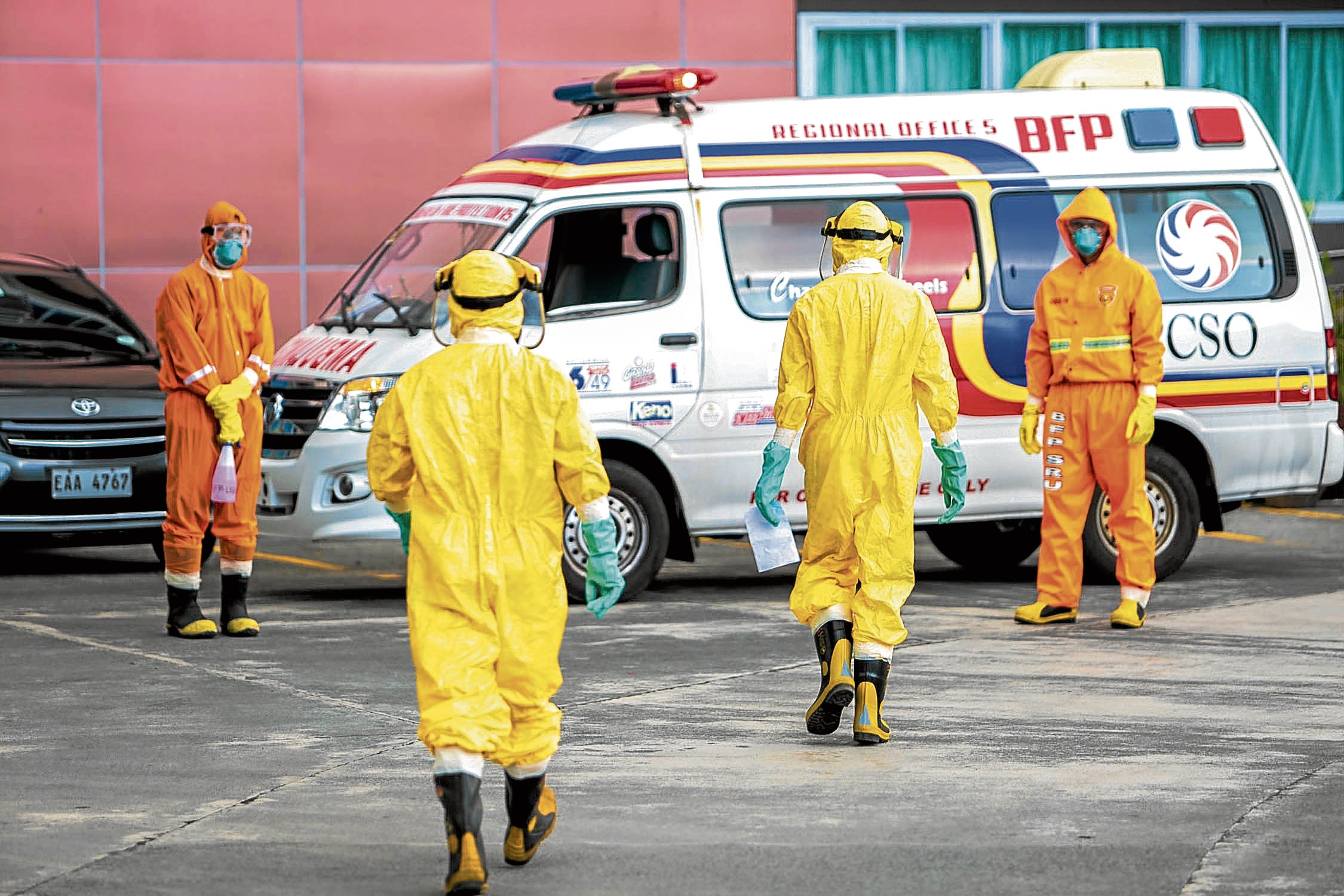 DIFFERENT ROLE Health workers together with personnel of the Bureau of Fire Protection in Albay province wait for a resident due to be tested for the coronavirus. —MARK ALVIC ESPLANA

“Again, I repeat, the police are there merely in a supporting role,” he said, adding that reports of the police and the military going on house-to-house searches for coronavirus-positive patients were “part of the disinformation campaign by unscrupulous individuals.”

Año warned that those who defied authorities would be penalized under Republic Act No. 11332, or the Mandatory Reporting of Notifiable Diseases and Health Events of Public Health Concern Act.

Under government’s guidelines, only those who have their own room and own bathroom and who do not share the house with a pregnant, elderly, and other vulnerable persons may be on home quarantine.

Aside from assisting local government units and health workers, the BFP has been ordered to intensify its contact tracing efforts, Año said.

He said the BFP had helped in the tracing of the close contacts of 18,871 COVID-19 patients.

Since the start of the pandemic, the BFP has mobilized 73.80 percent of its personnel (or 20,947 officers out of the 29,383 total manpower) to help in the efforts of the Department of the Interior and Local Government to fight the pandemic, Ano said.

He said a total of 1,207 BFP vehicles nationwide had been used for decontamination, water rationing, flushing at control points, patient transport and other ancillary services.

“Such remark is uncalled for. It does not achieve anything, but instill fear rather than trust in law enforcers and in the fight against the COVID-19 pandemic,” Drilon said in a statement on Friday.

“The individuals afflicted with the virus are not criminals, and they should not in any way be viewed as and compared to criminals. That is very wrong,” he said, adding: “Rather than threaten them with such remarks, let’s help them and their families.”

He advised Gamboa and other officials to be “more circumspect in their choice of words,” and reminded them that the contagion was a public health concern “and not a simple law-and-order issue.”

Drilon warned that COVID-19 patients who would refuse to be taken to state-run quarantine facilities might suffer the fate of those killed by policemen tasked to carry out the government’s bloody war on drugs.

“We must change our frame of mind: The enemy here is the virus, not the people,” he said. —With a report from Marlon Ramos