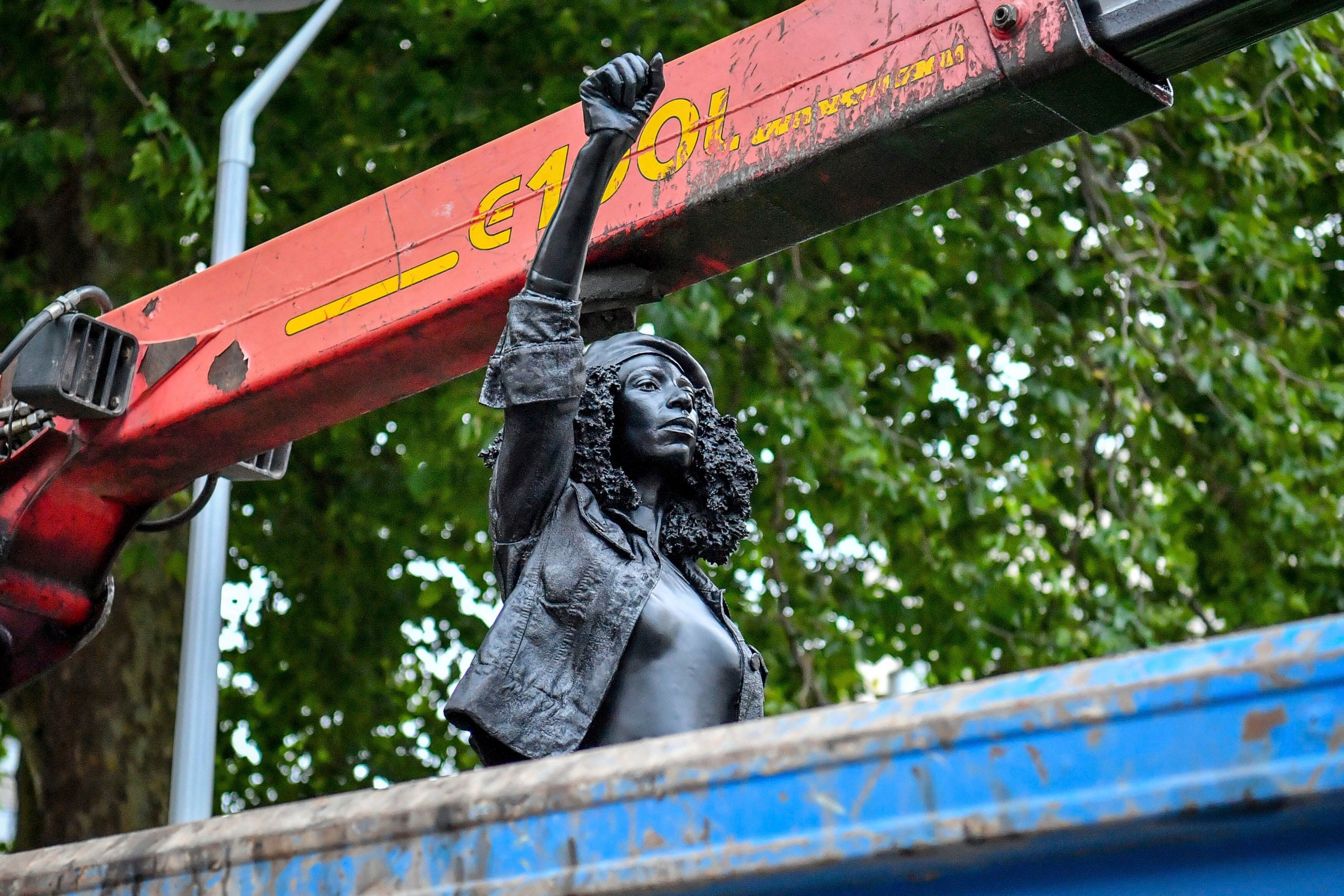 Contractors remove the statue “A Surge of Power (Jen Reid) 2020” by artist Marc Quinn, which had been installed on the site of the fallen statue of the slave trader Edward Colston, in Bristol, England, Thursday, July 16, 2020. The sculpture of protester Jen Reid was installed without the knowledge or consent of Bristol City Council and was removed by the council 24 hours later. (Ben Birchall/PA via AP)

LONDON, United Kingdom — A statue of an anti-racism protester in Britain which had replaced one of a slave trader was removed Thursday, local authorities said, in an ongoing battle over the symbolic empty plinth.

The authorities in the southwestern city of Bristol said they had taken down the sculpture — entitled “A Surge of Power” showing Black Lives Matter demonstrator Jen Reid with her fist raised — almost exactly 24 hours after it was placed on the plinth without permission.

“This morning we removed the sculpture,” Bristol city council said in a statement. “It will be held at our museum for the artist to collect or donate to our collection.”

The sculpture was secretly put in place on Wednesday, and was inspired by events in Bristol last month which saw anti-racism protesters remove the statue of slave trader Edward Colston and dump it in the local harbour.

Reid had attended the unveiling and said: “I can’t see it coming down in a hurry”.

But local authority officials insisted it was for the whole city to decide what should replace the Colston statue, which had stood on the plinth since 1895.

“The sculpture that has been installed today was the work and decision of a London-based artist,” Bristol mayor Marvin Rees said on Wednesday.

“It was not requested and permission was not given for it to be installed.

“The future of the plinth and what is installed on it must be decided by the people of Bristol.”

Protests in Bristol took place following the killing of African American George Floyd by police in the US state of Minnesota.

His death helped fuel global protests, including in the UK, where much of the focus of demonstrations has been on Britain’s colonial past.

A native of Bristol, his name is commemorated in many landmarks across the city.

The impact of the march in Bristol has seen calls for other statues in the UK to be taken down, including that of colonialist Cecil Rhodes at Oxford University’s Oriel College.

There have also been counter-demonstrations to protect some statues, including one of wartime leader Winston Churchill in London and the founder of the Scout movement, Robert Baden-Powell, in Poole on England’s south coast.