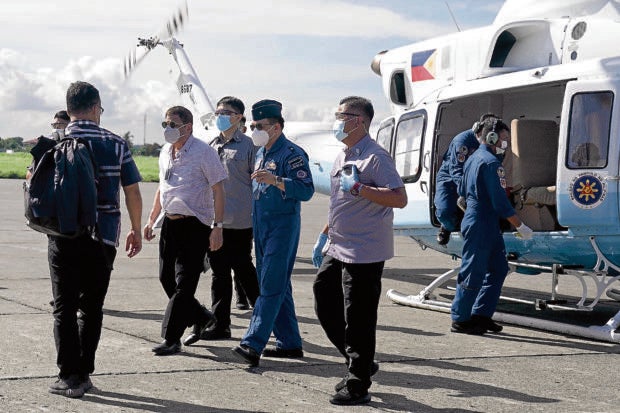 OLIGARCHS’ NEMESIS President Duterte walks to a waiting plane on his way to Jolo, Sulu province, to visit soldiers on Monday. In his speech to the troops, he took pride in destroying the country’s oligarchs without declaring martial law. He said he did not want to fight the elites but he would beat them up if they forced him. —MALACAÑANG PHOTO

MANILA, Philippines — Days after ABS-CBN’s application for a new legislative franchise was denied, President Rodrigo Duterte is “very happy” that he has “dismantled the oligarchy” in the country.

“Without declaring martial law, I destroyed the people controlling the economy and the people, and who don’t pay,” he told government troops in Jolo, Sulu province, on Monday afternoon. “They take advantage of their political power.”

The President was apparently contrasting himself with the late dictator Ferdinand Marcos, who declared martial law in 1972 allegedly to solve the ills of Philippine society that he had blamed on the oligarchs.

From the Greek word oligarkhes, oligarchy is any power structure controlled by a small number of people called oligarchs.

“Every election, then, now and tomorrow, it’s just one room. ‘Who’s our candidate?’ It’s just one family talking there,” Duterte said. “That’s how they played with my country.”

His remarks were released and aired by Radio Television Malacañang on Tuesday morning.

The 40-minute video clip was apparently edited and left out any mention of ABS-CBN or the other oligarchs mentioned by the President. But an unedited audio clip of the speech, obtained by the Inquirer, revealed that he mentioned the embattled media network a few times in his speech.

In the edited version and official transcript, the President recalled his campaign promise to go after corruption and “the rich who milk the government and the people.”

In the unedited audio clip, he said it was his “battle cry” to destroy the oligarchy in the last two years of his administration.

“This time, by the next two years, I will not give any concession at all. However legal the application is. If you’re an oligarch, I’ll tell you, ‘I don’t want a fight with you. Son of a bitch, if you force me, I will beat you up,’” said Mr. Duterte. His term ends on June 30, 2022.

The President lamented that government troops were dying for the oligarchs to “prop up a government that is useless if they are still there.”

His spokesperson, Harry Roque, said Duterte was not referring to the owners of ABS-CBN but to “oligarchies that he has dealt with personally.”

He also dismissed speculation that Duterte was referring to the media network in his speech, but he acknowledged that he was unaware that the video of the President’s speech had been edited.

Duterte claimed that ABS-CBN’s equipment were tax-free and that its land title for its compound on Mother Ignacia Avenue in Quezon City did not indicate the correct land area.

He also accused the network of “having holding companies” overseas.

“That is what Marcos went after. Cayman, then there’s a holding company in Hungary where they pour it in. They supposedly have an investment there and send money. But the investment is no more. The money won’t come back, so there’s no taxes. And to think that they talk and they play God over the lives of the Filipino,” Duterte said.

Duterte told the soldiers that he was extremely proud of himself for dismantling the bedrock of oligarchy. “I really beat them up. And they got a taste of my cussing that they did not expect.”

He further said: “All of them. Ayala, Lopez, wrote an apology. I cussed them, yet they apologized. It’s true, because of my anger … at what they did to my country.”

The President, however, denied that he was the one responsible for the closure of ABS-CBN, pointing out that it was the House committee on legislative franchises that rejected the franchise application.

By a vote of 70-11, the committee thumbed down on July 10 the network’s application for a new franchise on grounds that the US citizenship of its former chair and president, Eugenio Lopez III, violated the ban on foreign ownership and management of media, and that the issuance of Philippine Depositary Receipts to American investors might have also violated the constitutional ban on foreign ownership.

In the unedited audio clip, Duterte also mentioned the 1997 water concession agreement with Manila Water and Maynilad, and property developer DM Consunji, a part-owner of Maynilad he criticized for the collapse of a condominium in Davao City in 2019.

“I don’t know how the Ayala, Pangilinan and Consunji will pay the Filipino. It was way back in 1997. I have no quarrel with them, I have accepted their apology,” he said, reiterating the water concessionaires’ billing of wastewater treatment fees without establishing treatment plants.

Earlier, the government offered the water firms new contracts for distributing water in Metro Manila and two adjacent provinces, with Duterte warning that he will file cases of economic plunder against them if they reject it.

But in May, the President apologized to the Ayalas and Pangilinan for his “hurtful words” and expressed his readiness to discuss the water deals with them. This was after the two business groups made huge donations to the government’s response to the new coronavirus.