Mother of Korean Air chief gets suspended sentence for assault 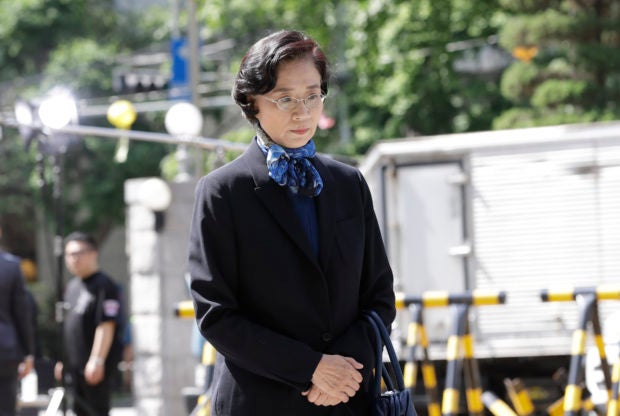 SEOUL — A South Korean court on Tuesday found the mother of Korean Air’s chief executive guilty of repeatedly assaulting her employees but gave her a suspended sentence.

Lee Myung-hee is the matriarch of the Cho family, which controls the Hanjin transport and logistics conglomerate where her son Cho Won-tae succeeded her husband as chairman following his death last year.

The family has come under scrutiny in recent years after being embroiled in multiple criminal probes over assault, embezzlement, and smuggling luxury goods, as well as a power struggle at the Hanjin group, which includes Korean Air.

Lee, 70, faced multiple allegations of assault against her staff — from drivers and housekeepers to construction workers — including cursing, kicking, slapping, and throwing a pair of scissors.

Seoul Central District Court convicted her on Tuesday but gave her a two-year jail sentence suspended for three years, and 80 hours of community service, on the grounds of her age and the fact that the victims did not want her to be punished.

“In contrast to Lee’s position as the wife of the chairman of a conglomerate, the victims, as drivers or housekeepers, had no choice but to endure Lee’s unfair actions,” the court said, according to Yonhap news agency.

It added Lee had “admitted her responsibility” and reached an agreement with the victims, factors which were taken into consideration.

The most notable incidents involving the family have centered on Lee’s two daughters – who previously held management positions at Korean Air – who became viral sensations for temper tantrums dubbed the “nut rage” and “water rage” scandals.

Cho Hyun-ah, the elder daughter, made global headlines in 2014 for kicking a cabin crew chief off a Korean Air plane after she was served macadamia nuts in a bag rather than a bowl.

Her younger sister Cho Hyun-min was accused two years ago of throwing a drink into an advertising agency manager’s face during a business meeting.