MANILA, Philippines — Four years after the historic Permanent Court of Arbitration (PCA) ruling in favor of the  Philippines, majority of Filipinos still believe that the Philippine government should assert the country’s rights over the islands in the West Philippine Sea, the latest SWS survey released Tuesday showed. 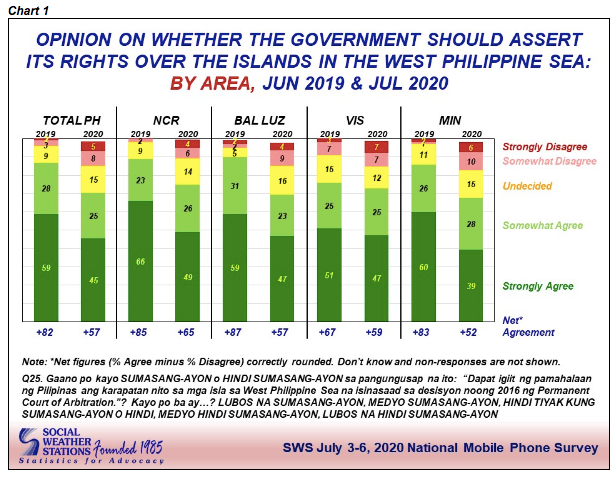 According to the survey conducted from July 3 to 6, seven out of 10—or 70 percent—of Filipinos said that they agree that the government should assert its rights.

Of the 70 percent, 45 percent answered in the survey that they “strongly agree,” while 15 percent said that they “somewhat agree.”

Meanwhile,13 percent said that they disagree that the government should assert its rights, and the remaining 15 percent of respondents said that they were undecided.

Last year’s SWS survey showed that 87 percent of Filipinos say that the government should assert its rights in the disputed territories, with only five percent said that they disagree, while eight percent were undecided.

The latest survey also revealed that 82 percent—or four out of five Filipinos— said that the Philippines should form alliances with democratic countries that are ready to defend the Philippines’ territorial rights in the disputed islands.

Nine percent, meanwhile, disagreed that the country should not form alliances, while eight percent of respondents said they were undecided.

It was on July 12, 2016 when the PCA decided that the Philippines has exclusive sovereign rights over the West Philippine Sea, and invalidated China’s “nine dash-line” claim over the disputed territories.

In response, China rejected the appeal, saying that the award was “illegal and invalid.”