US bases on Okinawa locked down over virus spike

TOKIO, Japan — Two US Marine bases in Japan’s Okinawa have been put into lockdown after dozens of coronavirus infections, with local officials criticizing the American military’s containment efforts. 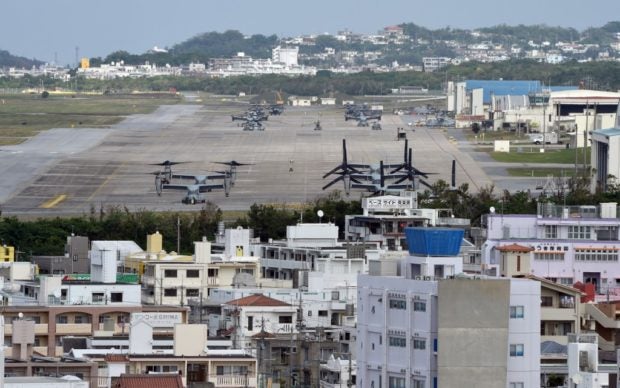 This file photo taken on November 14, 2014 shows multi-mission tiltrotor Osprey aircraft at the US Marine’s Camp Futenma in a crowded urban area of Ginowan, Okinawa prefecture. Government spokesman Yoshihide Suga said on July 13, 2020 that 62 cases have been detected in recent days in US forces, most of them at US Marine Corps Air Station Futenma and Camp Hansen. Photo by TORU YAMANAKA / AFP

Additional restrictions are also in place at the seven other Marine bases in the region after the spike in cases, a spokesman confirmed.

There are tens of thousands of US servicemen stationed on the southern Japanese island, which has recorded roughly 150 civilian COVID-19 infections.

Government spokesman Yoshihide Suga said Monday that 62 cases have been detected in recent days among US forces, most of them at US Marine Corps Air Station Futenma and Camp Hansen.

In response to the outbreak, “enhanced Okinawa-wide protective measures” were announced for all nine Marine Corps bases in the region, spokesman Major Ken Kunze told AFP.

“Additional measures are in place for Camp Hansen and MCAS Futenma to restrict people from entering and leaving those facilities,” Kunze said.

There are approximately 20,000 US Marines in Okinawa, along with thousands more troops from other US military services.

Their presence on the island is a longstanding sore spot, with many in the region arguing they bear a disproportionate share of the burden of hosting American forces.

The spike in infections has created tensions with local officials, including Okinawa governor Denny Tamaki, who said Saturday he was “shocked” by the number of cases.

“I can’t help but feel serious doubts about US measures against infections,” he told reporters.

Tamaki said he has asked US forces to halt the arrival of troops rotating into the country and to boost anti-contagion measures.

It is unclear where the bases’ clusters of infections originated, with Kunze saying an investigation was ongoing.

“We are also looking into reports of gatherings and directing individuals to quarantine… Leadership in Okinawa is working non-stop to curtail the spread,” he said.

Local media said there were concerns about incoming troops and their families who are being quarantined in local hotels off-base.

An Okinawa government official said the prefecture would ask the central government and US forces to share information about cases among the military more quickly.

The prefecture will also ask for incoming troops and their families to observe their arrival quarantine on-base, they said.