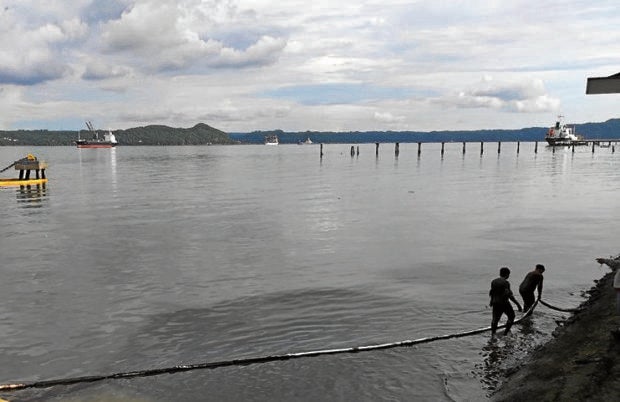 OIL EVERYWHERE Bunker fuel that leaked from Power Barge 102 spread into the waters of Iloilo City up to nearby Guimaras Island after an explosion tore a hole in its hull on July 3. —PHOTO COURTESY OF BFP ILOILO CITY

ILOILO CITY, Iloilo, Phil—The Philippine Coast Guard (PCG) has filed a criminal complaint against the operator of a damaged power barge that spilled thousands of liters of bunker fuel into the waters of Iloilo and Guimaras Island.

In a complaint filed at the Iloilo Provincial Prosecutor’s Office on Friday, the PCG accused AC Energy Philippines and its officials of violating Republic Act No. 8550 (Fisheries Code) for negligence that led to the oil spill which contaminated 88.8 hectares of mangroves and 27 coastal villages in Iloilo City, Dumangas town in Iloilo province and Guimaras Island.

“Let this incident be a reminder to all industry stakeholders that even the slightest negligence can pose direct or indirect threat on the health and safety of the people, as well as living and nonliving aquatic resources,” Vice Adm. George Ursabia Jr., PCG commandant, said in the statement.

Ayala-owned AC Energy Philippines said it had yet to receive a copy of the complaint but reiterated its commitment to cooperate with the government and undertake the cleanup of affected areas.

“Even with the filing of this case … the company undertakes and commits to continue cooperating in good faith with the PCG and the other government units and agencies to ensure that the oil spill cleanup is done properly and completed soon, and that the needs of the affected communities and groups are provided for,” it said in a statement.

The oil spill was triggered by an explosion that tore holes on Power Barge 102 off Barrio Obrero in Iloilo City on July 3.