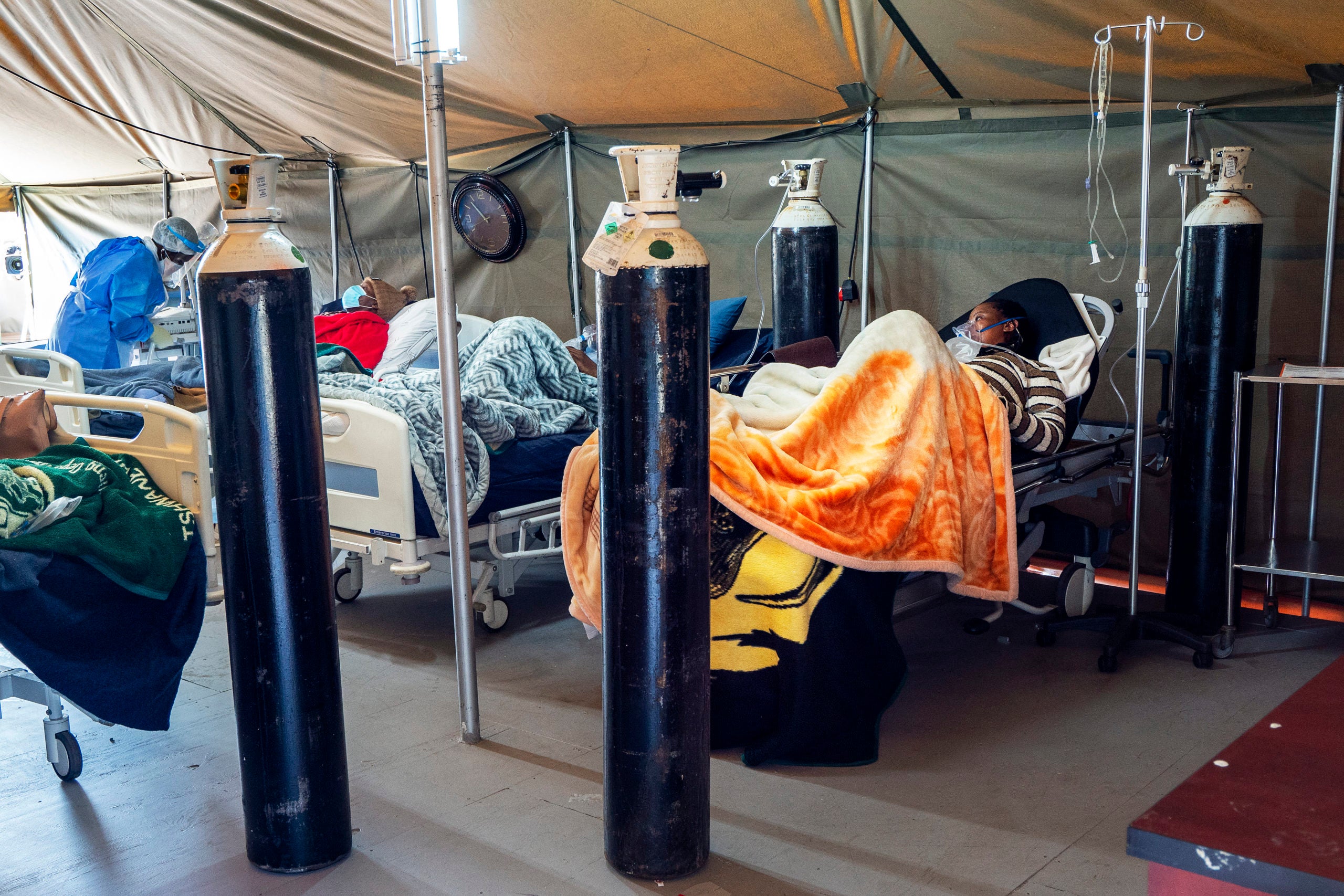 Covid-19 patients are being treated with oxygen at the Tshwane District Hospital in Pretoria, South Africa, Friday, July 10, 2020. Health Minister Zweli Mkhize this week said South Africa could run out of available hospital beds within the month. “The storm that we have consistently warned South Africans about is now arriving,” he told lawmakers. The African continent overall has over 523,000 confirmed virus cases after passing the half-million milestone on Wednesday. But shortages in testing materials mean the true number is unknown. (AP Photo/Jerome Delay)

JOHANNESBURG  — Confronted by surging hospitalizations due to COVID-19, South Africa is considering a return to tighter restrictions to combat the disease, which officials say may soon overwhelm the country’s health system.

President Cyril Ramaphosa has announced he will speak to the nation about the crisis on Sunday evening after top health officials have warned of shortages of hospital beds and medical oxygen.

South Africa’s rapid increase in reported cases has made it one of the world’s centers for COVID-19, as it is ranked as the 9th country most affected by the disease, according to Johns Hopkins University. The country has reported increases of more than 10,000 confirmed cases for several days and the latest daily increase was nearly 13,500. South Africa accounts for 40% of all the confirmed cases in Africa, with 264,184, including 3,971 deaths, according to the Africa Centers for Disease Control and Prevention on Sunday.

South Africa imposed one of the world’s strictest lockdowns in April and May, including closing virtually all mines, factories and businesses, and a ban on sales of liquor and cigarettes. The measures slowed the spread of the coronavirus but South Africa’s economy, already in recession, contracted dramatically, increasing unemployment above 30% and hunger.

In June the country began relaxing restrictions to allow millions of South Africans to return to work. However, within a few weeks, the country’s numbers of confirmed cases and hospitalizations increased dramatically.

More than 30% of South Africa’s cases are in the economic hub of Gauteng province, which includes the largest city, Johannesburg, and the capital, Pretoria. The tourist center of Cape Town also has a high number of cases. Johannesburg’s densely populated Soweto township has a high concentration of cases, according to officials.

In his speech Sunday evening, Ramaphosa is expected to announce whether his government will reimpose some strict lockdown regulations in Gauteng, where officials are concerned that the province’s hospitals could soon be overwhelmed. Some top Gauteng officials have urged the government to reinstate restrictions, including limitations on the sale of alcohol and restrictions on movements.

South Africa has carried out 2.1 million tests, on its population of 58 million. Because of an international shortage of testing materials, South Africa in June experienced a long delay in the time to get test results, at one point reaching 12 days in government clinics. The situation has improved and the average time to get test results is five days in by public laboratories and two days in private labs, according to the latest figures issued by the National Institute for Communicable Diseases.

Africa’s 54 countries have reported 577,904 cases, according to the Africa Centers for Disease Control and Prevention. The continent’s confirmed cases are concentrated in four countries — South Africa, Egypt with 81,158 cases, Nigeria with 31,987 cases and Algeria with 18,712 cases – which together make up more than 65% of the continent’s cases. The number of actual cases in Africa is believed to be much higher, as the testing rate is very low in many countries.

Read Next
Pope ‘very distressed’ over Turkey’s Hagia Sophia conversion to mosque
EDITORS' PICK
A gem of a residence in the new normal
Been there, done that but what’s the difference between MECQ and GCQ?
BREAKING: 3,226 latest COVID-19 cases bring PH’s total to 106,330
Water remains our saving grace right now
PNP: Checkpoints back in MECQ areas
Smart 5G goes live
MOST READ
MECQ guidelines in infographics
MECQ in NCR, other areas: Mass transportation suspended, quarantine pass required anew
Duterte heeds frontliners’ plea, reimposes MECQ in Metro Manila, other areas Aug. 4 -18
Doctors group to Duterte: ‘There was never a call for a revolt’
Don't miss out on the latest news and information.