Trump, Biden try to outdo each other on tough talk on China 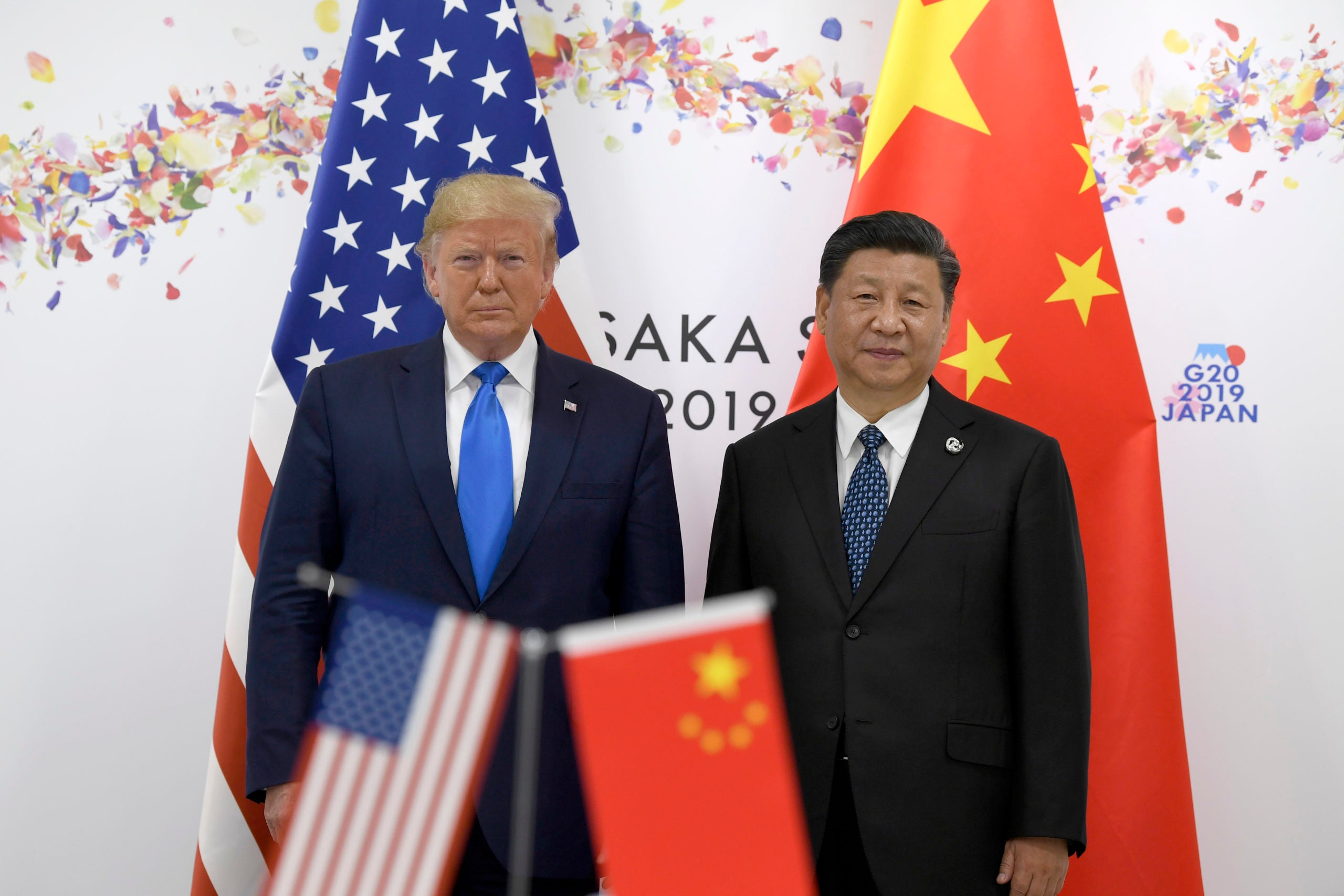 FILE – In this June 29, 2019, file photo President Donald Trump, left, poses for a photo with Chinese President Xi Jinping during a meeting on the sidelines of the G-20 summit in Osaka, Japan. China has fast become a top election issue as President Donald Trump and Democrat Joe Biden engage in a verbal brawl over who’s better at playing the tough guy against Beijing. (AP Photo/Susan Walsh, File)

WASHINGTON  — China has fast become a top election issue as President Donald Trump and Democrat Joe Biden engaged in a verbal brawl over who’s better at playing the tough guy against Beijing.

The Trump campaign put out ads showing Biden toasting China’s Xi Jinping, even though Trump did just that with Xi in Asia and hosted the Chinese leader at his Florida club. Spots from the Biden campaign feature Trump playing down the coronavirus and praising Xi for being transparent about the pandemic, even though it’s clear China hid details of the outbreak from the world.

“I think it’s going to be absolutely critical, but I don’t know who is going to have the advantage,” said Republican pollster Frank Luntz. He has been reviewing the ads and thinks China is one of the three leading issues along with the economy and the handling of the coronavirus.

China is not just a foreign policy issue in the November election. It’s an issue that runs deeply through the troubles with the virus, which tanked the U.S. economy. Voters also will be asking themselves whether Trump or Biden can best defend the U.S. against China’s unfair trade practices, theft of intellectual property rights, rising aggression across the globe, and human rights abuses.

“Which person looks more subservient to the Chinese leaders is the person who’s in more jeopardy,” Luntz said.

As the coronavirus spread throughout the U.S., a Pew Research Center poll in March found Americans with increasingly negative views of China, with 66% saying they had an unfavorable opinion. That was the most negative rating since the question was first asked in 2005. The same poll found 62% of Americans calling China’s power and influence a major threat to the U.S., compared with 48% two years ago.

An NBC News/Wall Street Journal poll in late May and early June found registered voters about evenly divided over which of the candidates would be better at dealing with China, with 43% saying Trump compared with 40% for Biden. In the poll, 5% viewed Trump and Biden equally, while 10% said neither would be good.

Trump’s advisers see China as an opportunity to portray Biden as deferential to Beijing when he was President Barack Obama’s vice president and point person on Asia, according to three campaign officials and Republicans close to the White House. The campaign made a push in May to link Biden with China, complete with an advertising blitz, but the effort did little to raise Trump’s poll numbers.

The Trump campaign credits the president with signing the first phase of a trade deal with China in January, which boosted stock markets and seemingly ended a bruising trade war.

Republicans want to tether Biden to past multinational agreements and trade deals blamed for an exodus of manufacturing jobs across the Midwest. Trump campaign officials believe they missed that opportunity in trying to wrest Midwest states from the Democrats in 2016.

The White House lists more than two dozen actions the administration has taken since April to protect U.S. jobs, businesses, and U.S. supply chains from damage caused by the Chinese Communist Party’s policies. That includes last week’s move to impose sanctions on Chinese officials for their roles in repressing religious and ethnic minorities. More than a few administration officials have recently delivered speeches calling out China’s policies.

That message could strike a chord with the increasing number of Americans who have an unfavorable view of the Asian power. There also is rising concern about U.S. dependence on China for supplies — something that drew attention during the scramble for protective gear for U.S. health workers.

One more line of off-and-on attack by Trump, despite no proof of impropriety, involves the business ties that Biden’s son, Hunter, has had with China.

The Biden campaign is working to portray Trump as someone who talks tough but has failed to hold China accountable for its response to the virus and has signed only the first phase of a trade deal. The campaign says that while that deal was being negotiated, Trump was saying that COVID-19 would “miraculously” be gone in April and now it’s July and cases are surging and the death toll rising.

“Trump said he’d get tough on China,” one of Biden campaign ads says. “He didn’t get tough. He got played.”

The Biden camp highlights other Trump vulnerabilities on China that surfaced in former national security adviser John Bolton ‘s new book, which claims Trump urged Xi to increase Chinese purchases of soybeans and wheat to help him Trump farm states in November. Bolton also wrote that Trump told Xi that building detention camps for hundreds of thousands of Muslims and other ethnic and religious minorities in western China was “exactly the right thing to do.”

Trump claims he’s been tougher on China than any other president. The Biden campaign says Trump has weakened relations with allies and pulled the U.S. out of international organizations, giving China more room to exert its own influence. Biden campaign officials say that if Biden is elected, he will restore relationships with U.S. allies and rally the international community to form a united front against China.

“What’s striking to me is the extent to which the Trump campaign seems to have thought that China would be a winning issue for them,” said Jeff Prescott, a foreign policy adviser for Biden.

“He was hiding from the warning signs coming in on the pandemic to get his trade deal done with Xi Jinping and then spent all of January and February and into March praising Xi — praising China’s handling of the coronavirus — and talking up his very flimsy phase one trade deal,” Prescott said.

That first phase is smaller than the comprehensive deal Trump had hoped for and leaves many of the thorniest issues between the two countries for future talks. Few economists expect any resolution of the next phase before November. Even Trump said this past week that it’s not a top priority before then.