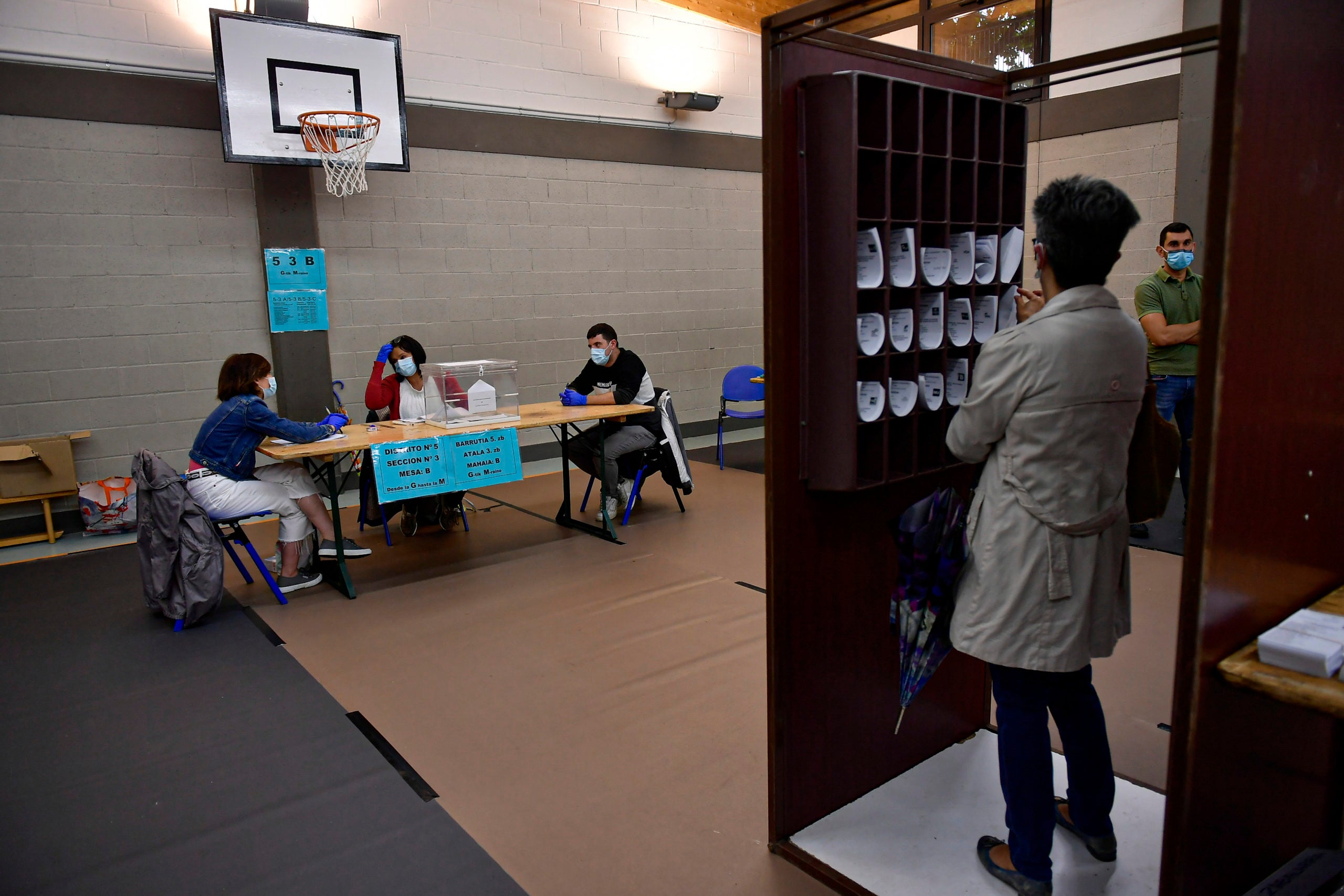 A woman prepares her vote while staff members of a polling station wear face masks to help curb the spread of the coronavirus during the Basque regional election in the village of Durango, northern Spain, Sunday, July 12, 2020. Basque authorities are displaying special rules and practices in the protection against the coronavirus. (AP Photo/Alvaro Barrientos)

BUDAPEST, Hungary  — Countries in Eastern Europe are facing rising waves of coronavirus infections, leading to new restrictive measures such as the mandatory use of face masks in Croatia and travel bans or quarantines to be imposed by Hungary.

Hungarian authorities said Sunday that they would put countries in three categories — red, yellow, and green — based on their rate of new coronavirus infections, and would impose restrictions, including entry bans and mandatory quarantines, depending on which country people were coming from.

“We see worrisome signs about an increase in the number of cases in the neighboring countries, Europe and the whole world,” said Gergely Gulyas, Prime Minister Viktor Orban’s chief of staff.

Foreigners from countries in the red category — those with a high rate of infections, including Albania, Ukraine, Belarus and practically all of Asia, Africa and South and Central America — are banned from entering, while Hungarian citizens arriving from those locations will have to stay quarantined for two weeks or until they test negative twice, 48 hours apart.

Both Hungarians and foreigners arriving from countries in the yellow category — which includes, among others, Bulgaria, Portugal, Romania and Sweden, as well as Britain, Russia, Serbia, Japan, China, and the United States — will have to quarantine for two weeks, but will be allowed out if they test negative for the virus: once for Hungarians, or two negative tests 48 hours apart in the case of foreigners.

Gulyas said the new rules would take effect Wednesday and would be reviewed at least once a week.

Romania announced a new high of infections on Saturday, with 698, while 456 new cases were reported Sunday.

Serbia reported 354 new infections on Saturday, although there have been increasing doubts about the accuracy of the figures. Officially, the country has over 18,000 confirmed infections and 382 deaths since March, with health authorities warning that Serbian hospitals are almost full due to the latest surge in cases.

Croatia, whose Adriatic Sea coast is a major tourist destination, will make wearing masks mandatory in stores from Monday, while restaurant staff, but not patrons, will also have to wear face coverings.

Infections are also on the rise in India, which has the most cases after the United States and Brazil, with a record surge of 28,637 cases reported in the past 24 hours as authorities announced a weeklong lockdown beginning Tuesday in the key southern technology hub of Bangalore, where the offices of top tech companies like Microsoft, Apple and Amazon are located.

South Korea has also reported an uptick in infections around Seoul, its capital, and other major cities, with 44 new cases over the past 24 hours.

The pandemic is also affecting elections in Europe.

In Poland, which is holding a runoff presidential vote Sunday between conservative incumbent Andrzej Duda, and Rafal Trzaskowski, the liberal, pro-European Union mayor of Warsaw, voters must wear masks and gloves, maintain social distancing and use hand sanitizer. They even can use their own pens to mark ballots. Ballot boxes are being disinfected regularly and the polling stations are ventilated.

Similar safety measures have been put in place for elections in two northern regions in Spain, but authorities in both the Basque Country and Galicia have prohibited over 400 people who have tested positive for the virus from leaving their homes to vote. Spain’s Supreme Court backed the decision in a ruling Friday in response to a complaint by opposition parties in both regions.

In the U.S., there has been an upturn in coronavirus deaths, driven by fatalities in states in the South and West, with the seven-day rolling average for daily reported deaths increasing from 578 two weeks ago to 664 on July 10 — still well below the heights hit in April — according to an Associated Press analysis of data from Johns Hopkins University.

A coronavirus death, when it occurs, typically comes several weeks after a person is first infected. And experts predicted states that saw increases in cases and hospitalizations would, at some point, see deaths rise too. Now that’s happening.

“It’s consistently picking up. And it’s picking up at the time you’d expect it to,” said William Hanage, a Harvard University infectious diseases researcher.

Researchers now expect deaths to rise for at least some weeks, but some think the count probably will not go up as dramatically as it did in the spring.